Thanks for Sharing Review - That Shelf Skip to main content 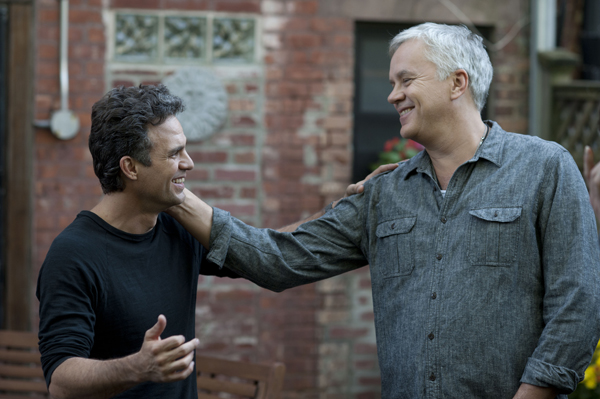 It might only just be finding a theatrical release now in Canada (after premiering at TIFF in 2012) to capitalize on the relative success of the similarly pitched Don Jon, but as far as looks at sex addiction go writer and director Stuart Blumberg’s Thanks for Sharing is almost infinitely preferable. It’s a sympathetic, funny, and at times brave look at a trio of men overcoming their demons and figuring out how to get back up after stumbling along the way.

Told primarily through the actions of a single therapy group devoted to addicts trying to healthily mediate their unhealthily overactive sexual impulses (and in many cases other intertwined addictions), Blumberg follows a trio of men at different points in the recovery process. Adam (Mark Ruffalo) has just reached a milestone in his recovery, lasting several years without a relapse, and he finally feels ready to start a healthy and committed relationship with a woman he’s sweet on (Gwyneth Paltrow), but he’s afraid of being honest with her. Mike (Tim Robbins) leads the group and has been sober even longer, until his former drug addict son (Patrick Fugit) resurfaces out of the blue. Doctor Neil (Josh Gad) has just started and has been placed in the group under a court order for his inappropriate and sleazy behaviour that masks a deeper cry for help. Adam tries sponsoring Neil, but he can’t deal with the younger man’s lack of desire to help himself. Solace and a kindred spirit for Neil is found in Dede (pop singer Pink), and the two seem to mutually want to keep each other out of trouble.

Blumberg actually crafts a better story here than his previously (and inexplicably) more lauded writing effort, The Kids Are Alright. As a first time director, he still has a bit of trouble juggling the three overlapping stories, but at least each comes with their own set of concrete rules, truths, and strong characters. It’s no huge shock that at some point each of the characters – addict or not – will slip up, make mistakes, fall down, pick themselves up, or ultimately find solace in life’s little triumphs and living one day at a time. The details of each particular situation, as do the reactions from the loved ones around these people. Adam seems to have gotten by the past several years by largely being a social hermit, only hanging out with people if he can actually have full control over the situation or if he made the plans in advance. Mike has constant guilt as a result of a drinking and screwing lifestyle that left both him and his wife with Hepatitis C, but he’s almost entirely written off a son and waiting for him to ruin his life again. Neil, to put it bluntly, isn’t even remotely likeable at first, but the blocks he has in his recovery and his moments of personal disappointment are palpable.

There isn’t a huge need for flashy visuals or an in-depth discussion of the addiction or recovery. It’s made simple and personal through each of the character’s personalities what they need to do to get better, and while the three overlapping journeys never quite meet up satisfyingly down the stretch, each actor brings a dependability and seriousness to their story.

Ruffalo and Paltrow really aren’t doing anything above and beyond the usual work they’re known for, and at the halfway point when the script dictates that there be a falling out between the couple, Paltrow disappears and gets reintroduced a bit too late to feel like anything other than a plotting gambit designed to create a Hollywood resolution. Still, while she’s gone, Blumberg and Ruffalo don’t shy away from how dark Adam’s life can get, and together they chronicle the cliff he goes over quite beautifully. Robbins hasn’t been given a role this good in quite some time, and he certainly makes the most of it thanks to being pitted along Fugit and Joley Richardson as his wife, both of whom give Robbins a lot to work with. Gad asserts himself nicely in a hard role to play, but early on one suspects that Blumberg is suggesting there might be comedic value in this character that’s incredibly sad. Granted, most comedy comes from darkness, but at times Blumberg is trying far too hard to wring as many laughs as possible from the material by way of chronically embarrassing Gad every step of the way. But in the sign of a true pro, Gad rises above what he’s given to make Neil surprisingly sympathetic for a character saddled with a creepily incestuous subtext with his mother (Carol Kane). There’s a bravery to Gad’s work that the rest of the movie might not be cognizant of.

Still, when looked at compared to something as shallow and soporific as Joseph Gordon-Levitt’s Don Jon, Thanks for Sharing feels like a welcome alternative. Instead of quick cutting shortcuts and baseline stereotypes, Blumberg comes a lot closer to depicting real people going through the throes of a disease most people wouldn’t even think is a problem. It’s uneven overall, but the humanity can’t be denied, and hand in hand with the performances, it goes quite a long way.