Crossovers are a staple of comic books. While I’m loving the recent Doctor Who/Star Trek: TNG series from IDW, other attempts at franchise merging have not been as successful. Although there are many horrible contenders for worst comic book crossover (I’m looking at you, Archie Meets The Punisher and The Avengers on Late Night with David Letterman), there was one repeat offender I just couldn’t ignore: Superman.

Yep, Supes has been forced into meeting after ridiculous meeting with some of the weirdest folks (and non-folks) you can possibly imagine. Well, maybe not weirder than what you’ll find in the Superman Crossover section of FanFiction.net, but still.

This late ’70s adventure was DC’s attempt to capitalize on the most popular athlete in the world at the time – and let’s be so grateful they did, because we got Superman vs. Muhammad Ali out of the deal. Ostensibly about an invading alien army that can only be stopped by boxing them in the face, I guess, this comic is widely acknowledged as not being too terrible – but it makes the list for the thought alone.

It just didn’t make that much sense to split up the Alien and Predator franchises (but then again, what on this list does make sense?), so they’re taking the ninth and eighth spots together. Batman was the first DC superhero to take on the Predator, but not wanting to be left out of the “fun,” Supes got his chance in 1987. In an out-there storyline involving Central America, global genocide, mercenaries, and mad scientists, it was a real light-hearted romp.

Just eight years later, Superman was forced to face off against the Alien Xenomorphs. Not to be outdone, this comic featured Lois Lane trying to be Sigourney Weaver, male chestbuster impregnation, and embryo teleportation. Finally, much too recently to be okay, Batman and Superman team up to fight a ship filled with both creatures that crash-landed in the Andes. Because screw your franchises, that’s why.

Now technically, Superman was actually making an appearance in Jerry Lewis’s series, The Adventures of Jerry Lewis: a real series of comic books which really existed, and took up the mantle after The Adventures of Dean Martin and Jerry Lewis finished its run. Superman’s adventure with Jerry is decidedly less heroic than usual; this time, Jerry steals the super suit and Supes has to jet in to get it back, leaving Jerry naked and facing down a gang of thugs. Dick move, Superman. Dick move.

This recent entry is an alternate-dimension romp which answers the age-old question: what would happen if Superman and Cheetara met? Oh, wait – no one ever asked that! Well, tough luck, because it happened. The Thundercats are thrown into Metropolis while battling Mumm-Ra’s mutants in front of a convenient dimensional portal, and it all ends with Supes and Lois putting the Eye of Thundra on display in their love shack/Fortress of Solitude. Obviously.

The early ’80s brought us a match-up we never even knew we wanted: the Man of Steel versus He-Man. After conveniently flying through yet another dimensional portal (funny how those seem to be popping up all over the place on this list), Superman finds himself in Eternia. Vulnerable to both kryptonite and magic, Supes falls prey to one of Skeletor’s spells and is forced to fight He-Man at Skeletor’s behest. There are a lot of muscles in this one-off. 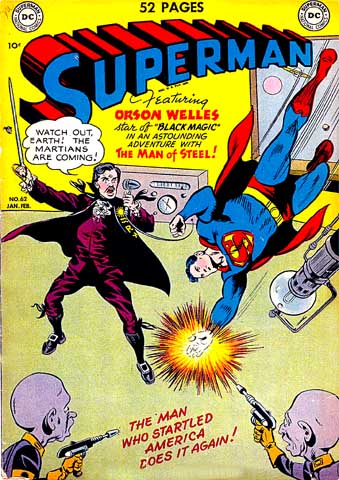 Stay with me here, folks, because I’m not making any of this up. After accidentally stumbling upon an empty, automated rocket in the mountains, Orson Welles clambers in and finds himself shot off to Mars. Welles is greeted by good ol’ fashioned little green Martian men, who model themselves after Hitler and the Nazis, and offer Welles the position of Martian Minister for Propaganda. Welles manages to escape and send a broadcast from the Martian broadcasting centre to Superman on Earth, pleading to be saved. While waiting for Superman to arrive, Welles distracts the Martians with magic tricks. After returning Welles to Earth, Clark pitches the whole story to Perry White, who rejects it on the grounds of being way too ridiculous.

You guys should have listened to Perry. He knows what’s up.

And now, for something completely different… During the sixth season of the incredibly popular sitcom I Love Lucy, the Ricardo household is visited by – who else! – Superman, played by George Reeves. The episode basically revolves around Lucy and Ricky trying to snag Superman to show up at their son’s birthday party, but ends with some hijinks where Lucy ultimately has to be saved from teetering off a high ledge by the Man of Steel.  I assume at some point she also has some ‘splainin’ to do. 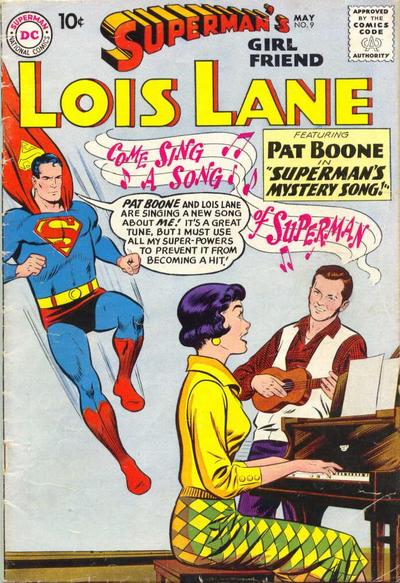 In case you forgot that misogyny existed, I present to you the Superman’s Girlfriend Lois Lane series from the late ’50s. In Superman’s Mystery Song, Lois becomes obsessed with Pat Boone – and who isn’t, amirite ladies?? In order to grab an interview with the singer for the paper, Superman abducts Boone after his concert and flies him to Daily Planet headquarters – totally normal and acceptable behaviour! Boone runs into Lois, and instantly loves her voice so much that he just has to do a duet with her. About Superman, of course. But then, dickery! Supes does everything within his power to make sure their duet doesn’t become a hit! He says it’s because the song could “compromise his secret identity,” but we all know that Clark was jealous and just didn’t want Lois to succeed at something with another man. Awkward!

I’d like to be able to tell you that DC sold out and were doing this for a quick buck, but in reality, the Quik Bunny comic crossover was given away to kids for free, so I really can’t think of any excuse for this one except terrible advertising. The jarring difference in animation style between Supes and the Bunny is hilarious on the cover alone, and just becomes more ludicrous throughout the rest of the comic. Superman and the Quik Bunny have to fight the Weather Wizard and… oh, it doesn’t really matter, does it? There’s an ethnically diverse group of children and the Bunny saves the day by drinking Nestle Quik. The moral of the story is that even Superman is not above whoring himself out for capitalism.