Since at least the time of the Ancient Greeks the fool was both entertainer and truth teller, able through humour to tell stories of importance in a way that proves equal parts palpable and profound. Sometimes the work would be a broad comedy, the hilarity masking the horror, with jokes meant to poke fun and provoke a reaction in the audience on a superficial level only to have the more intellectually relevant elements snuck in. It’s the classic case of the sugar helping the medicine go down smoothly. It’s a fine art, and getting the balance right is nigh on possible as judged by the many failures, with works coming across either as pedantic or trivializing the seriousness of the situation.

What a refreshing fact, then, that The Big Short is in its own way a masterpiece. I’m as shocked as anyone – who would have thought the guy behind Anchorman would be the one to bring the collapse of the international banking system in 2008 to the big screen in a way that’s easily some of the most fun you’ll have at the cinema, while at the same time leaving you with a greater appreciation for the native absurdity of the entire situation.

This isn’t quite the Dr. Strangelove for the financial set but it’s pretty damn close, with the absurdity of nuclear weapon-like financial instruments very much in keeping  with a man riding a bomb as if it a bucking bronco. The film does many risky things – breaking the fourth wall constantly, the narration by Ryan Gosling could easily have come across as snide and pandering. The overt explanations, including those by Anthony Bourdain making a stew and Margot Robbie in presumably an even more delicious vessel of hot water, are both cheeky and compelling. Steve Carrel once again shows that he’s a titanic talent, managing that razors edge of performance between obnoxious and sympathetic the way few actors have ever done as well. 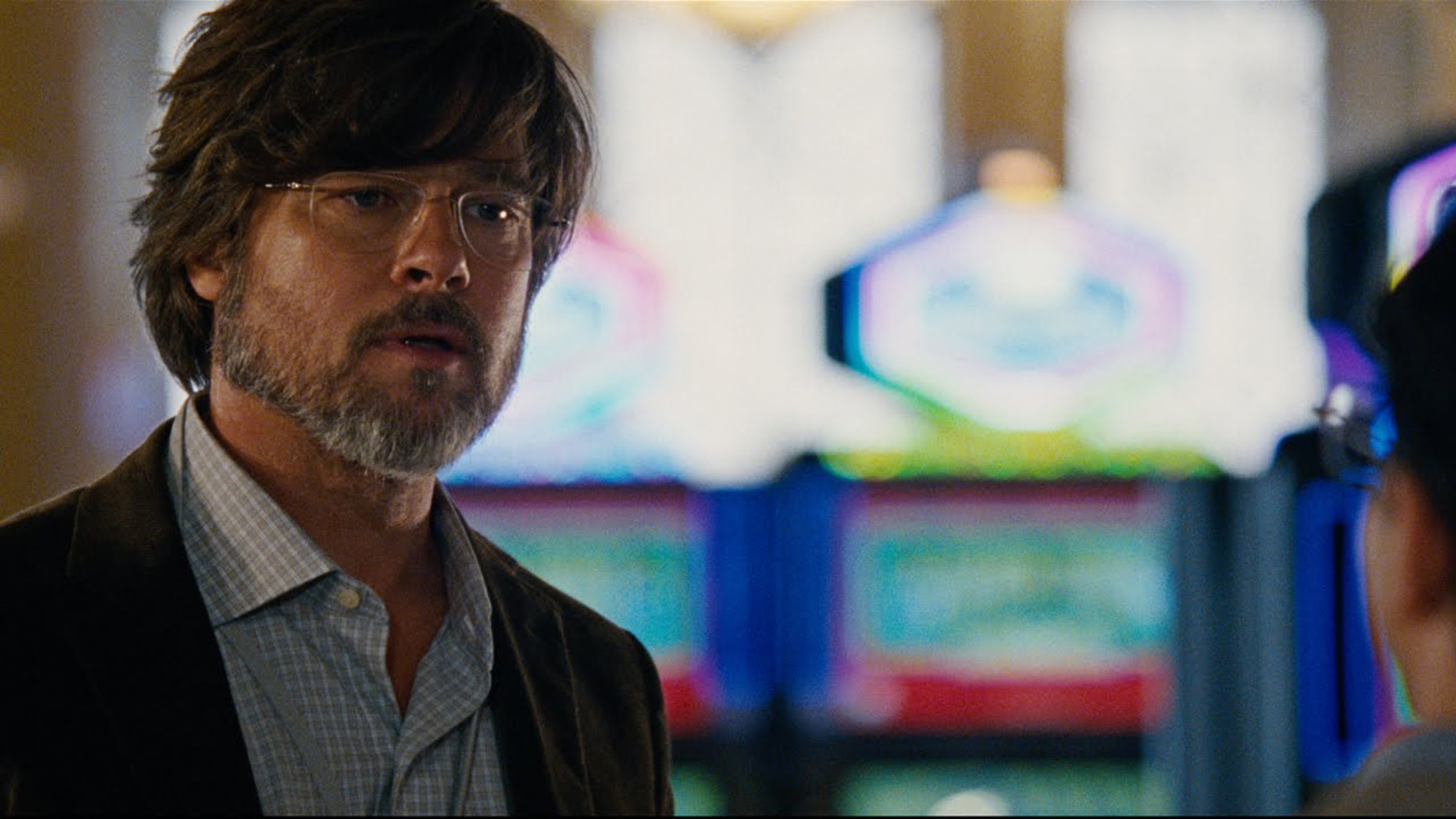 Brad Pitt’s detached air is exquisite, while Christian Bale’s manic metal drummer Doctor is too weird to be true, making it even more remarkable how close to the real guy the portrayal is. A slew of other terrific performances from make the whole thing an ensemble well worth celebrating.

In terms of McKay and Charles Randolf ‘s adaptation of Michael Lewis’ dense but entertaining book, it’s a touchstone of how to adapt such a work to the screen. It’s a truly cinematic script, using various techniques of film (performance, camera work, montage) to tell the story. This sounds like a trite complement, but too often a film of this nature becomes either overly wordy and performative (turning it into a stage play), or overly poetic and abstruse.

There’s a giddiness to the film’s technique that’s buttressed with a deep, dark cynicism, the very same sentiments that drove this select group of investors to bet against the entire world economy. This is a hero’s journey where we’re profiting off the apocalypse, and it’s this appalling paradox that’s so wonderfully captured with the film’s delicate tone.

When films like Social Network come out they feel important, like we’re witnessing contemporary history being solidified in cinematic form. Similarly there are ambitious films like Syriana, impressive works that through a twisting narrative forecast the political and social effects of a near future by passing a lens over our present.

Then there are works like The Big Short, broadly comic and surreal films that will no doubt be dismissed by many. Yet the movie is deserving of much more than a superficial appreciation – this is a deeply sophisticated film that sometimes appears silly, and that’s what makes it all the more excellent. Audiences may show up for the start, or for the visceral thrill of tackling these issues, but hopefully they’ll also get the sense of the true insanity at the core of this entire circumstance.

I’m not sure if one will feel more angered or depressed after the film, but they’ll certainly be more informed. I don’t know if people watched Kubrick’s nuclear war film and felt better or worse about the situation, or simply became cynical about the whole thing. I do know that it made them feel, made them question, all while making them laugh. The same can be said now, as the lessons clearly have not been learned a decade later.

This is blackly comedic, scathingly provocative film of the first order and easily one of the best of the year. Its collision of Wall Street with Vegas couldn’t be more apt, its implausibility underscored by the truth of the events it documents.  It’s an ambitious film while feeling contained, a horror movie with a gritted-teeth smile.

The Big Short is a big, big success.