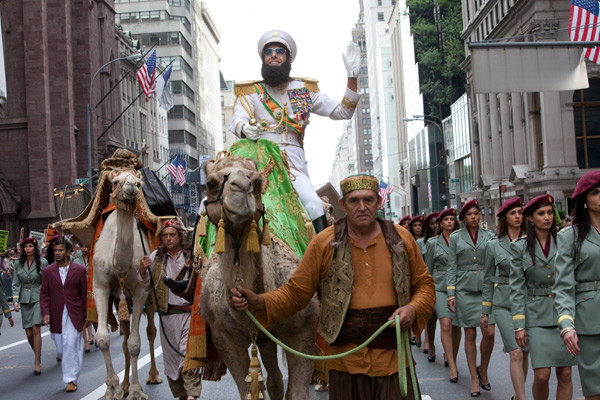 When The Dictator opens with a dedication to Kim Jong-Il, it puts forward a promise of gleeful transgression it never lives up to. The latest from director Larry Charles and star/writer/virtuoso Sacha Baron Cohen is as raunchy as their earlier Borat (2006) and Bruno (2009), but much less relevant and ambitious. The Dictator is simultaneously tasteless and toothless – a provocation in search of a point, taking a potentially explosive premise and reducing it to the level of a mediocre studio comedy.

If surprise is crucial to humour, then I fear that Cohen’s brand of shock-comedy may have an even shorter shelf life than most. Following the mixed-to-hostile reception that greeted Bruno, The Dictator feels like a retreat to the comfort zone. President Aladeen (Cohen) is allegedly the dictator of the fictional North African nation of Wadiya, but his braying voice, his vaguely Middle Eastern ethnicity, and his racism, anti-Semitism, and misogyny (to a pregnant female character: “Will you be having a boy, or an abortion?”) may give you flashbacks of a certain reporter from Kazakhstan. This time, the action is entirely scripted; Cohen can’t really be expected to maintain the Candid Camera schtick as his fame grows, but given that we’ve seen this kind of humor in the high-wire context of Cohen and Charles’ docu-comedies, The Dictator can’t help feeling a little watered-down.

But that wouldn’t matter if the laughs were there. The deeper problem is that Aladeen is the most repellant character Cohen and Charles have yet given us. Ali G, Borat, and Bruno were not good people, but they were more ignorant than cruel. Aladeen is the first Cohen protagonist who is proudly evil, executing staff members for minor infractions and talking about rape as if it were brunch. When Aladeen arrives in New York to speak at the United Nations, revolutionaries kidnap him, switching him with a double to bring civil rights to Wadiya (they disguise Aladeen by shaving his ludicrous beard, and the audience is startled by a rare appearance of Sacha Baron Cohen’s unadorned face). Aladeen is rescued by Zoey (Anna Faris), a vegan/feminist/environmentalist grocery store owner who mistakes him for a freedom fighter, and when Aladeen tours her store, he punctures the PC atmosphere with a torrent of verbal abuse: a black employee is “a sub-Saharan,” a woman with amputated hands is “Captain Hook,” and so on.

The Dictator has a lot of scenes like that, where the laughs curdle and die from the sheer unpleasantness of the material. We’ve come to expect taboo-busting comedy from Cohen and Charles, but this time there is little meaning except to simply pick at taboos. Consider a contrived scene where Aladeen has to deliver a baby on the grocery store floor: the gags are predictably gross (up to and including a POV shot from a body part not known for its POV shots) but also arbitrary, as if Cohen and Charles felt the need to push the envelope and so landed on a scenario that involved a vagina and a newborn. Cohen and Charles sometimes succeed in shocking us, like when Aladeen goes on an extended riff about the time he raped a group of 14-year-old boys, but there is no satirical point to redeem the ugliness of the comedy. All Cohen and Charles tell us is that we’re easily shocked by child rape.

What The Dictator lacks is a reason for its offenses. Borat said that America was little more advanced than the xenophobic Kazakhstani, and the admittedly scattershot Bruno was at least a full-frontal assault on America’s sexual hang-ups. The Dictator only starts to cook in its last ten minutes, when Aladeen delivers a speech about the joys of oppressive dictatorship – a system in which 1% of the country controls the wealth, elections are rigged, one man and his family controls the media, and uses fear to turn the populace against its own best interests. The notion that Wadiya’s dictatorship is as free as America’s democracy is the kind of ballsy idea worthy of Cohen and Charles; had it been the thesis instead of a throwaway gag, The Dictator might not have been a big-budget summer comedy, but it would have been something.

What we’re left with is the niggling question of why Cohen and Charles wanted to make this movie in the first place. In Borat and Bruno, the grossness of their cultural stereotypes was often redeemed by the potency of their satire and the audaciousness of their approach. For most of The Dictator, they’re content to stick with the culture-clash shenanigans. Perhaps a tortured argument could be made that Cohen and Charles are using comic excess to demystify evil, a la Chaplin’s The Great Dictator, but I think this gives them too much credit. I don’t think I’m out of line to be offended by a gag in which a black man’s decapitated head is used for fellatio, and I think Cohen’s Jewishness is becoming an increasingly thin defense for his many jokes about the Holocaust and Holocaust denial. I’m also beginning to grow weary of his caricatured depiction of the Middle East. Cohen and Charles are smart filmmakers, but The Dictator makes a good case for all that recent talk of “hipster racism.”