Fan Expo stormed through Toronto to the tune of an estimated 100,000 people over the weekend, and Dork Shelf was there to take in all the sights, sounds, and cosplay on display. You can check out some of the better costumes over at our Facebook page, but in the meantime, here are a few quick gaming-themed notes from the show floor: 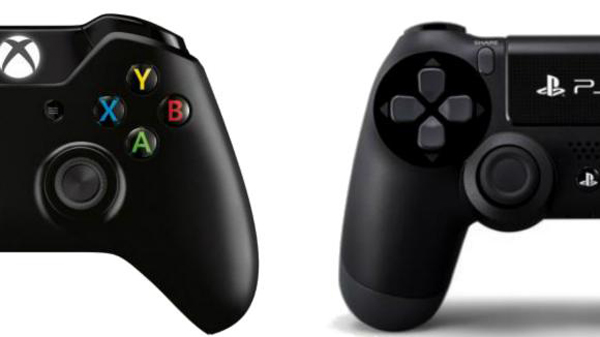 Like most everyone else sporting a free “Keep Calm: The PS4 is Coming” t-shirt (or its equally obnoxious Microsoft counterpart), we managed to get our hands on Sony and Microsoft’s upcoming consoles. It’s too early to say much about the games themselves – though Assassin’s Creed IV: Black Flag appears to be on point – but both machines seem to be perfectly adequate gaming systems.

Then again, that only means that the PS4 and the Xbox One are capable of running next generation games that look and feel like current generation games with incremental improvements. Based on early previews the new consoles represent a continuation of the previous generation rather than a break with the norm, so don’t expect to notice a huge difference with regards to gameplay.

The PS4 controller otherwise feels completely familiar, while the Xbox One controller feels a bit more like a PS3 controller, insofar as it’s smaller, sleeker, and a touch more symmetrical than its predecessor. I’d say that’s an improvement, but your opinion may vary depending on what you’re used to.

Now here’s hoping that the ‘Keep Calm’ meme dies with the current generation.

The cast of Splinter Cell: Blacklist turned out to promote Ubisoft Toronto’s first major triple-A release, and the lively actors were brimming with anecdotes during their panel Q&A on Saturday.

For instance, we learned that Ubisoft’s new motion-capture head tracking cameras are screwed onto the actor’s skulls, to the point that Kate Drummond (Anna Grimsdottir) literally bled for the project when one of the clamps pierced the skin of her temple. The heavy apparatus made for long eight-hour days, made worse because Eric Johnson (Sam Fisher) is apparently the kind of insufferable go-getter who never complains about work even when the wardrobe is permanently altering his cranium.

Not only is Johnson more stoic than the character he portrays, he also may have been predestined for the role. Michael Ironside (the former Mr. Fisher) mentored Johnson on several film sets back when Johnson was a teenager breaking into the industry, and the working relationship continued when Ironside met with Johnson to provide tips and formally cede the role of Sam. Given the usual backlash that occurs whenever an unproven successor takes over an iconic role (ask Ben Affleck), it helps to have a veteran guide to oversee the successful transition.

Keep your eyes peeled for more on Splinter Cell: Blacklist in our upcoming interview with Kate Drummond.

The droids you’re looking for

Nerd Noise Night infiltrated a sold out Horseshoe Tavern on Saturday, offering performances from six nerd-approved musical artists over the course of a rollicking five-hour concert. Highlights included Dork Shelf  pals Nerds with Guitars and More or Les, who debuted three songs from his upcoming Doctor Who–themed rap album, and Brental Floss, who added his own lyrics to video game theme songs while accompanied by a marionette of himself.

(The puppet was a gift from a fan, in case you were wondering.)

EP Daily’s Shaun Hatton organized the eclectic show, and also headlined as a member of The Cybertronic Spree. The group played select songs from the 1986 Transformers soundtrack while dressed as said Transformers, with special guest appearances from Unicron and Weird Al circa Dare to be Stupid.

The costumes alone were worth the price of admission, ensuring that the annual event will remain one of high points of Fan Expo even for those who lack the requisite 80s nostalgia.

Let us count the ways

The #1reasonwhy conversation grew beyond Twitter during a Sunday panel that featured a collection of local game developers and personalities. Unlike the Blacklist panel, the #1reasonwhy panel was a bit short on specifics – understandable, given the charged and frequently personal nature of the subject matter – but attendees were nonetheless given plenty to think about as the speakers dissected the sexism and misogyny that still pervades the gaming industry.

So why are there so few female game creators?

Perhaps it’s because female designers are stereotypically asked to make games with dresses regardless of the content of their portfolios. Or maybe it’s because daughters are – by default – damsels and/or collectible MacGuffins rather than playable protagonists. One panelist indicated that she was more likely to get hired if potential employers had never seen her photo, while another was explicitly told that audiences would never tolerate a video game about a single mother.

So yes, sexism is still a problem, especially considering that the women on the panel disprove the pernicious and persistent notion that women lack the technical qualifications to become developers.

Fortunately, the fact that the panel happened at all indicates that conventions like Fan Expo – and geek culture more generally – are becoming more inclusive spaces, a trend that will hopefully continue along with the discussion. As panel guests learned, when sexist statements go unchallenged, those making the statements assume that silence implies agreement. #1reasonwhy served as an opportunity to counteract the established norms that have historically relegated women to the background.

And if you’re one of the white men unknowingly enjoying the benefits of the system? The best thing you can do is to shut up and listen. You aren’t aware of everything that happens beneath the surface, so take the time to educate yourself before you say something you might regret.

That’s it for now. There’s more at Fan Expo than we could possibly cover, so let us know what we missed and we’ll add it to the list for 2014.