If you’re unfamiliar with the source material of The Giver, you’ll be hopelessly lost with regard to this long awaited big screen adaptation. If you have an intimate knowledge of Lois Lowry’s now almost seminal early 90s young adult novel bestseller, you’ll probably still be confused because most of it doesn’t work on film without the author explaining exactly what’s going on. Bearing a lot of dramatic and stylistic ambitions, The Giver quite awkwardly becomes the YA equivalent of Lynch’s failed adaptation of Dune or Tom Tykwer and the Wachowski’s mounting of Cloud Atlas. It’s the cinematic adaptation of a novel that probably can’t be filmed, and in a crowded marketplace for tween and teen fictional adaptations, at least this one’s missing of the mark signals something refreshing. It’s certainly daring in some respects despite never accomplishing much of anything.

In a post apocalyptic world of equality where everything is literally black and white, emotions are inhibited by way of medication, unnatural selection, and strict governing laws from a council of elders, a young man named Jonas (Oculus star Brenton Thwaites) has come of age and been assigned a high profile profession upon graduating from school. He becomes the keeper and guarder of memories of the past; memories that no one else but the keeper is allowed to have. Jonas learns his new trade from the last, somewhat disgraced keeper (Jeff Bridges) via a transmission process. Now allowed by profession to lie, break rules, and not conform to manners of civility, Jonas begins to realize everything that’s missing in his supposed utopian society and he becomes increasingly determined to change things when those he love turn out to be in danger.

Both slavishly faithful to many faults and somewhat distant from the intended point of the book, the script and the direction from Australian Phillip Noyce (Patriot Games, Salt, The Bone Collector) are never on the same page. Moreso than the plot, the tone is confusing enough. It bounces around wildly between a Hunger Games styled cash-in and a serious art film determined to make a point about modern political complacency.  The result of this constant division results in a film that doesn’t feel like the same film from scene to scene. 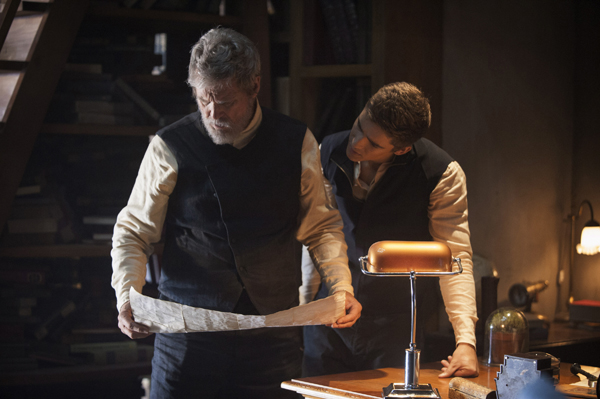 There’s a lot of ground to cover in Lowry’s book, and most of it ends up on screen with a few obvious and subtle exceptions. It does everything in 97 minutes (it wasn’t a very long book), but if there was ever something that cried out for cinematic explanation it’s the world these characters inhabit. How does no one remember everything? How are all of these memories of the history of humanity even formed? What world is this? Is it ours? What is the boundary that no one has ever crossed that will suddenly free the memories? How long as this world existed? Why is the chief elder (Meryl Streep) seemingly younger than the rest of her council? Some of these are nit picking questions, but some offer serious flaws to the actual storytelling behind a film. Films don’t always require explanation, but when you pick and choose what you care to explain, it makes the final product a jumbled mess.

Granted, to some degree not everything even gets explained in Lowry’s novel, either, but she was a writer of great prose where people can get lost in the words at the own pace and come up with their own visual conclusions. Here, that sense of imagination largely gets taken away by the decision to over-explain some elements that will have bearing on the plot later (especially with regard to the medication of the people in the community and Jonas’ relationship to a baby that hasn’t had a family assigned to him yet, and, oh yeah, by the way I forgot the mention that whole “assigning of a family” thing) while casually glossing over anything that does not keep the already somewhat obtuse plotting on track. It’s frustrating because there’s a negatively interesting film buried in here that’s trying desperately to get out to no avail. It’s a film that tells audiences what they should be paying attention to without giving anyone who isn’t already familiar with the story much of a reason to care.

A perfect example of this would be Jonas’ parents, played by Katie Holmes in full on dowding, zombie mode and Alexander Skarsgård. Holmes never gets to show anything, but that lack of fire is the only thing that establishes her as a big chief of justice in the film because her character is so quickly explained that you’ll miss it if you aren’t paying attention. Meanwhile, we know what Skarsgård does for a living, and he flirts with showing emotional honesty, but then the film just up and decides to negate any of that when it shows what his job truly entails. And furthermore, how again do these people not show emotion? Even their “preciseness of language” doctrine that seemingly outlaws the use of certain words and phrases still shows an emotional choice. Making sense of any of this in hindsight feels a bit like tilting at windmills.

Similarly, Noyce’s direction feels as uncontrolled as the script. The film start for a lengthy period in black and white, which might just be a stylistic choice until it turns out the world actually IS black and white a al Pleasantville. Again, no explanation, but even though Jonas can now see the world in Technicolor, the film can’t consistently go between sequences that don’t involve him. Have we been allowed to see the colour as an audience? If so, why are some random sequences in his absence black and white and others in colour? Laziness? Reshoots? The tangible questions of this film’s production are more thoughtful and intriguing to think about than the narrative questions. Also curious is how the film can go back and forth between being stunning to look at and impeccably production designed in certain moments to looking suspiciously like a production that was so cheap they could only afford four sets. Even the cinematography – black and white or colour – can’t sustain any semblance of equality.

At least Thwaites seems to have a handle on his characters arc despite Jonas being purposefully bland and very slowly awakening throughout. More interesting is the arc that his soon-to-be-crush and former schoolmate Fiona has, with Odeya Rush making the most out of what could have been a very thankless role. The film still saves the best dramatic roles for the adults, however, with Streep approaching a rare supporting performance for her with a sense of shit-eating glee to be playing a villain, and Bridges wonderfully giving a restrained, gravelly performance as a man keeping far too many secrets of his own to keep harbouring everyone else’s. The scenes where Streep and Bridges get a chance to verbally spar with one another are easily the film’s highest points.

Maybe The Giver just couldn’t be made into a film, and while I’m sure some fans and non-fans alike can appreciate the attempt made here, the results aren’t pretty to behold in terms of storytelling or technical acumen. And if you can’t settle on getting one or the other right, there isn’t much of a reason to make the movie in the first place. Some things just work better on the page and in the imagination of the reader, and while I fully expect someone to claim this as a misbegotten masterwork in the future, it certainly isn’t a good movie.