“The Best with the Best to Get the Best” is all about confession. An act, which either in the spectre of religiosity, or that of a personal purge, has an undeniable power. For the characters of The Knick, some decide to partake in the practice producing varying consequences, and some decide to stay tight-lipped about their myriad of sins.

Thackery’s fallen off the wagon (or boat). Hard. Following the advice of his new prostitute du jour he mixes heroin and cocaine, which he cooks into a powder ready for the snort. No more injection sites for Lucy to find no matter how closely she looks for the secret injection spots in his nether regions.

Although, it doesn’t seem like Nurse Elkins will be looking at anyone’s throbbing dick veins any time soon, no matter how hard the rakish Robertson Jr. pursues her. She wants to know if he’s a man of God and gives him the cold shoulder when he hesitates. With her preacher father in town, Lucy opts to bask in the power of forgiveness, rather than the pleasures of the flesh. Totally convinced by her dad’s instruction that public confession is the only road to salvation, she tells all (affair with Thackery, theft, drug use) to the ad hoc congregation. After the service, her father counts the coins given to him by his flock; a good night given that, “people give more when they feel worse.” It’s obvious that despite his speaking in tongues and screaming about Jesus he doesn’t believe his little “cricket” is on the road to salvation. He beats her with a belt for her wicked ways.

He’s not the only daddy who’s angry in the episode. After a hard day of swindling even more money out of the hospital by making unnecessary changes to the construction of the new site, Herman Barrow heads to the brothel. He’s pissed because his favourite very young lady of the night Junia had been, ahem, indisposed most of the evening. Once he gets his hands on her, she apologizes claiming that all she dreams about is a life with him. Seriously, this guy needs another punch to the dick if he actually buys her seasoned line the she was busy with “school studies” and “doing her hair just right” for him.

The Power of Prayer

Not everyone is as happy about their hairdos like Barrow’s coquettish ego booster.

Gallinger’s Frankenwife has a new set of teeth and Everett’s all like, “Okay you’re fixed.” But her sister Dorothy isn’t convinced, claiming that she’s praying for her sister. He wants to take her to a party but she’s still obviously insane and worried that one of her cadaver teeth implants will fall out during dinner. He’s forced to go stag, facing his braggart schoolmates and their snarky wives.

When he overhears two men talking about eugenics, specifically about how “negroes” are the worst of the worst, his ears perk up and he’s all like, “You hate black people. I hate black people too!” Specifically Algernon, who has replaced him as teacher’s pet at The Knick. It looks like this is a perfect storm for the racist and denial ridden Dr. Gallinger to head straight into the arms of a medical and social movement that’s ultimately responsible for a multi-decade run of forced sterilization and mass genocide. 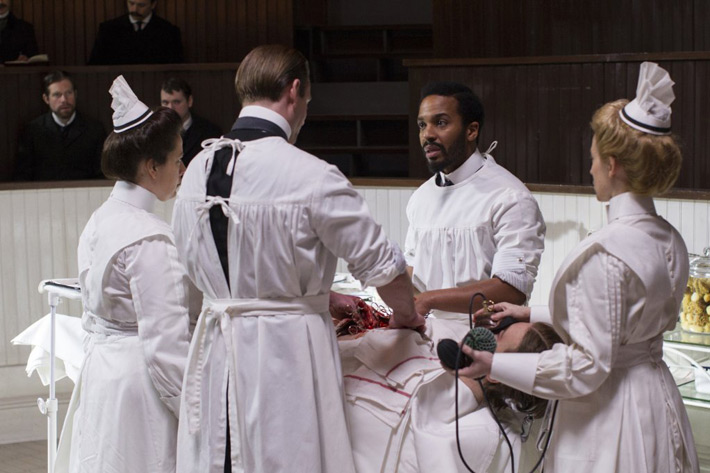 Sister Harriet’s faces discrimination during the first hearing in her abortion trial. Despite her lawyer’s attempt to present sixteen almost identical cases where the police entrapment she was the victim of is ultimately unlawful, the well, very judgmental judge is having none of it. He quotes scripture to illustrate just how evil she is. He claims, “real Americans” (aka not Irish Catholic immigrants) know what she is. “

It seems that Cornelia’s money for the fancy lawyer may not be enough to save the persecuted nun. It seems that there may not be any money at all. After having “nice” sex with her new hubby—literally hours after making out with Algernon and leaving him a DTF? note on his desk — Cornelia’s spouse lets her know what’s what when it comes to helping a “baby killer.” He won’t be opening his purse strings to the likes of that and asks Cornelia if she knew about what Harriet was doing and then, “How can someone who wants to have a baby sympathize with a person like that?” This could be the chance for Cornelia to confess that she herself received an abortion, but she’s smarter than that and gives a kind of, “Okay, sure sweetie” stare up to the ceiling.

Of Mice and Men

Bertie (as he’s now to be called only on his off hours) starts his new position as Third Surgeon at Mount Sinai Hospital. A fish out of water, in his introduction he makes it known that he’s the only gentile in the room with a subtle, “I am not a Jew.” He’s annexed to the laboratory to prove his worth, and begins research on a new extract they’re calling adrenaline, and his task is to find out if there are any practical uses (hot tip from the future: the answer is yes). But it’s not the (eventual) drug that’s got his heart rate going. He meets Genevieve Everage a shoot-from-the-hip journalist who flirts, teases, and asks him out on a date.

Bertie takes her to his beloved Huber’s Palace Museum where among the freak sideshows and oddities Genevieve confesses she’s not what she seems. She reveals her true identity as Esther Cohen, the daughter of a shirt maker. She muses about the power her pen name gives her, that Genevieve could be anyone and lives in a shroud of mystery.

Bertie’s totally entranced, and immediately intimidated, telling his coworker he fears he might not be a match for her (read: he’s a virgin). They begin testing mice to see if adrenaline works to cure the sniffles (a most medical term). Bertie wants to start testing on larger mammals, but he’s told his new boss Dr. Zinberg is fastidious about his research protocols. It’s a far cry from The Knick with Thackery’s loosey goosey human experimentation.

Speaking of which, Thack’s gonna cure syphilis with typhoid fever. Well, I mean he’s got other projects, he’s also going to go rooting around the dead body of a recently deceased cocaine addict. A syphilitic sow is the one and only test subject for his theory that high fever equals no more cupid’s disease. No time for silly protocols on tiny rodents, he’s got his ex lover to save!

“If people knew what you did in here, they wouldn’t trust you to give them a fucking aspirin.” – Tom Cleary

Algernon takes part in the extreme experiment, although he might be somewhat distracted given that his wife is in town. Oh, did he not mention he had a wife? Well, her name is Opal and she’s in New York after tracking him from all the way across the pond. Opal shows up at his parent’s place and he’s forced to come clean. He’s all like, “We got married and it was fun but then… Meh.”

Some skeletons were able to stay in the closet in this episode, but others it seems came screaming out, spurring more questions than answers.

On The Operating Floor

Keeping It Cool – I love how cool Algernon’s parents are when they’re talking to Opal in the kitchen. They’re all like, “Yeah, he talks about you all the time” and the moment she leaves they’re like, “What the fuck Algie?”

Bertie Goes To The Brothel – After admitting his “lack of experience” Bertram’s new coworker suggests that he might use the services of a prostitute to give him some practice. Aw, Bertie, he’s like everyone’s kid brother and it’s undoubtedly going to be adorable and awkward if he decides to search out the services of a sex worker. Hopefully, he doesn’t get venereal disease because that’s something that would, like,  totally happen to him.

This Little Piggy – We weren’t exposed to any gruesome procedures this episode, but rather the most graphic scene is when Algernon pulls an eight inch thermometer out of a pig’s anus.

Speight Gate – What’s the deal with the Speight death and the whole there’s no corpse in the coffin thing? The episode touched on it for like two seconds, but Algie and Cornelia were too distracted by the other’s mouth to talk about it any further. It’s a mystery to be solved for sure, and I think it’s (annoyingly) going to take all season before we see its conclusion.