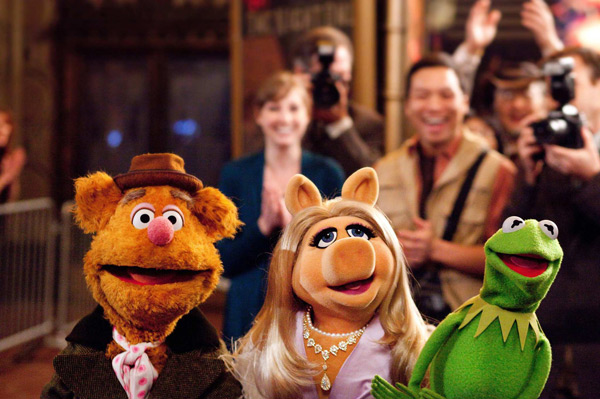 While it’s as funny as one would hope a Muppet film would be, the rebooting of this finely-felted gang of friends, courtesy of Disney and star and co-writer Jason Segel, does have a few fairly big problems. Structurally the film is a bit wonky and the script feels like the result of many different people having a lot of different feelings about the tone of the film. To call a film like The Muppets out on such seemingly trivial issues might sound like the groanings of Statler and Waldorf, but despite any such complaints The Muppets are undoubtedly back at the top of their game comedically.

Brothers Gary (Segel) and Walter (inexplicably a Muppet in the same way that Fozzie and Kermit were related in The Great Muppet Caper) have grown up idolizing The Muppets, particularly Walter who always dreamed of being a part of the great comedic team alongside Kermit, Fozzie, and Gonzo. When Gary decides to take his long time girlfriend Mary (Amy Adams) on a trip to California, they allow Walter to tag along to live out his dream of touring the famed Muppet Theatre in person.

Walter’s dreams quickly fade when the group realizes that the theatre is abandoned and that the Muppets have disbanded. To make matters worse, Walter stumbles onto a plot by wealthy oil baron Tex Richman (Chris Cooper) to take over the theatre and drill for oil beneath it. If the Muppets can’t raise ten million dollars to not only buy out the lease on the theatre, but also keep the right to call themselves Muppets, they will lose everything they worked so hard to attain. Walter tracks down Kermit and together they get the gang back together again to put on a telethon in the style of their old variety show to raise the necessary funds while constantly being told that the famed comedians, stunt men, and whatevers, are no longer relevant to today’s youth.

The script courtesy of Segel and his Forgetting Sarah Marshall co-writer Nicholas Stoller wisely keeps the good nature of the Muppets intact, and the jokes themselves are as funny as the best films in the Muppet canon. While a lot of these jokes are aimed squarely at the older more nostalgic crowd, rather than trying to court younger viewers who might sustain the franchise a bit longer, they are never forced or obvious. Some of the pop culture references might cause Muppet purists to roll their eyes for a brief moment, but they’re really just a loving nod to what the comedy troupe has been doing since their last big and small screen outings.

The strength of this film comes in sequences where the audience gets to see just what The Muppets had been doing since they split up since only a small handful of them have gone on to be successful. Piggy has taken a job as a plus-sized fashion editor. Fozzie has been fronting a horrid Reno based nightclub Muppet cover band known as The Moopets. Gonzo has done surprisingly well for himself as a rich plumbing magnate. Rowlf was quite literally doing nothing, while Scooter was en route to a TED talk before being brought back into the fold. Some characters do tend to be overlooked (especially Rizzo, who has absolutely no lines, and Pepe who has one pretty great scene), but this film seems to be about the quality of gags over quantity, which is something the Muppets recent string of YouTube videos seemed to forget about.

Segel, Adams, and Cooper are all delightful as the leading humans, as are the actors turning in cameos (which is somewhat surprisingly small in comparison to past Muppet films), but no matter how good they are, they seem to contribute to one of the bigger problems at the heart of the film: the script seems to have been written by Segel to downplay his and Adams’ roles, but somewhere along the line it’s almost as if the studio decided that the Muppets couldn’t sustain their own film and pointlessly beefed up the roles of the humans. Not helping their cause is the fact that the humans have more songs in the film than the Muppets do, to the point where it feels like Muppets are awkwardly placed into songs that were obviously written for human characters.

The songs themselves are another problem and another reason why it feels like there were too many cooks in the kitchen on this one. The songs, written predominantly by Bret McKenzie, one half of Flight of the Conchords, are not bad songs. They’re all very catchy and well arranged, but most of them don’t feel like songs from a Muppet film. Many of them honestly feel like Conchords songs. If one substituted Bret or Jermaine for anyone actually singing them, human or otherwise, they would be virtually indistinguishable. Conchords’ main director James Bobin also directs this film, leading to even further tonal comparisons. Only the opening number “Sing a Happy Song” (which still has an oddly Dr. Horrible style feel to it) and Kermit’s ballad “Pictures in My Head” feel like classic Muppet songs.

The film almost comes wildly off the rails towards the end in terms of plotting and pacing, but the sentiment and humour that audiences have come to expect from the Muppets is still there in spades. No matter what complaints are voiced in this review, audiences will more likely than not laugh themselves silly and praise the fact that they finally have the big screen Muppet experience that hasn’t been seen in close to twenty years. It’s still side-splittingly funny, but in a canon that includes numerous classic and nearly flawless films, let’s just hope the next outing has a bit more consistency. These guys still have it in them to do great things, but this feels more like a test run for future greatness.

Side note: The film also opens with a Toy Story short that’s almost worth the price of admission itself, as Buzz Lightyear gets locked in a medieval-themed fast food joint and is drawn into a support group for discarded kid’s meal toys. It’s equal parts touching and laugh out loud hilarious and well worth showing up on time for.