If you want to go see a laugh-out-loud movie this weekend with some very nsfw humour, then definitely go see The Overnight. The film is written and directed by newcomer Patrick Brice under the guidance of the busybody Duplass brothers as producers. Adam Scott and Taylor Schilling play a couple who have just moved to L.A. and are looking to make new friends. When their son hits it off with another kid in the playground, a playdate is set up that ends up being much more for the adults than the children. Pretty soon it becomes clear that Kurt (Jason Schwartzman) and Charlotte (Judith Godrèche) are willing to share a lot more than pizza with their guests.

We got a chance to talk to Adam Scott about how the script came to him, working with Jason Schwartzman, and donning a goatee and fake schlong for the role.

How did you become involved in The Overnight?

Mark Duplass sent my wife, Naomi, and I the script about two years ago. We’d been looking for a movie to do, we’d just formed a company (Gettin’ Rad Productions) and we’d only done TV so far. It fit all the criteria. It was really small, but more importantly it was really good. It was really funny, we related to a lot of the stuff in the script. It seemed like it could be doable. Essentially one location.

I was a little freaked out by the script. The sexual stuff but also the character of Kurt (Schwartzman) kind of freaked me out. It was the kind of guy that, in life, creeps me out a little. Overly friendly, a lot of compliments, a lot of touching when he talks to you. All that kind of stuff. On the page it freaked me out a little bit but then getting Jason Schwartzman to play him, he ends up being an incredibly charming, seductive guy.

Can we talk about the prosthetics you guys wear in the movie?

Every movie has that scene that you’re freaked out about the whole shoot. You’re like “god damn it, that fucking scene’s coming up” and everyone’s nervous. Then the day came and we put the things on and did it and were so surprised by how comfortable we actually ended up being because it’s not actually you. It looks like a real thing because it looks like a penis, but it’s not yours, so everyone’s seeing approximately what you look like naked, but you’re not naked. It just felt like I had a very interesting pair of shorts on. Jason and I were both pretty relaxed, just sauntering around in these things, and it looked like a couple of naked dudes walking around but we technically weren’t. We actually had a pleasant night in the pool playing with our fake dicks. Jason’s became engorged with water, we had to squeeze it out.

If you were at a similar dinner party, at which point would you bow out?

It’s tricky because Jason is a really charming person and Jason is a really good person. I think it emanates from him, you can tell he’s a good person. I didn’t really know him well before we worked on this movie, but I felt like I kind of did and knew he was a good person already just from watching him over the years and it’s true. So him playing the role makes it so much more interesting and tricky. I don’t know when I would leave because he’s a very persuasive person playing this part. Probably at the point where he says “we’ve got a seriously delicious situation going on over here”, which is like the first scene in the kitchen, that was always one of my favourite lines in the script. I don’t know if I would have put the kid down at their house, I probably would have figured a way to get out of there with the kids, but at the same time, our characters really want to know some new people and they want friends and this place is making them feel good so they didn’t have a reason to leave.

How do you think Ben and Leslie (Adam and Amy Poehler’s characters from Parks and Recreation) would handle something like this?

I think Ben and Leslie had a really healthy sex life. We always thought that Ben and Leslie just went for it. So I think they would have been down to clown. 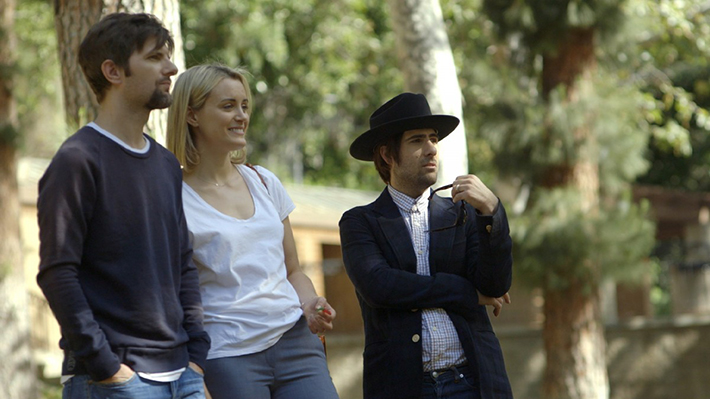 You can see there’s some improv and riffing happening here, do you have a favourite bit that made it in?

My favourite bit of improvisation is toward the end of the movie. I said something about The Beach, the Leonardo DiCaprio movie, I just threw it out there during the scene not necessarily thinking that this is something that will be in the movie. We were just screwing around but then Jason comes back with thing about this is where he got the idea for the fucking water filter company, which is so absurd and stupid but so brilliant. That’s how good he is at improvising, that he brings it back to the character.

It’s not addressed until the end of the movie, but I thought the goatee was as good choice for your character, kind of the least L.A. thing he can have.

Yeah, I had a beard and then when we were about to shoot I shaved all but the goatee and sent the photo to Patrick and he was like “Yes.” Those were all my clothes that I found and put that bummer of an outfit together. Everybody brought their own clothes. We went out and got Jason that blowsy white shirt that he wears, it’s a very specific thing that he wanted and I think it works perfectly.

Did anyone keep any of Kurt’s butthole paintings?

My wife and I have one in our office. Jason and I were on The View the other day and Whoopi Goldberg asked for one. I think one went up for auction somewhere. Our production designer Theresa Guleserian painted all of those in one night. We had someone that was going to do it and they totally flaked so she had to do it in one night, she didn’t go to sleep and just painted all of them. She did an incredible job.

Is there still any chance of a Party Down movie?

Personally I think movies of TV shows rarely work. This is a 22-25 minute show and it was perfect idea: one party per episode. That’s a great little package, every episode is a perfect structure. Then you mess with that and have to spread it out over 90 minutes and a three act structure… I don’t know, I just think it’s messing with a perfect idea. I guess the thing to do would be to make six episodes but I don’t know if that will ever happen, it would be fun.