The Purge: Anarchy Review - That Shelf Skip to main content 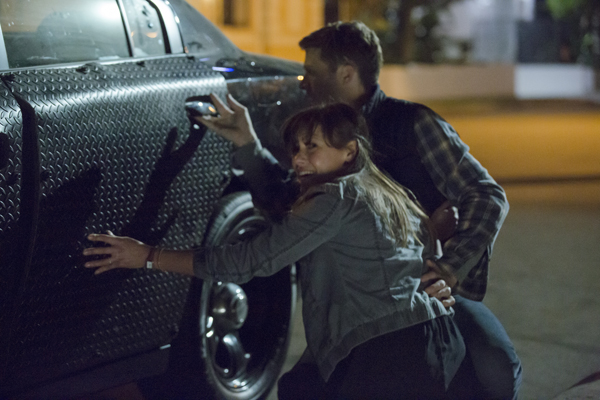 As with the first Purge film, the best thing this follow-up has going for it is a neat, easy-to-sell concept: in the near future, a new government lowers crime and poverty significantly by enacting an annual purge, where all crime is legal for one night. This is the kind of thing studios and marketers love. An idea that’s easily pitched and contains lots of violence and sequel juice. Despite mostly negative reviews for the first film, audiences saw it in droves.  Let’s hope most of them learned their lesson.

Anarchy moves beyond the suburban home invasion of the first film and puts a cast of all new characters in the middle of downtown Los Angeles. Frank Grillo plays Leo, a man who arms himself with enough artillery to rescue Morpheus from the Matrix before heading into the night. Despite having mysterious motives for braving the purge, he becomes the protector of a whiny couple whose car broke down just before nightfall (Zach Gilford and Kiele Sanchez), as well as a mother and daughter who were forced out of the safety of their apartment by a SWAT team for reasons unknown. While the performances are satisfactory for the most part, the characters and story are secondary to the premise and action. Even Michael K. Williams’ brief appearance is hammy and can’t elevate the film above schlock.

Despite opening the world up to a major metropolis and getting into ulterior government motivations for the purge, Anarchy fails to fix many other problems present in its predecessor. The largest one of all being that people only seem interested in committing two crimes during this yearly purge: murder and attempted murder. Occasionally characters are doing this for revenge, but more often it is for sport or to “cleanse the beast.” The rich in particular take great pleasure in killing, especially when their victims are poor. It’s supposed to be a comment on American gun culture and how the poor are treated, but it really just suggests that most people are all constantly suppressing the urge to kill simply for fear of incarceration, which is preposterous… right?

Where are all the drug traffickers and looters? One could argue this is less interesting than all the murder and therefore we can assume it’s happening offscreen, but there are several instances where committing another crime would have been quite useful to the characters. For example, when Leo needs a car to attend to some personal purging, he begrudgingly agrees to protect the others because they claim to have access to a ride, yet he could have easily used his guns and alpha maleness to acquire one by means that would be illegal the other 364 nights a year.

Another issue that carries over from the first film into this one is the need the purgers feel to conceal their identity. Why bother when there can be no repercussions to their actions and their victims seem to be chosen at random anyway? This is clearly just an excuse to have them wear creepy masks, another idea that proved very effective in the first film’s marketing.

The concept itself is not a bad one and remains fertile for more sequels. The first film made enough money to pay for about two dozen more, and with this one coming only a year later, you can count on another annual purge in 2015. It’s the Blumhouse Productions way (see Paranormal Activity 1 though 5). Perhaps in the hands of a more creative screenwriter (James DeMonaco wrote and directed both films), we will see the full potential of this premise take shape in future films.

If you want to see how people really act when there are no consequences for their crimes, just watch your buddy play Grand Theft Auto for a couple hours. Come to think of it, The Purge franchise would actually work quite well as a video game series. All the predictably predictable Anarchy boils down to is a shoot ‘em up game with cut scenes tying together a loose story, which is fine if all you want is some mindless action in a world where 90% of the people are psychopaths.