The Rep Readies for Release - That Shelf Skip to main content 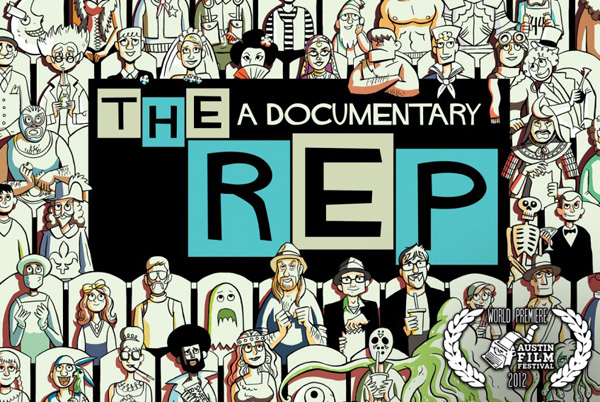 Last year on Sunday, September 16th the Toronto Underground Cinema held its final performances following an array of financial and legal problems that led to it shuttering for good after a screening of The Last Waltz. The cinema had a mandate of showing films predominantly on 35mm and skewing more towards older, nostalgic, repertory fare. It was an idea that was sadly too poorly executed and woefully underfunded to really succeed, and I should know because I was there for quite a lot of it, writing the theatre’s in-house blog.

The good and bad of it all was captured by documentarian Morgan White for a briefly lived webseries and ultimately for a feature film, both of which went by the name of The Rep. With production of the film having wrapped well before the theatre shut down (during the editing and scoring process), the film never really had its end until the theatre itself ultimately did.

The feature debuted last fall at last year’s Austin Film Festival to a great response, but a film about a dying moviegoing experience wasn’t finding too much love from theatrical distributors  despite interviews with eye catching names like John Waters, Bruce McDonald, Kevin Smith, and countless other luminaries that are either a part of or who were greatly influenced by the small, often single screen theatres that skewed towards the classics and strayed from modern day blockbuster fare.

That’s all set to change as White sets to distribute the film using a method best designed to get the film out to audiences that will appreciate it the most: he’s just giving it away. Theatres that want to book the film will get to do so, and they will keep 100% of what the film makes in a move nearly unheard of in the notoriously stingy film industry. The hope is that people who love this kind of fare will be able to start a grassroots movement to bring the film to their city. (A release at the Winnipeg Cinematheque has already been booked for April, effectively making for the film’s public Canadian debut).

With such an announcement, I caught up with White to ask him a few questions about this new endeavour.

Dork Shelf: In the year or so since you wrapped production on The Rep – which was technically before the Underground even closed – what was your time promoting the movie like?

Morgan White: It’s been almost a year now since I put the flick to tape (May 11th, 2012 to be exact), and to be completely honest, it’s been tough to get it out there. It had it’s world premiere at The Austin Film Festival back in October of 2012, and that was a very wonderful experience, but since then it’s been sitting. I’ve gotten a lot of great comments from festivals who like the film, but they ultimately couldn’t find a place for it in their program. That was always tough to hear, but it comes with the territory, and I always knew I’d have to deal with that form of rejection to some extent. I had some small interest from distributors, but those fell through for one reason or another, and now I’m left with a movie to show, but nowhere to show it. It could be that I’m the one who’s not pushing the flick enough, as I’ve never considered myself a promoter by any stretch, but in the end that questions remains unanswered.

DS: How did you ultimately come to this idea of just letting the movie out there for theatres to have it for free?

MW: The idea of giving the movie to theatres, allowing them to keep all of the proceeds, was something I’ve been toying with in my mind for a while. The flick, at it’s core, is about the preservation of the theatres I want it to screen at, and so it always felt a little strange for me to contact a theatre and say “Hey, I’ve got this movie you might find interesting.” and then taking anything from the potential box office. What I want is for theatres to play the film, and get the message out. To me that’s what’s most important. Rep and independent cinema is a subject that I care deeply about, and the preservation of the theatrical experience is something I hold very close to my heart. That’s why I want any theatre that screens the film to keep 100% of the proceeds and put that money back in to their business. Maybe they could use the money to program a film they wouldn’t have been able to get otherwise, or put it towards upgrades. Essentially, what ever they see fit to do with the money is A-OK with me. In making the movie I saw how hard it could be sometimes for these theatres, and I want to give back any way I can.

DS: How do you think the concept of rep cinema has changed since you made this film, both in a personal sense (how you think of it now after being so close to it all) and in a more global sense through travelling to all these places?

MW: Repertory and independent cinemas on the whole haven’t changed much since I made the film, aside from the obvious strain of digital upgrades many are being forced in to, though that was always on the horizon. Their struggles are the same, and will always be, or so I suspect. Some theatres have managed to make a name for themselves, and will probably weather the storm, but I think for some it’ll become harder and harder. I think it’s a topic that many film fans are aware of, and I’d get emails from people saying they wish they had a cinema in their town they could go to, but I don’t think it’s considered big news if a cinema closes. I think it should be. As far as my views, they still matter as much as they did when I was making the film, and certainly before. When I came to live in Toronto for college I found a great deal of comfort in the many rep cinemas that the city has, and that moment will always play a big part in my evolution as a film fan and as a person.

DS: You obviously grew very close to your subjects as most documentarians do, so what do you miss the most now that this chapter in your life is over?

MW: I did grow very close to the boys at The Underground. They went through a lot during its existence, and I was there for all of it, so I couldn’t help but be drawn into their plight, and to them as people. Alex, Charlie, and Nigel are three people I can say legitimately changed my life, and I can’t thank them enough for that. I can recall a moment when I was interviewing Alex about something, and he said “You know, I feel like I’ve known you all my life.” That’s what being a part of it felt like. The Underground changed me, and I miss it very much. Through it I was allowed to create this film, something that I had always wanted to do, and from it I learned a great deal. I miss being there, and I miss hanging out with my friends.

DS: You still put a lot of money and effort into making this movie, labour of love or not, so aside from a sense of altruism and nostalgia, what do you hope to get out of this?

MW: From conception to this moment it’s been over 3 years of my life working on The Rep. I’ve put a lot of time, and indeed a lot of money in to it, but none of that matters to me in the slightest. I really want to get the idea of how important it is for these theatres to exist out there. Lots of people know that they are there, and they go from time to time, but they ultimately forget that there is someone who has devoted their life in the pursuit of sharing these movies with cinema goers, these collective experiences. The message of the film is the importance of their preservation, giving the viewers an inside look at the world they may never have noticed, or thought about. I just hope that a few people will see the film and from that decide on a Friday night to go and support their local independent/repertory cinema instead of staying at home and catching something on NetFlix.

DS: Is the art of 35MM exhibition officially dead?

MW: That’s a tough one, as I’m now a collector of 35mm films, so I can’t just say it’s dead, or I’ve wasted a whole whack of money on prints! I think that film will always be around, but it will be harder and harder to see projected. People will have to seek it out. Theatres like The Alamo Drafthouse are staunch supporters of 35mm, and film on the whole needs more people like them to stand up say “Hey, I want to see this movie on 35mm”. I was talking to a friend who’s a projectionist, and he said that there’s a group of projectionists who have started collecting prints. That thought gives me hope. Ultimately it’s the studios decision, and that’s the real tough part. They have abandoned 35mm, making it very hard for theatres to get films on film, a format that much of any repertory programmers bread and butter resides on.