The rare example of a fashion based documentary that doesn’t wallow in privilege or ageism, Advanced Style looks at the subjects of street style photographer Ari Seth Cohen’s blog devoted to stylish women over the age of 50.

It isn’t particularly deep (most fashion docs aren’t), but the women being profiled are all highly articulate and perfectly willing to joke around. They take their style seriously and they love how dressing nicely makes them feel, but they never take themselves too seriously. Also despite Cohen appearing on screen and acting as the film’s producer, it never smacks of self-promotion.

Thankfully, it’s also not all about the latest, most expensive trends or relentless digging for vintage clothes. The spotlight here is personal creativity and how it’s reflected in each of director Lina Plioplyte’s joyfully selected subjects. It’s a wonderful entry to the very stale subgenre of fashion docs. 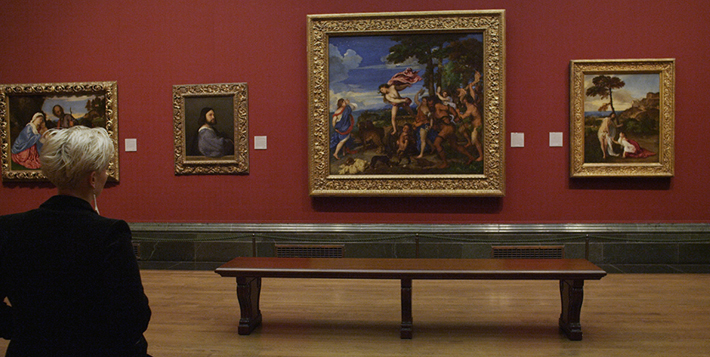 Masterful documentarian Frederick Wiseman turns his ever watchful and unwavering eye to the inner workings of London’s National Gallery for one of the finest films of his illustrious career.

As is usually with Wiseman’s film, there’s a point to be made and not necessarily a formal plot or any interaction with his subjects. He simply over the course of twelve weeks filmed what made up the essence of daily operations at the National Gallery and distilled his results into three hours.

Maybe it’s because he’s dealing with fine art, but there’s a beauty even to the moments that take place in bureaucratic boardrooms. It feels shorter than many of his longform works and feels even more playful than his most recent effort At Berkeley. He manages to create a film that’s a perfect reflection of the art, and his “go and stay anywhere that I find interesting” style works great when you’re given access to the inner workings of a great art institutions.

Whether it’s filming restorations, marketing meetings designed to talk about an economic crunch, a bizarre protest, or simply following tourists as they make their way through the halls, it’s a keenly perceptive look at the place where art and commerce meet. And you don’t really have to be a huge fan of art or Wiseman to enjoy it. You just have to be patient.

With Advanced Style running through the holidays and well into the New Year (at least until January 9th), and National Gallery being the only other new release, this will be the last Bloor Cinema column for 2014 (insert sad face here), but we’ll be back in the 2015 once things start up again. But for now, here’s what to expect from The Bloor for the rest of the calendar year.

There’s no shortage of festive fare going on at The Bloor with plenty of holiday classics screening between now and December 23rd. It kicks off with a special Home Alone Quote Along on Friday at 9:30pm (Doors at 8:30pm). Bring a canned good to donate to support The Stop and receive a free bag of props for the screening!

On Saturday the 20th you can catch White Christmas (12pm), Miracle on 34th Street (4:45pm), and Bad Santa (9:15pm). Sunday, December 21st brings A Christmas Story (12:30pm) and Love, Actually (7:30pm). The Hanukkah themed comedy The Hebrew Hammer screens on Monday the 22nd at 8:30pm. Then go into the home stretch with a triple bill of Elf (4:00pm), National Lampoon’s Christmas Vacation (6:30pm), and Die Hard (8:45pm) on Tuesday the 23rd. The best part? With the exception of the special Home Alone Quote Along, all screenings are of these films are FREE.

For New Year’s eve, The Bloor once again screens The Big Lebowski as part of Dude’s New Year’s on the 31st at 9:30pm (doors at 8:30). Host and comedian Freddie Rivas and hundreds of “Little Achievers” will ring in the New Year in style (sunglasses and bathrobes recommended). From the very first frame until well after the ball drops, even the nihilists will have something to believe in. Watch the countdown on the big screen and toast the New Year. Don’t forget to visit the White Russian express bar! Tickets are $20 (Regular), or$17 (Bloor members). Ticket includes screening, one drink, popcorn and party favours.

Also starting on Christmas Day is the popular yearly screenings of the commercials that have received the Cannes Lion Award. The Cannes Lions International Festival of Creativity Awards are one of the most prestigious honours in the advertising and communication industry, receiving more than 37,000 entries annually. See some of the world’s best commercials including a selection of bronze, silver, gold and grand prix winners from the past year. This runs through January 3rd.

Lovers of the stage can rejoice at the final 2014 installments of Shakespeare’s Globe on Screen – A Midsummer Night’s Dream on Saturday the 27th at noon – and Opera on Screen, with the Royal Opera House presentation of Donizetti’s L’elisir d’amore on Sunday the 28th at noon.

The Rocky Horror Picture Show will have its final shadowcast of the calendar year on Friday, December 26th at 11:30pm, in what should be a pretty great way to end Boxing Day.

Also, for those cinephiles looking to play “year-end documentary catch-up,” The Bloor will be holding special return engagements of a large amount of 2014 documentary hits. Titles include Jodorowsky’s Dune, Mistaken for Strangers, 20,000 Days on Earth, Citizenfour, The Case Against 8, Particle Fever, Keep On Keepin’ On, Elaine Stritch: Just Shoot Me and Finding Vivian Maier. Films will screen at various times and on various days between December 25th at January 5th, so check the Bloor website or consult your local listings for dates and times. All films are nominees for the Cinema Eye Audience Award. This prestigious prize recognizes films that engage, enrage, inspire, entertain and create intimate connections with audiences.