“What did you dream about this afternoon? A woman in your arms? The sea at your doorstep? Nooooo! You dreamt of me and of the grave. I know because I was there. And I can be there every time you close your eyes.”

When Wes Craven sadly passed away last year, the internet was filled with retrospectives and remembrances of the filmmaker’s iconic work in the horror genre. Craven was justly praised for his politically charged 70s provocations, his 80s horror icon, and the self-conscious franchise he kicked off in 90s, while ignoring the rest of his work. Fair enough, Craven was the only horror director who could lay claim to creating era-defining horror classics in three separate decades. However, he also made a handful of deeply underappreciated and smaller genre efforts amidst those iconic masterpieces that were ignored at the time and remain virtually forgotten today.

Thankfully, Shout Factory have gone out of their way to bring most of these films to Blu-ray over the last few years and now they’ve released hands down the most underrated film in Wes Craven’s storied career: The Serpent And The Rainbow. Sadly, Craven passed away before he was able to contribute to the disc like he had for the previous Shout releases of titles like The People Under The Stairs, Swamp Thing, and Shocker. However, if there’s one deep cut Craven flick worthy of being dedicated to Craven’s memory as Shout Factory have done here, then this is the one.

Made at the peak of Freddy Kruger’s pop culture success, The Serpent And The Rainbow was both the largest scale production that Craven had ever mounted and an ambitious departure for the filmmaker. It started as an adaptation of a book by anthropologist and journalist Wade Davis. He was hired by a pharmaceutical company to travel to Haiti to investigate the legendary zombie powder used to create a state of simulated death in voodoo rituals. Craven managed to take his crew across the globe to shoot on location, finding extras to chew glass and puncture their face with needles in actual ceremonies. It was an incredibly difficult, Herzogian production plagued with problems, but one that delivers the goods on the screen with a vivid sense of location and character impossible to recreate in a studio. For much of the film Craven plays with mystery and dread rather than horror, walking a careful line into an actual culture without dipping into bad taste. It’s like an adult drama with a zombie-chasing plot that adds an air of creepiness.

Of course, Craven wasn’t powerful enough to go the full drama route within the studio system, even with all the zombie references. So the movie ended up merely being inspired by Davis’ book rather than adapted from it. Bill Pullman plays a fictionalized version of Davis who doesn’t merely run into voodoo charlatans and amateur scientists who have developed a peculiarly powerful form of anaesthetic. Nope, he angers some actual voodoo priests, gets viciously tortured, and is plagued by all sorts of horrific nightmares and hallucinations. For about 3/4 of the running time, Craven nails the balance of genre thrills and anthropological study rather brilliantly. The Haitian world is palpably believable, while the nightmare visions involving walking corpses spitting snakes and being buried alive in a coffin filled with blood are some of the most purely terrifying images that he ever conceived. Eventually, things go a bit too far and the villain of the piece turns into a sort of voodoo Freddy Krueger that’s corny at best and racially insensitive at worst. It’s a bit of a bummer, yet at the same time Craven is such a clever genre master that it kind of works.

The Serpent And The Rainbow is a peculiar beast. It’s a surreal and nightmarish latex creature feature that could only have come from the 80s boom of pop horror. At the same time, it’s also a lavishly mounted production aimed at an adult audience rather than teens looking for some gory fun to inspire make-out sessions. Undoubtedly the film would have turned out far better had Craven been allowed to ditch the monster movie finale and instead created a psychological thriller with nightmare and hallucination sequences for frightening spice. However, the horror romp with high-minded aspirations that we got is a more than worthy substitute. It’s easily one of Craven’s most accomplished efforts as a director and undeniably his most underrated achievement. For years, it was too schlocky for serious critical appreciation and too serious for gorehounds. Now it feels like a movie ahead of its time, featuring a nasty torture sequence straight out of Hostel and an unapologetically adult approach to horror that fits in well with the current boon of arthouse horror hits like The Babadook and The Witch. Hopefully the flick will get some more fans to add to it’s cult now that Shout have lavished the movie with this gorgeous Blu-ray presentation. 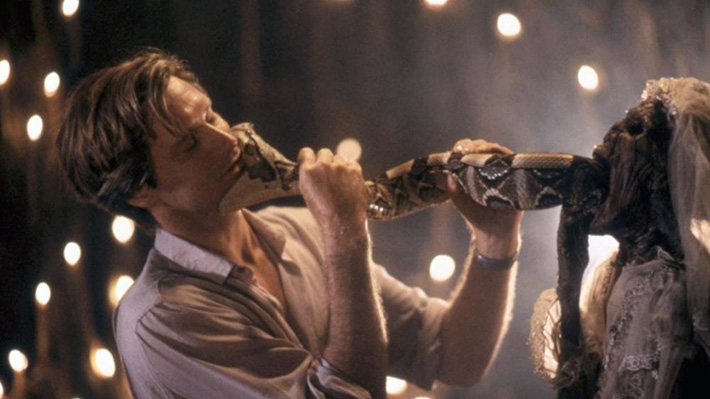 First up, Shout Factory have done a fantastic job transferring The Serpent And The Rainbow to Blu-ray. The movie was shot with a deliberately muddy color palate and is often drenched in shadows for atmosphere, so don’t expect colors to leap off of the screen. However, the jungle locations are filled with rich details that have never been visible on the lackluster presentations the Universal has provided for the cult catalogue title in the past. There’s incredible depth and clarity to the imagery that’s absolutely gorgeous and heightens the horror of Craven’s classy scare picture. The lossless 5.1 audio track is also filled with creepily enveloping sound design and an unconventional score that completes the experience. The Serpent And The Rainbow is practically an epic production as far as low budget 80s horror flicks go and this new Blu-ray shows off the technical showmanship of Craven’s ambitious production style.

Aside from the obligatory Still Gallery and trailer, there are only two special features on this disc, but thankfully they are excellent. First up is an approximately 23-minute minute long documentary featuring interviews with Wade Davis about his surreal experience watching his memoir become a genre picture, DOP John Lindley discussing the physically draining production, as well as Lance and David Anderson describing the surrealistic effects sequences. It’s a nice (if somewhat ramshackle) doc outlining the unique production challenges. Next up is an audio commentary by Bill Pullman delving into a more personal account of the difficult shoot, discussing the political unrest the crew faced in Haiti as well as the pain in the ass of shooting on location, and of course the quiet brilliance of Wes Craven. The documentary and commentary delve into all of the technical challenges and thematic complexity of The Serpent And The Rainbow rather well. Obviously, it’s a shame that Craven himself wasn’t involved with the disc given how insightful and self-effacing he’s been on Shout Factory discs in the past. Still, it’s obviously no fault of the company that Craven wasn’t involved, just an unfortunate matter of timing.

Shout Factory’s The Serpent and the Rainbow Blu ray is a fantastic disc and a must own for any self-respecting horror fan.