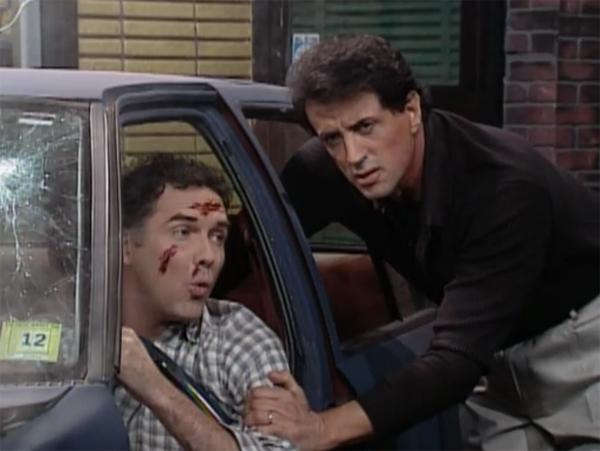 Gang, we’re god-knows-how-many weeks into this Sylvester Stallone-a-thon, and even though we’ve left most of his artistically ambitious work behind and are now in the midst of his right-wing muscleheaded period, I must admit that my affection for “Sly” grows with the big guy’s biceps. Maybe this is Stockholm syndrome talking, but far from growing weary under the constant onslaught of Paradise Alleys and Staying Alives, I remain ever-more convinced in my hunch that Stallone seems like kind of an alright guy. Y’know?

Certainly he seems like more of an alright-guy than any of his fellow ‘80s/‘90s action stars. Sure, Schwarzenegger is fun to watch, and often downright personable (especially when he’s just trying to find his kid a friggin’ “Teeuurbo-Man Daahhl”), but as we learned in Pumping Iron, he’s also a conniving, amoral prick. Chuck Norris has no time for such frivolities as “affability.” Steven Seagal is a greasy egomaniac, Van Damme is an off-brand Schwarzenegger, Don “the Dragon” Wilson is likely too busy to fit us in his schedule, and Dolph Lundgren was probably made in a lab out of plywood and steel. Stallone, by contrast, is the sort of guy I can imagine holding court at a Flatbush bar, talking about what it’s like to work with Carl Weather, or imparting hard-earned wisdom from his years of stardom. Like a real-life version of those Q&A’s he does on Ain’t It Cool News whenever he hires Harry Knowles to be his publicist.

To my eyes, Stallone’s 1997 appearance on Saturday Night Live solidified his status as “Least Hateful ‘80s Action Star.” In almost every sketch, he is commendably self-effacing. In the monologue, he begins talking about his political views, and his desire to do “more thoughtful films like Copland,” before Mickey (Jim Breuer by way of Burgess Meredith) insists that the audience would much prefer for him to be “a big dumb animal!” In the best sketch, Stallone tries to help a dying car-crash victim (Norm Macdonald), only to be incessantly reminded of his many failures. On Over the Top: “Hey, remember that movie Kramer vs. Kramer? Yeah, that was about child custody too, but it wasn’t that good. I dunno, it was missing something… Yeah, what was it missing? Oh, I know – arm wrestling!”

Or, here’s another example: Rhinestone (1984), the musical/comedy he made with Dolly Parton, directed by the exceptionally not-very-good Bob Clark (yeah, he made A Christmas Story, but he also made Porky’s, She-Man, The Karate Dog, and Baby Geniuses, parts 1 and 2). Commonly regarded as the greatest atrocity ever committed by anyone, Rhinestone stars Stallone as an average New York cab driver who a popular singer (Parton) has been challenged to turn into a star, Pygmalion– (or, if you like, Misty Beethoven)-style. A good chunk of the training, I regret to report, takes place on Dolly’s farm in Tennessee, which leads to plenty of fish-out-of-water shenanigans.

Now, Rhinestone is certainly a bad movie. It’s probably even the worst movie we’ve encountered on this marathon so far (with the extremely arguable exception of Party at Kitty and Stud’s), and I suppose Stallone’s unhinged performance is, by any objective standard, very bad. And yet… I dunno, the guy has a certain charm. When we first encounter Stallone driving a family of stereotypical Japanese tourists, he’s incredibly obnoxious and racist (his dialogue includes the requisite sushi?-that’s-raw-fish! tomfoolery), but he makes even this odious material palatable through sheer force of knuckleheaded charisma. I’ve always preferred Stallone’s lovable-goof mode to his snarling-badass setting, and Rhinestone came very close to breaking my Loveable-Goof-o-Meter™.

And the singing! Don’t even get me started on Rhinestone’s toe-tappin’ music! Not long ago, I was making fun of Stallone when he tried to belt out the sentimental theme song of Paradise Alley with his molasses-thick singing voice, but whenever he graced a barroom stage in Rhinestone, my invariable reaction was: “Hey, he’s a somewhat endearing stage presence, in a Tony Orlando sort of way.” Sure, maybe my expectations are spectacularly low when it comes to Stallone musical numbers… or maybe he’s just really darn likeable.

Of course, maybe I’m wrong. Maybe he’s not the sweet-natured lug of Rocky, the streetsmart wiseacre of Paradise Alley, or even the sex-machine of Party at Kitty and Stud’s, who at least knew how to throw a good party. Maybe it’s stupid to equate action heroes’ on-screen personae with their off-screen selves. Maybe for all his self-deprecating TV appearances, Stallone truly has become the cruelly insensitive, fame-hungry (and poorly endowed) monster ex-wife Brigitte Nielsen has alleged. Maybe he’s as difficult to work with as directors like Norman Jewison and John G. Avildsen have indicated, and maybe he’s arrogant and rude enough to appall even beloved Tango and Cash co-star Jack Palance.

Well, fuck it. I’ve got a whole lot more Stallone movies to get through so I’m not going to sit here and let you say things like that. I’m going to choose to believe that Stallone is exactly Rocky Balboa and that’s that.