“Think of the carnival. It will sort us all out. I have no doubt.” – Dr. Stanley

Papa’s Got a Brand New Leg

Will: It’s been two weeks since Ice Master Thomas Blanky faced down the Tuunbaq high above the decks of Terror – with some help from Mr. Hodgson’s well placed six-pounder shot. The not-quite-polar bear, or “Mr. Teeth and Claws” as Commander Fitzjames describes it, appears to have survived the encounter, but wounded and burned it has not bothered the men since.

Peter: Blanky is fine, but last week left us with a different kind of casualty: Captain Crozier is weathering a terrible withdrawal from his beloved whiskey, attended to by the loyal Jopson. Nobody knows what Crozier is up to save the men he told fourteen days previously, leaving poor old Fitz to deal with one of the worst cases of mass seasonal affective disorder ever committed to film. But the darkness assailing the men of Terror and Erebus is invisible, leaving everyone to their monsterless and mindless work as the vernal equinox approaches.

Will: Save for Crozier’s conspicuous absence, things aboard ship appear to have returned somewhat to normal – or at least as normal as they can be under these increasingly dire circumstances. Lt. Gibson runs down the ship’s remaining stores of provisions and fuel at the officer’s meeting, and the picture he paints is grim: the coal that heats the ships will run out soon, the food that hasn’t spoiled already will run out by next winter, and the lemon juice brought along to ward off scurvy has lost all of its antiscorbutic properties. Even darker days lay ahead. The ship’s company is to be put on 4/5ths rations moving forward, and Fitzjames’ next order to preserve as many canned goods as possible means that a long march south is not far off.

Peter: The doom continues to mount and it’s delicious. That said, the talk of the diminishing antiscorbutic benefits of lemon juice highlight an area where AMC’s The Terror could stand to add a bit more clarity. In this episode, multiple primates suffer the mutilating effects of both scurvy and lead poisoning. Jacko, the poor little monkey used by Goodsir as a culinary canary has the gums of a number two pencil, while Fitzjames looks in the mirror and sees his hairline is bleeding from the follicles (classic scurvy move). With so many invisible threats facing our doomed seamen, it’s hard to keep track of why any given character is falling apart.

Will: Spirits (liquid and otherwise) and provisions may be running low, but wood, it would seem, is not in short supply, as it’s revealed Mr. Blanky is now sporting a shiny new wooden leg. Coffins and peg legs. The officers may be trying to insulate the men from the seriousness of the situation, but I suspect the poor state of affairs is not lost on the ship’s carpenter.

Will: Even in his feverish state, Francis Crozier has a way with words. Not that I have experienced the symptoms of withdrawal, but “like Christ, with more nails” is a beautifully torturous description of what the process must feel like. Also, if I were going through delirium tremens due to alcohol withdrawal I can think of no better person to have at my side than Mr. Jopson. Incredibly caring and loyal to a fault, he tends to Francis like he would his own mother – in fact, he cares for his captain as he did with his own mother, who was addicted to laudanum. By the sounds of it poor Jopson’s mum did not make it through the ordeal, which certainly explains the young petty officer’s devotion here. He is determined to get his commander through this!

Peter: The Crozier withdrawal plotline is highly abridged and revised from the source material, and while I prefer this episode’s take on Francis’ recovery, it’s worth noting that the novel uses the gauntlet of sweat and expulsion as a way of teasing extrasensory powers. In Dan Simmons’ book Crozier’s grandmother is a mystic, and as he writhes in his cabin he is given visions of the future.

Will: I think Francis’ powers of prediction have already been well proven on the TV version of The Terror. Is it mystical wisdom or just experience? Whether he actually is able to see the future or not, nearly everything Crozier warned Franklin, Fitzjames, and the other officers of has come true. The ships are trapped, the food is running out, and the long march is on the horizon like the first sunrise of the year.

Peter: When Mr. Collins visits Dr. Stanley for a treatment to his inner darkness, the mad doctor prescribes fun. And thankfully, on the encouragement of Ice Master Blanky, Fitzjames dug out the late Sir John’s tickle trunk and ordered a grand spring carnival.

Will: Ah yes, what has ever gone wrong when men confronted with their own mortality are given leave to throw a party? 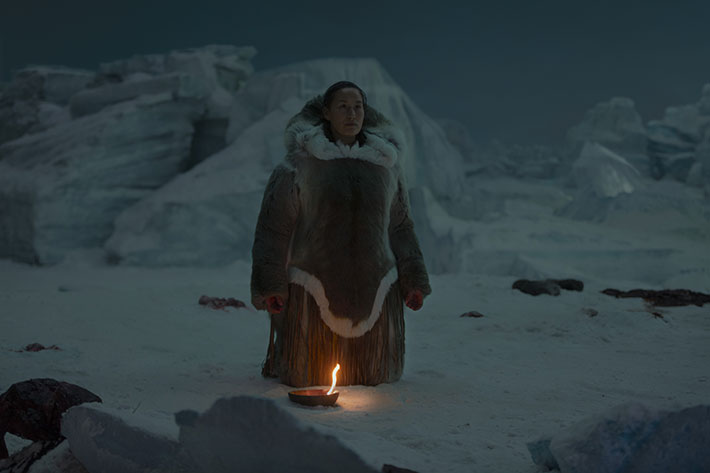 Peter: We were treated to further insight on Lady Silence’s father’s relationship to Tuunbaq. Calling it to her through song, she spoke to the abominable thing of taking her father’s place as its shaman. And then she cut out her tongue.

Will: Actress Nive Nielsen is also a wonderful singer-songwriter, so I’m happy the producers saw fit to put her other talents to use before robbing her character of the ability to sing! The real question is what this blood sacrifice mean for the Tuunbaq going forward? Will it still be as hostile to the British interlopers?

Peter: Like so much of “A Mercy” the Tuunbaq scene is highly revised from the book. As I mentioned in a previous recap, Lady Silence is tongueless for the entirety of the novel, which is the literary genesis of her nickname, and therefore there is no need to read about her grisly self-surgery.

Will: I’m glad we – and Mr. Goodsir – got to spend at least a little bit of time with Lady Talksalot before she finally lived up to her true namesake. Despite their respective troubles, the relationship between the two has been a bright spot in an otherwise extremely dark tale. Goodsir’s Inuktitut dictionary is a casualty of Silence’s fateful decision, but will there be more now that the Tuunbaq is in her thrall?

Peter: As if Silence’s equinox could get any worse, she shows up to the party late but not late enough. Bleeding from the mouth the Netsilik woman is present for Dr. Stanley’s horrid self-immolation.

Will: In his deranged state did Stanley see his attempted mass murder as the titular mercy? There’s a grim logic to it, in a way. Better a quick (and warm) death for the men than the lingering, frozen fate that likely awaits them. In any event, what a piss poor party guest Dr. Stanley turned out to be.

Peter: It’s an incredible feat of televised storytelling that The Terror is consistently becoming more beautiful and horrific every week. The three-way juxtaposition of the carnival inferno with the ghostly aurora in the sky and the first sunrise of the new frozen year was lyrical and haunting. In the aftermath of the hot carnage, as Fitzjames collected the dead and Goodsir prayed he wasn’t the only medical man left in the expedition, the only thing more bleak than these men’s prospects for survival was the inevitable sunset.

Peter: Cornelius Hickey continues to be the most compelling character on TV. One moment he’s sticking his finger in the exposed brain of Mr. Heather, the next he’s genuinely trying to save his shipmates (albeit with a murderous pragmatism). No other character in recent memory has so quickly swung me from abhoration to sympathy like the slippery caulker’s mate.

Will: Poor Dr. MacDonald! Did Hickey really have to stab the canvas tent so forcefully – and at chest level? Why not cut from the bottom up? Oh well. Me thinks the poor doctor won’t be the last person on the receiving end of the caulker’s blade.

Peter: Another note on Hickey in this episode: what are the odds his carnival attire was a reference to Dan Simmons’ Dickensian speculative novel Drood?

Will: We briefly touched on the rumours surrounding Sir John Ross’ Arctic expedition in the Flotsam and Jetsam section of last week’s recap, and early in this episode Mr. Blanky reveals the truth of that ill-fated voyage of which he was a part to Fitzjames. The Ice Master is a survivor through and through. Visiting this part of the world again is revisiting the trauma he experienced. Blanky reveals that the expedition was nearly lost in large part to Ross’s command style, and things got so bad that he and the men seriously contemplated killing their former commander. He tells Fitz that he believes the Franklin Expedition can head off such a fate, but only if its commanders throw the men a bone, so to speak.

Peter: Blanky’s was the winner of best monologue in an episode of absolutely fantastic monologues. While the monster attacks and tent fires make for excellent tent poles, The Terror’s greatest strength is its elegant writing, superbly acted.

Will: That might be my favourite scene of the series so far – and that’s saying something. Many might not recognize Blanky actor Ian Hart from his role as Professor Quirrell in Harry Potter and the Philosopher’s Stone. He also played John Lennon in the surprisingly decent Beatles biopic Backbeat. Both Hart and Mr. Blanky are quickly becoming favourites of mine.

Peter: One must wonder if this all could have been avoided had Dr. Stanley ever been invited to a wedding.