Day Four of our December search for the “Ultimate Christmas Movie” brings with it a set of brand new festive clashes. The first face off features two heart-warming, child-friendly Dickensian Carols, both courtesy of Walt Disney Pictures: The Muppet Christmas Carol and Mickey’s Christmas Carol. Kermit or Mickey Cratchit, Miss Piggy or Minnie Mouse, Scrooge McDuck or Academy Award-winner Michael Caine—these are the tough choices. Not enough Santa for you in that match up? Today’s other round features enough of the big guy to satisfy even the pickiest of elves as the original Miracle on 34th Street takes on The Santa Clause. Ho, ho, how’s that for choice?

Dive in below as four That Shelf writers stump for their favourites, then vote for yours!

I remember when my aunt gave my brother a VHS copy of The Muppet Christmas Carol one Noël. It was the first movie we ever owned. Our mom was so mad and Scrooged it up for a day or two, but we attacked this contraband gift like two teenagers gifted a secret stash of booze. We watched The Muppet Christmas Carol every Christmas Eve during our childhood through adolescence and still do our best to revisit it. This fun and accessible take on the enduring Christmas classic might have the best shelf life of any Muppet movie. The Muppet Christmas Carol is endlessly rewatchable no matter how old one gets. The tale of Bob Cratchit (Kermit) and his enfeebled son Tiny Tim teaching cranky Ebenezer Scrooge (Michael Caine) to favour charity over avarice never fails to lift one’s spirits. The film is to kids what It’s a Wonderful Life is to grown-ups. Plus, the film offers Michael Caine the role he was born to play, two Oscars and a Batman franchise be damned. – Pat Mullen

Of all of the child-friendly versions of Charles Dicken’s classic A Christmas Carol, Disney’s Mickey’s Christmas Carol reigns supreme. What makes this version special is the way it manages to stay true to the source material while still sprinkling in that classic Disney magic. There is something endlessly charming about watching penny-pinching Ebenezer Scrooge (played by Scrooge McDuck) convincing two men collecting money for the less fortunate that his lack of donation is in the collectors’ best interest. After all, if there are more homeless people, then charity organizations would be out of work. Little moments like that, and the way Tiny Tim spots the teddy bear in a newly converted Scrooge’s pocket, make this adaptation the perfect starting point for introducing kids to Dicken’s work. Filled with beloved Disney characters, and making the most of its compact running time, Mickey’s Christmas Carol is a pure delight. – Courtney Small

A Christmas classic by any definition, the Academy Award-winning Miracle on 34th Street entered the hearts and minds of children everywhere just two years after the close of World War II. Not surprisingly, a war-weary populace eagerly embraced the deeply conservative themes of Miracle on 34th Street, hoping to temporarily escape into the simple, reductive world where a seemingly delusional elderly man played by a pitch- and tone-perfect Oscar winner, Edmund Gwenn, convinced that he’s in fact the real Kris Kringle (aka, Santa Claus) and not an ersatz imitation (i.e., a department store Santa), brings not just the spirit of holiday joy and happiness into the lives of a broken family (broken because they’re a father/husband short of the traditional, throwback nuclear family), but also renewed faith and hope in the storybook magic missing from the lives of audiences on the other side of the silver screen. As heartfelt and heartwarming as Miracle on 34th Street seems or even is, its pro-capitalist, pro-consumerist, and, of course, pro-nuclear family (strictly heterosexual, it should be added) themes resonated then and now with viewers. Miracle on 34th Street also introduced the world to a nine-year-old actress, Natalia Nikolaevna Zakharenko (aka Natalie Wood) born to Russian immigrant parents in San Francisco, California. – Mel Valentin

At its very core, The Santa Clause is a film for true believers in the power of Christmas. Recently divorced Scott and Laura (Tim Allen and Wendy Crewson) have differing views about how to raise son Charlie (Eric Lloyd), which gets further complicated when Scott gets caught in a contract loophole that makes him the next Santa Claus. Scott has to grapple with his changing physique and new cravings all while trying to maintain that their adventures at the North Pole are just dreams and Charlie needs to grow out of this magical thinking. But what is Christmas but the power of magical thinking? The Santa Clause does some clever mythology work when it comes to coming up with its rules for the Big Elf in Red, and does so with unapologetic affection for the season and a child’s version of the magic it brings. Beautiful escapism at its jolliest. – Deirdre Crimmins

The elimination showdown runs from December 1 until the 23, with the Ultimate Christmas Movie being unveiled on Christmas Eve! You can vote here, on Twitter, or on Instagram. Find out if your favourites are in the running below, then tune in tomorrow for two new face offs… 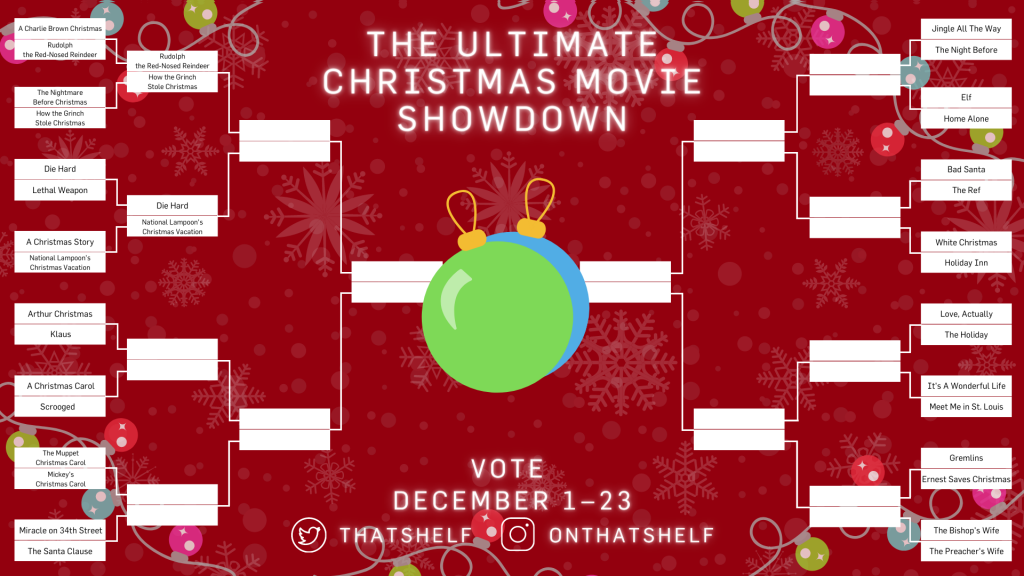