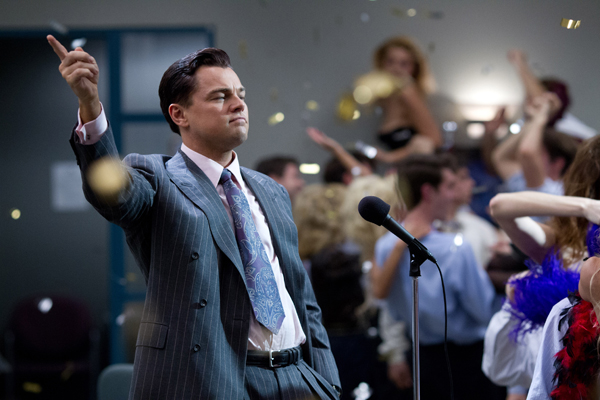 It will take a strong stomach and a considerable amount of endurance to make it through all three hours of Martin Scorsese’s blissfully off-the-wall and gleefully deranged The Wolf of Wall Street, and I wouldn’t want it to be any other way. This isn’t the Scorsese of Goodfellas or Casino that’s returned to the screen, and certainly not the creator of high profile studio features The Departed, Hugo, or Shutter Island. This is the Scorsese that’s one step to the right of Taxi Driver; the filmmaker who made After Hours and Bringing Out the Dead. It’s a filmmaker operating on all artistic cylinders with one of his favourite collaborators for a film that’s bound to be misread by people who aren’t willing to look deeply into its black and often hilariously misanthropic heart. It’s his best film in years, and yet there are probably a great number of people who just won’t get it (or just flat out won’t care to).

From a screenplay by Boardwalk Empire creator Terence Winter, Scorsese relays the (probably not entirely) true story of high finance hustler Jordan Belfort (Leonardo DiCaprio, joining Scorsese for the fifth time). Disillusioned by starting his first day of being a professional stock broker on the infamous Black Friday of October 1987, Belfort begins pushing practically worthless penny stocks on unsuspecting rubes to make quick cash. Quickly establishing his own shady firm – ripe with creative accounting, rampant office sexuality, and almost nonstop drug use – Belfort eventually starts making millions every week and never once thinking about getting caught or potentially losing everything he worked so hard to achieve.

In a year filled with narratives of people trying to achieve their own screwed up version of “The American Dream” (Pain & Gain, The Bling Ring, Spring Breakers), Scorsese comes out at the end of this year like a headlining act at the end of an already epic concert to deliver a three hour long set of scorching material before spiking the microphone and lighting that motherfucker on fire. It’s pure, unfiltered avarice, greed, and arrogance. It’s the kind of film that will end up adorning the walls of dorm rooms of students who have no clue what the actual message of the story is. Probably next to Brian De Palma and Oliver Stone’s Scarface there might not be a harsher mainstream depiction of drug abuse among so many people who have gotten rich by being amoral assholes.

The sheer length and occasionally rough editing (the film was somewhat rushed to make it to theatres by the end of this year, cut down from a longer four hour final cut) suggests a film that might have gotten away from Scorsese. That simply isn’t the case. Those rough edges and the sometimes lengthy set pieces that pepper the film only serve to underline Scorsese’s thesis of a man who has lost control without realizing he’s lost it.

Early on, following a fourth-wall breaking speech from Belfort explaining just how much he loves drugs, money, and sex, there’s an interesting camera shudder that happens in a scene when Jordan pulls into a parking lot for his first day of work at a strip mall investment centre in Jersey that pushes cheap stocks advertised in the backs of Hustler and Popular Mechanics. This is the moment that signifies the drugs from the start of the film have kicked in, and the remaining two hours and forty five minutes or so will unfold like a years long narcotic bender, complete with all the highs and lows that entails. Jordan is never seen sober, nor will be ever be allowed to be seen sober from that point on. From then on he becomes one of the most reprehensible characters in film history, played to the hilt by a never better DiCaprio.

It’s doubtful that this will finally be the year that Academy voters finally recognize DiCaprio’s efforts for such a purposefully sleazy film, but it’s the actor’s wildest and most well rounded performance. He inhabits a human being so monstrous he makes Alec Baldwin from Glengarry Glen Ross and Tom Cruise in Magnolia look like candidates for humanitarian awards. Running through self-agrandizing speeches with the aplomb usually reserved for professional wrestling heels trying to goose the audience and trying in any way to make Jordan’s noticeable vulnerabilities known to an audience who probably wants him to die immediately takes a lot of physical effort. Heck, he even gets a chance to play one of the best bits of physical comedy in recent memory when he’s doped up on a shitload of Quaaludes and trying to get to his car to stop a friend from doing something idiotic with his money.

While Jordan is in control of his own destiny, merely stringing everyone in his life and the audience along throughout his life, that doesn’t mean there isn’t a considerable amount of exceptional supporting performances.  Jonah Hill certainly steals a lot of scenes as Jordan’s creepy, cousin marrying, big toothed business partner. Filmmaker Rob Reiner returns to acting as Jordan’s constantly irate father and overseer of the company’s budgeting. Matthew McConaughey comes in to make a brief, but indelible impression as Jordan’s early mentor, establishing the film’s almost primal, Neanderthal-ish depiction of 80s stock brokers. Kyle Chandler gets to play one of the film’s few decent human beings, albeit one with an almost uncharacteristic streak of sarcasm as an FBI agent assigned to take Belfort down. Jean Dujardin pops up late in the film as a crooked Swiss banker who’s eager to work with Jordan as long as it means getting paid. And while it’s decidedly a boys club and testosterone driven film, Australian actress Margot Robbie gets to play the only character in the film who can actually better their life as Jordan’s girlfriend and soon to be wife.

A hard living filmmaker in his heyday, Scorsese attacks Winter’s material like a personal baptismal; an expunging of all of his own past sins. While many might look at the film and say that it’s merely glorifying and playing into a lifestyle that shouldn’t be placed on a pedestal, that would be missing the entire point. Scorsese is laughing at these people who will never learn their lessons and could care less about morality. It’s the most amoral morality play I think I have ever witnessed, and the three hours go by faster than lines of cocaine up these characters’ noses. It’s exhausting in a wonderful way and some of the most powerful filmmaking of the year. If you don’t leave the theatre either seriously in thought about what you just saw (or like you suddenly need to go to rehab even if you’ve never drank or done drugs in your life), the movie has served its purpose. If you come out wanting to be like Jordan Belfort, however, I feel incredibly sorry for you.