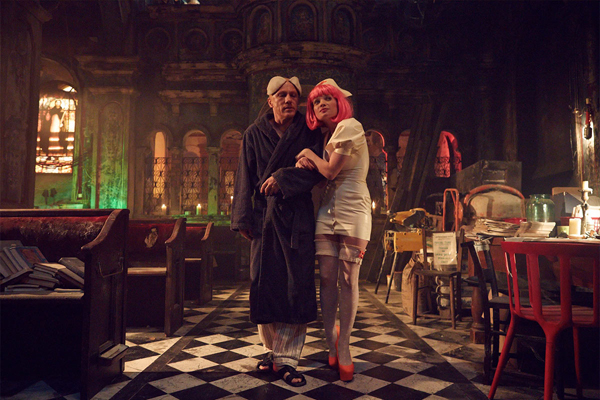 If you ever hear Terry Gilliam speak, you’ll get a very similar experience to watching one of his movies. The man is hyper-articulate and intimidating in his intelligence, but he also leaps from one topic to the next with rapid fire ADD and is more than happy to slip in a little base-level humor at any moment. He can somehow talk about everything and nothing at the same time, a quality that carries over directly to his movies and not necessarily in a bad way. Certainly that’s true of his latest effort The Zero Theorem. A loose companion piece to his 1985 classic Brazil and 1995’s 12 Monkeys, it’s a sprawling, thoughtful mess of a movie that tosses a cavalcade of ideas (both visual and philosophical) at the audience with almost reckless abandon. There’s a plot, but at times that can seem almost inconsequential. It’s as if Gilliam was so hungry to make a movie after a few years out of the game that he found a script he liked and then piled on a few dozen ideas that he had for other unmade movies regardless of whether or not they fit into a singular grand design. And yet, it’s still far from a bad movie. As with any Gilliam flick, The Zero Theorem makes for compulsive and often brilliant viewing. Whether or not all the intriguing pieces actually hang together as a whole is almost beside the point.

A shaved-to-the-scalp Christoph Waltz stars as a lonely and depressed IT button pusher in a vaguely dystopic sci-fi landscape frighteningly close to our own. It’s a world where colorful screens everywhere compete for the population’s attention by the second and everyone seems numbed by sensory overload. Waltz in particular is stuck in an existential funk that the company he’s working for seeks to take advantage of by assigning him to solve the Zero Theorem, a complex mathematical equation that essentially proves everything is equal to zero (cheerful thought, no?). So, since this is a Terry Gilliam movie, Waltz not only accepts the task but sets up shop in an old church where he works on the theorem via what appears to be a building block videogame (complete with cool controller). From there, it’s a dark journey into the soul for Waltz as he gradually accepts the meaningless of existence. Along the way he’s surrounded by colorful supporting characters like David Thewlis eccentric office drone, Melanie Thierry’s digital sex worker with a heart of gold, Matt Damon’s white haired Manager of seemingly everything, and Lucas Hedges as a boy genius computer whiz who also happens to be Damon’s son. They all fit into the movie in ways that are somehow both tangential and essential. Zero Theorem isn’t really a film defined by plot or even thematic cohesion. It’s more about the ride and the ideas that pop up along the way.

At this point, it almost goes without saying that this, like any Terry Gilliam movie, is visually astounding. The neo-colored world he’s created fits into his beloved old-meets new aesthetic. Ancient grey buildings are covered with blindingly colorful digital screens. Costumes take on a cartoonist’s visual distinction as they always seem to describe the character wearing them. With the exception of the stoic Waltz, the entire cast pitch their performances at an almost hysterical sketch comedy level. They’re big and broad and silly (especially Tilda Swinton’s bucked tooth virtual therapist with a Scottish lilt who steals the movie whenever she’s on screen) with little concern for reality. It’s a movie where everyone and everything seems to communicate some big idea about the emptiness of living in a digital landscape, the difficulty of human connection in a world driven by sensation, the meaningless obsession of professional growth, the monotonous evil of office work, and a few dozen more thoughts that Gilliam had rattling around his brain. After a single viewing, it’s hard to say what all the eye-catching visuals and cynical societal observations are supposed to suggest a whole, but perhaps that’s the point. It’s a movie about a quest to prove the inherent meaninglessness in everything, so perhaps the possible overall meaninglessness of Gilliam’s latest pop art extravaganza in deliberate. Or maybe it isn’t. The only person who knows for sure is Gilliam and maybe he doesn’t really know either.

The Zero Theorem is one of those movies that’s simultaneously fascinating and frustrating. There’s no denying that it’s filled with more content than all of this summer’s blockbusters put together. While Gilliam never spoon-feeds his audience anything, he’s also a director that would never dream of boring them either. It’s without a doubt one of his most beautiful cinematic puzzles and one that feels both entirely of the moment and from another era entirely. In Gilliam’s best movies, like Brazil or Fear and Loathing in Las Vegas, all of the seemingly disconnected diversions at least share a consistent sense of purpose. Zero Theorem is not one of those movies.

It’s one of his more scattershot efforts, like The Imaginarium of Doctor Parnassus or The Adventures of Baron Muchausen, that harken back to his early days of sketch comedy and surrealism. If you’re a fan of Gilliam or visually driven movies, the film is certainly vital viewing. It’s a shame that it doesn’t hold together extremely well, but when the best sequences and images are flickering in front of your eyeholes, that hardly seems to matter. Even an undisciplined Terry Gilliam movie is still a Terry Gilliam movie and as a result offers more imagination in a single scene than some filmmakers manage in an entire career.