Death is an elusive topic because we only get one side of the story. It is something that everyone does, and most right-minded people fear, but those who’ve died can’t take part in the conversation. As such, we can never fully understand a common experience that has captivated humanity for its entire existence. Video games, however, allow us to get as close to expiry as conceptually possible without crossing over.

Games have dealt with death ever since Steve Russell’s Spacewar! pit players against each other in outer space torpedo fights in the 1960s. There, death was a scorekeeper marking points for players and their opponents, a trend that continued into the modern era. Frags transform death into the equivalent of a two-point shot in basketball, and the term “extra lives” has come into regular parlance thanks to the arcade days and the console games they would inspire.

Arcade games used death as a business model, charging players another quarter after every visit from the reaper. But when the primary gaming space became the living room, the maddening impossibility of games like Battletoads became a mark against them. Games got easier because there was no financial reason to make them impossible, and movie-like narratives turned out to be more popular than infuriating difficulty.

Eventually, that gave birth to an era of undying heroes. If Nathan Drake gets shot to death in the opening scene of Uncharted 2, how can he kill all those Russians and native people later in the game? Nathan Drake can’t die, not really, at least not in any sense that matters. When you die in Uncharted, the game erases your failure and lets you try again, offering a comforting reminder that it didn’t really happen.

That attitude, though still prevalent, is changing. Death is starting to matter again in games, but today it is less about keeping score or making money and more about finding new ways of experiencing art.

I had never played a From Software game before trying Bloodborne, and as such, the initial hours I spent playing it were harrowing. A massive action RPG set in a Victorian-era horror world, the game’s checkpoints are few and far between (and almost always hidden inside of bosses). To succeed in Bloodborne requires near mastery of the game’s controls and the world’s enemies are brutally efficient at murdering your in-game avatar.

After twenty tries, the prospect of dispatching Bloodborne’s initial mob of afflicted townsfolk actually made me nauseous. Then I died some more and the game broke me. I restarted from scratch, building a new character and choosing a new starting weapon. That’s when the game revealed itself.

I hadn’t noticed it before, but the first thing you do in Bloodborne – even before receiving your equipment – is die. You are faced, unarmed, with a werewolf. In order to progress, the beast must kill you and you need to see the game’s death sequence play out on screen. Then, after equipping yourself in the game’s hub world, you return to the place where you died and kill the beast. As you play further, you notice the bloodstains left by other players who’ve died, and activating them shows you their fatal mistakes.

The lesson is that in Bloodborne death is progress. Upon dying, you don’t reset at a checkpoint. You respawn along with all the game’s enemies and without any of the items you used in your previous life. Harsh, sure, but rewarding. Bloodborne, unlike Uncharted, acknowledges every moment of play, not just the ones that didn’t result in a death. Those deaths really happened.

I have played for hours in some of Bloodborne’s hauntingly beautiful environments with nothing to show for it but an empty inventory, yet I have made progress. With every death the game rewrites the save file on my brain, my spilt blood staining the stone path at the feet of other players I’ve never met. “This is what I did wrong,” says my blood. “Go do it right.”

While Bloodborne is like the death montage in Groundhog Day with more axes, Sunless Sea, a maritime lovecraftian roguelike form Failbetter Games, uses death as an episodic narrative device. Whereas other roguelikes simply make you start over again with nothing but the lessons of your mistakes, Sunless Sea places the player’s failures into a linear narrative to build its world.

The game allows you to build a character and set a goal before taking to subterranean seas in an old steamboat. When you die, as is inevitable in many cases, Sunless Sea lets you specify the main beneficiary named in your character’s will. The previous generation bestows a bonus on its descendants, be it a sea chart or a surviving member of the previous crew. The beneficiary becomes your new character, and the gameplay benefits pale in comparison to the narrative importance.

Mechanically, dying in Sunless Sea is the same as dying in any other roguelike. The game ends and you have the option to play again, hopefully with a more successful result. But naming a beneficiary makes the game feel like a multigenerational story akin to an epic poem or Gabriel Garcia Marquez’s 100 Years of Solitude. When your deaths are placed in a narrative sequence, they are turned from marks of failure into acts of historical importance.

In games, our past failures are often unrelated to a current playthrough. If we continue playing after we die, we view each attempt as a separate story, a new beginning to the same narrative. In Sunless Sea that is not possible. Every character lost at sea is another addition to the legend. 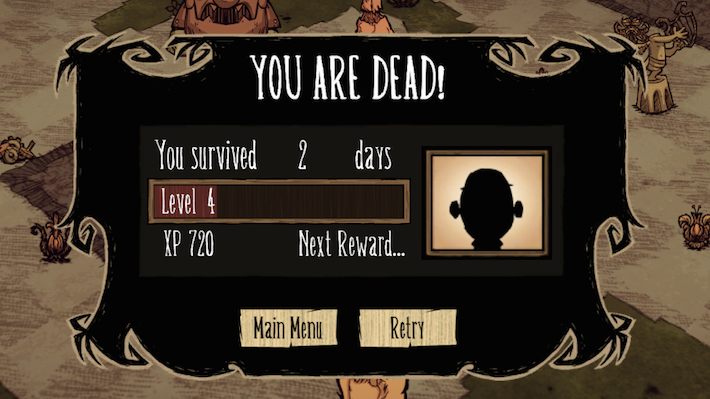 Sunless Sea and Bloodborne turn death into an integral game ingredient, letting us know that each life matters instead of ignoring it to tell a fixed story. But nothing captures the motivating effect of our terminal moments like Klei Entertainment’s Don’t Starve.

A morbid survival roguelike, Don’t Starve emulates the narrative dissatisfaction of real life by making character death the only end to the game. Like life, Don’t Starve plunges you into a world with very little context and then it constantly threatens to kill before you find any sort of meaning or do anything of consequence.

Though there is an optional, objective based campaign with a narrative conclusion, Don’t Starve’s primary sandbox mode only ends when you die. You forage and hunt and build shelter. You survive one night, then two and three, and you realize that this is it. The end of the game is the end of you and it’s not an ending you want to see.

It speaks to a very primal survival instinct. In Don’t Starve you are motivated simply because you’ve already spent so much time not dying. There’s no boss at the end of life – no 30-minute FMV, no trophy, no new-game plus – just death. It doesn’t feel satisfying because it robs us of the closure we expect from art.

And yet, life goes on without us. We may come to an unsatisfying end, but we fit into the narratives that others have for us. Our peers will see what we did and learn from our memories, our progeny will continue to sail the seas that consumed us, and though they will also end the same way, the cycle will continue as long as there are players willing to press start and play until they die.