Paradise Lost trilogy filmmaker Joe Berlinger looks at one of the most notorious and wanted gangsters in US history: James “Whitey” Bulger, the notoriously iron fisted and widely feared head of Boston’s Irish mob who disappeared almost without a trace in 1994 until his capture in California in 2011.

Berlinger certainly captures the fear felt by local residents shaken down by Bulger and his cronies and just how cutthroat he was when it came to rising through the ranks of the mafia, but he also happens upon an even scarier part of the story: that Bulger was a valuable government asset (something he vehemently denies to not look like a snitch that needs to be taken out) and that the US government might not want him to stand the trial that his victims are hoping for.

Bulger (who was clearly the template for Jack Nicholson’s character in Martin Scorsese’s remake of Infernal Affairs, The Departed) is a fascinating subject and Berlinger is definitely talking to all of the right people. In one unforgettable moment his mission to look at one of the most high profile shotcallers to ever live becomes potentially deadly, but it’s even more shocking to see how Bulger’s own defense is doing more to assuage the fears of victim’s families than the government’s prosecuting attorneys. That’s the real shock in this film that will stick with you long after it’s over. 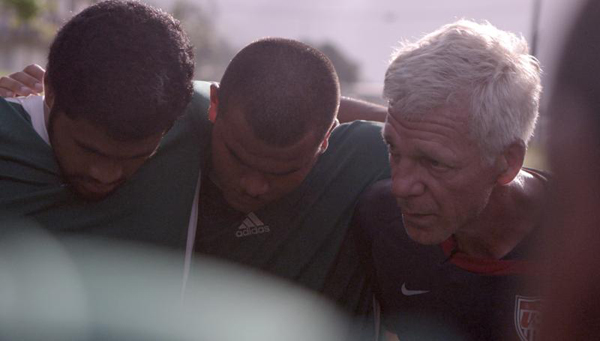 There might not be a team in the history of sports to have a more ignominious place in the history books than the American Samoa professional soccer squad. In 2001 they famously lost 31-0 to the Australians in the worst ass-whooping in the history of the game. When documentarians Mike Brett and Steve Jamison began following the team for their immensely crowd pleasing and almost bigger than life documentary they hadn’t scored a goal in six years and hadn’t been to any tournaments in four years. Enter former American and Dutch soccer coach Thomas Rongen, a ringer hired by the U.S. soccer association to help turn things around for a national team made up of labourers who never left the island and teens who will soon leave to join the military to pursue better opportunities off the island.

Brett and Jamison don’t really have to stretch too far to make their tale feel like a classical sports film in the vein of Cool Runnings, The Mighty Ducks, Mystery, Alaska, or any others where people who have no business playing their intended pastime find ways to beat the odds. Everything is pretty out in the open and they really just have to show up to film it, but it’s one hell of an engaging story.

The personalities on display are warm and oversized, particularly the almost Bill Walton-like Coach Rongen, brave and conflicted starting goaltender Nicky Salapu, and Jaiyah, a trans player who lives in a community who accepts her with open arms. Watching the team evolve from one that gets blown out in every match to one that other teams underestimate feels earned rather than forced thanks to a lack of embellishment outside of a few small editorial choices designed to keep the story moving along. Aside from a few characters and plot elements that are picked up and dropped (a visit from a sports psychologist, the team’s good natured, but ineffective prior coach), this is a solid film that should please and enthrall anyone who’s excited for the upcoming World Cup finals and those who could care less at the same time.

The Gender Matters series continues on Tuesday at 6:30 with comedian Chris Rock’s funny and poignant documentary Good Hair – a look inside the multi-billion dollar industry that has cropped up around hair care products for black people around the world – followed by a Q&A (moderated by Toronto Star film writer Linda Barnard) with Big Brother Canada host Arisa Cox.

The Lost Episode Festival returns to The Bloor this Saturday and Sunday for a special horror themed weekend, bringing with them a trio of Canadian theatrical premieres. Anna (Saturday at 3:00pm) comes from producer Jaume Collet-Serra (director of Non-Stop, Unknown, and Orphan) and stars Mark Strong, Brian Cox, and Tassia Farmiga in a taut and exciting chiller about a detective who can jump into the dreams of others to determine if someone is capable of committing a crime. The less successful, but still watchable Patrick (Saturday at 6:30pm) marks the fiction directorial debut of Australian documentarian and music video maven Mark Hartley (Not Quite Hollywood, Machete Maidens Unleashed, the upcoming look back at Cannon Films, Electric Boogaloo). It stars Charles Dance, Sharni Vinson, and Rachel Griffiths in the tale of a young nurse obsessed psychic man in a coma placed in opposition to a mad scientist type in a psychiatric ward. It’s strange and interesting at times, but not particularly terrifying. Then there’s Naked Zombie Girl (Saturday at 11:45), which I haven’t seen yet, but it’s a short that I’m sure does exactly what it says on the tin. That screens with bonus shorts and a Nerd Girl Burlesque performance. Then on Sunday at 2:30 there will be a screening of the films that competed in LEFT’s 50 Hour Film Challenge for over $14,000 in cash, prizes, goods, and services. Full details for the festival and tickets can be found on the LEFT website.