Goon (2012, Michael Dowse) – It shouldn’t be at all surprising that the highest grossing Canadian film thus far this year would be a hockey comedy, but what’s truly surprising is how excellent of an all around movie it is. More than just a great comedy, it’s also a sly social satire and love letter to a sport that’s gotten a bad reputation in the world over the years. Fully of laughs, emotion, and good will amid some particularly brutal fisticuffs Fubar creator Michael Dowse and co-writer and co-star Jay Baruchel have made a film that might be just a hair better than the similarly beloved Slap Shot and easily the best Canadian film of the year to date.

Doug Glatt (Seann William Scott) has been an embarrassment to his successful parents nearly his entire life. The Orangetown, Massachusetts native scrapes by on his job as a bouncer, and his only real friend (Baruchel) can only think about hockey all the time. After defending his friend from a potential assault from a player at a minor league game gone out of control, Doug gets a tryout with his hometown club, where his fighting skills eventually cause him to get called up to a Halifax farm team to act as the protector for a pretty-boy professional burn-out (Marc-Andre Grondin). Glatt energizes the team with his consistently sunny and positive outlook, despite only barely being able to play the game outside of taking a punch. As the team pulls itself out a slump and begins to make a push for the playoffs, it sets Glatt on a collision course with one of the best enforcers to play the game: Ross Rhea (Liev Schreiber), a disgraced former pro determined not to limp quietly into retirement.

Scott’s almost career defining performance in the lead helps to sell Doug as one of the most sympathetic thugs and toughs to ever grace the screen. He’s aided immensely by a game supporting cast that take character that could have easily been basic and they turn them into compelling creations that sports films and comedies rarely get. Even Alison Pill, as Doug’s on-again-off-again love interest, makes her smaller role into one that makes a lasting impression on the audience. A huge tip of the hat also goes to Dowse who shows a keen visual sense both on the ice and off. All around, it’s just a wonderful film in every way, even if there might be one or two fight sequences too many that drag the film on a bit.

The Blu-ray for the film also comes stacked with special features that will appeal to fans of the film and hockey enthusiasts. The commentary track from Dowse and Baruchel is an absolute gas to listen to, full of Canadian in-jokes and a light playful tone that’s informative without ever taking itself too seriously. Ditto the special “Power Play” viewing mode, which allows viewers to leave the movie at any time to branch out to raw B-roll from the production, behind the scenes footage, and interviews. They aren’t always exciting, but for people who want to see how many takes are required before Scott can put his fist through a car windshield its worth it. Also, you get to see Jay Baruchel give Don Carmody a bunch of crap while getting his character’s treadmarks shaved into his head while singing Vanilla Ice’s “Ninja Rap.” So there’s that.

There’s also boasts great picture quality and sound, 10 minutes of deleted scenes, a 5 minute blooper and outtake reel, an interview with Scott and Baruchel, fake hockey cards, a reel showing the goalie tryouts for the film, and an HDNET making of documentary. By Canadian movie standards (which often means no special features and subtitles if you’re lucky), this probably stands as one of the best Canadian Blu-ray releases, too. 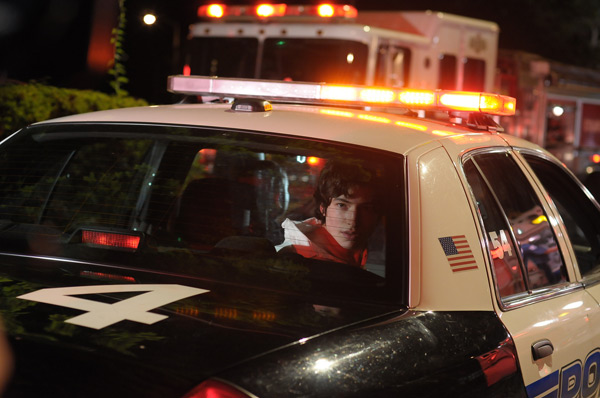 We Need to Talk About Kevin (2011, Lynne Ramsay) – It’s simultaneously mind-boggling and easy to see why director Lynne Ramsay’s We Need to Talk About Kevin was snubbed and shut out of so many potential accolades this awards season. Despite having a stellar lead performance from actress Tilda Swinton as a mother at the end of her wits, Ramsay’s film might be looked down upon as just another genre film with a high gloss. That’s sad, since it’s one of the best and most outright terrifying bits of familial horror from last year.

Swinton stars as Eva Khatchadourian, a broken down, gaunt looking mother of a monster. Her son Kevin (Ezra Miller) has been imprisoned and awaits trial for a heinous crime that he feels no remorse for. The film looks back at the events in Eva and Kevin’s lives that lead to the present, where Eva at times seems completely put off by the fact that her son ruined her life long dreams of travelling the world. Then again, Kevin (also played by Jasper Newell as a younger child) seems to be almost pure evil; cold, calculating, manipulative and uncaring. It doesn’t help that Kevin’s father (John C. Reilly) acts completely oblivious to anything potentially being wrong, and prefers to act more like a best friend to Kevin than an actual father.

When approached as a straight horror film, the true intent of Ramsay’s direction comes to light. This isn’t a film about HOW something happened, but rather how Eva remembers it happenings. This is the filmic equivalent of a truly terrifying waking nightmare and one of the most searing looks at PTSD ever witnessed. Swinton gives another strong performance in an already stacked career as Eva. A lot can be said about actors forgoing make-up and losing weight for a more “natural” appearance, but even in flashback sequences Swinton uses her looks and mannerisms to show just how taxed Eva feels before she realizes her son is crazy and he hates her. Miller and Newell also do great jobs of playing a purely evil little shit devoid of feeling. Their performances do belong up there with similar performances in The Bad Seed and The Omen films. John C. Reilly also turns in a pitch perfect performance because there are few people more adept at conveying someone as oblivious as Eva’s husband. It’s a great case of hiring the perfect person for the job.

The Blu-ray looks wonderful, bringing the vivid and abundant symbolic reds and greens of the film to life, but the sound feels slightly off with some louder moments almost peaking and crackling. The special features are few, but a 30 minute discussion with the cast and crew about the making of the film yields some great insights especially from Swinton and Reilly. A 17 minute sit down with Swinton (being interviewed at Telluride by programmer Hilton Als) doesn’t add too much to the actual film, but does let the viewer into the world of Swinton’s personal take on acting. There’s also a 4 minute bit of soundless raw B-roll from the film’s opening sequence and a sadly brief 4 minute talk with Lionel Shriver, writer of the novel the film was based on, when she was cornered leaving the BFC premiere of the film.

Rookie Blue, Season 2 (2011) – In case you haven’t guessed from this column, I watch more movies than I generally get a chance to watch television, but I like to catch up whenever a new show makes its way to DVD. I should be honest when I say that I never saw the first season of the Canadian produced and still popular south of the border police series Rookie Blue. I should also say that the involvement of the same production team as Grey’s Anatomy gave me room for pause. Thankfully, this show won me over pretty easily by being ten times the show that Grey’s is, blending the rotating beds and insecure rookies template to a really well drawn police procedural.

The Toronto set show has one major throughline about new beat cop Andy McNally (a wonderfully vulnerable and equally strong willed Missy Peregrym) and her own personal struggles adapting to being an officer and her conflicted personal life, but it also allows the supporting cast to make really strong impressions. The general standalone stories are also of a generally higher calibre than anything currently screening on most American Procedurals.

The four disc DVD set contains all 13 episodes from the show’s second season, seven making of featurettes, and some pretty neat split screen behind the scenes comparisons to the show. If you haven’t seen the show yet, it’s worth a look. You’ll probably be pleasantly surprised, even if the season finale is somewhat anti-climactic in several ways.