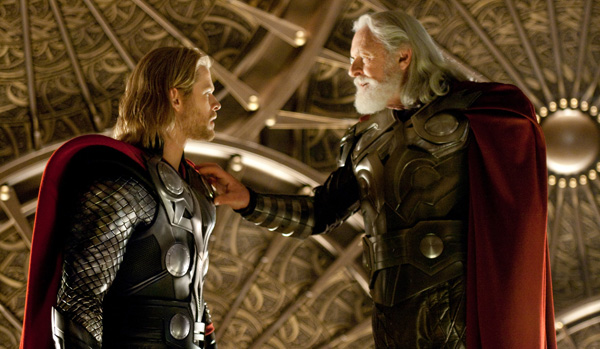 Marvel has released the first official trailer for Thor. The Kenneth Branagh directed action epic stars Chris Hemsworth as the titular Norse god of thunder, robbed of his power and cast down to Earth by his father Odin. The film also stars Anthony Hopkins as Odin, and Natalie Portman as his love interest, Jane Foster.

If you saw the Thor showreel that Marvel debuted at San Diego Comic Con then you’ve already seen much of what is contained in the trailer. While the visuals are stunning, we’re still having a hard time reconciling the huge tonal differences between Thor in the heavenly kingdom of Asgard and Thor stuck on Earth in small town America. The trailer makes Thor feel like two completely different movies, hopefully director Branagh will be able to successfully balance the finished product.

We’re still cautiously optimistic given the huge talent that is involved in the film. As long as Thor can stand on its own two feet as a film and avoid the “Avengers-setupitis” that plague Iron Man 2, Marvel fans should be in for a treat.

Thor thunders into theatres May 6th 2011.