A few weeks ago I picked up a Wii U, and it’s inspired a renewed wave of video game enthusiasm in my house. I haven’t had a Nintendo console since the glory days of the N64, and I’m realizing now that my gaming life had been missing the vital joyousness that Nintendo games are perfect at delivering.

I do the majority of my gaming on a desktop PC that runs current triple A games on medium to high settings, so my game diet has been dominated by action and horror games, on stories heavy with cerebral grandeur, or a grim sense of duty. The Wii U would let me play games that were otherwise inaccessible, and as I switched it on for the first time I didn’t fully realize that my palate was about to be dramatically cleansed. 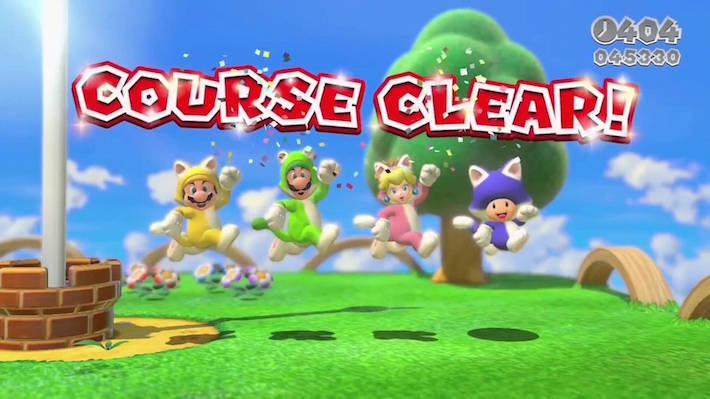 Everything about the Wii U is light, comforting and fun. The gamepad is a toy all on its own. It took me a while to wrap my head around it, but the first time I was in the middle of a Mario level and my wife came in to use the television, I just switched inputs on the TV and walked off with the gamepad, still playing. It was incredibly freeing.

But the games, rather than the slick technology, are at the core of my Nintendo experience. The two I’ve dug into are Super Mario 3D World and Mario Kart 8, each recent entries in classic franchises. In both cases the continuity between the games of my youth and these modern incarnations is immediately clear. I already knew how to drift around a corner in Mario Kart 8 because the basic mechanics are identical to what they were twenty years ago. There are a few new items and one or two driving tricks to learn, but for the most part it all came back quite naturally.

The transition to Super Mario 3D World is just as easy. Mario, Luigi, Toad and Peach, have the same jump styles as they did in Super Mario Bros. 2 on the NES, the power-ups are almost all familiar from previous titles, and once I got used to the fact that I can’t punch goombas like I did in Mario 64 I was perfectly at home with the game.

So if my delight with current Nintendo games is derived from the sense of continuity, am I just looking for self-indulgent nostalgia? That’s certainly a factor, but it’s the tone that has made the biggest impression. It seems obvious when you stop and think about it, but Nintendo wants you to play their games in the purest sense of the word, beyond the verb we habitually use to describe experiencing a video game. Playing a Nintendo game is to relax your need for meaning and poignancy. When Waluigi is racing a huge motorcycle with tiny orange wheels while throwing banana peels at princesses and humanoid mushrooms, there’s no room for deeper analysis. 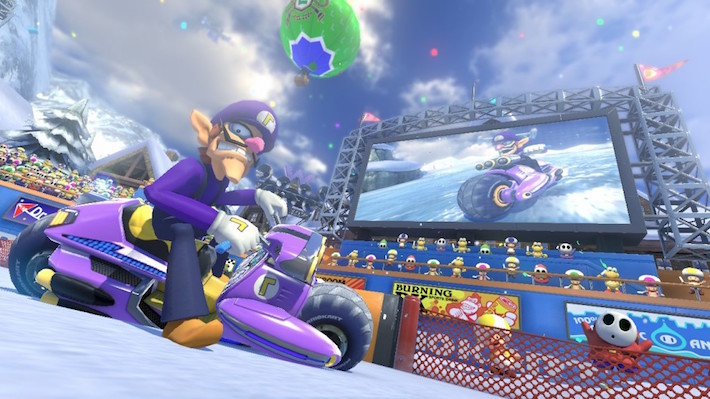 Recent PC games I’ve played, including Homefront, The Long Dark, and Telltale’s Game of Thrones, all seem to want to move me emotionally, to provoke me to introspection. Most games want the player enjoy the experience, but that does not always involve fun. Piecing together what has happened in Gone Home is fascinating, but it doesn’t feel much like Mario. Meanwhile, I can’t think of a better word than ‘fun’ to describe the cherry power-ups in Super Mario 3D World and controlling a pack of fireball throwing Luigis.

That certainly doesn’t mean that I’m going to ditch my library of serious and thoughtful PC games, especially since a complicated series of charts is needed to figure out which Wii U controllers are compatible with which Wii U games. But at this point I don’t want to have one without the other. Despite the controller compatibility issues, I appreciate the functional reliability of the Wii U, a sharp contrast from my experience with the Ouya, where new controllers often require a significant tweaking before they will work properly.

In September, Rebecca Watson of Skepchick wrote about the importance of genre diversity in games by comparing them to movie and TV genres. “I want Citizen Kane AND Pacific Rim,” she wrote, “True Detective AND America’s Next Top Model.” I want all of that in my games too, but my Wii U has helped me realize I will also require some DreamWorks and some Studio Ghibli. I had assumed that my tastes in games were progressing, moving towards more mature and weighty material. But what I’ve discovered is that my tastes were actually expanding to encompass that darker side without abandoning the ground I originally occupied. That starting ground is a place of pure play, and that remains Nintendo’s specialty.