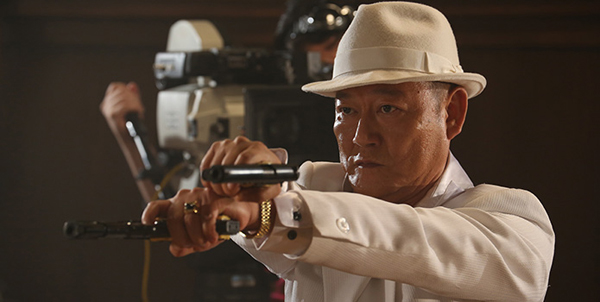 Why Don’t You Play in Hell?

Sono goes for broke with a film so gleefully deranged and delightfully nonsensical, but with far too much plot and character to keep things fun. At 127 minutes it could lose about 40 minutes of dead weight in the middle entirely at random and not change the outcome of the film’s story.

A sprawling cult epic in the making and another in a long line of films in the past few years decrying the death of cinema and 35mm film, Sono spins a multarc story based around two warring Yakuza families and how a group of amateur filmmakers who have never done anything with their lives or art (known as The Fuck Bombers) will exploit the rivalry and a doomed romance between a related teenage actress (and former commercial jingle spokesgirl as a child) and a nerd to make “a damn good movie.”

As a biting artistic statement about how traditional filmmaking has killed Japanese cinema, Sono hits the mark nicely, but he never seems to know when to cut. Some sequences just keep going on and on long after a point has been made and without adding anything new. It also tends to forget about the filmmaking crew for a long stretch, which is unwise since they’re the heart of the film. Still, the first 30 minutes and the extended grand finale (involving cocaine, rainbows, swords, and one of the most recognizable pieces of music ever created) will be worth it for adventurous viewers. (Andrew Parker)