Earnestness is not an easy thing to convey on screen. Too often it can tip over into twee or play out as pure parody. Though The Electrical life of Louis Wain doesn’t entirely escape the trap of the former, director Will Sharpe manages to quite successfully pull off the improbable: a genuinely whimsical and affecting look at the life of English turn-of-the-century artist Louis Wain.

For the uninitiated, Wain was a multi-hyphenate talent who gained fame largely for his many illustrations of ridiculously cute, and occasionally mischievous, anthropomorphized cats and kittens. Popular in the late 19th century and early 20th, the images are sure to be familiar to audiences far removed from their heyday, even though they’ve likely never heard of the man behind them. There are plenty of frankly fetching felines to be found in the film, enough to satisfy the pickiest of cat fanciers, but they are merely one aspect of the story. Director Sharpe aims to give a far more rounded look, thank goodness, into the life and mind of the man behind the artwork – a tragic figure forgotten by history who managed, despite his personal tragedies, to give joy to so many.

The film introduces us to Wain as he returns home from covering a country fare for the Illustrated London News, his hands overflowing with portfolios filled with sketches and invention schematics. He resides with his mother and five high-maintenance sisters, one so domineering you’d hardly blame Wain for seeking more out of town assignments (he doesn’t). He is the sole breadwinner for the family and they don’t let him forget it. Upon his return, he discovers the family has hired a governess, Emily Richardson (Claire Foy), to school his three youngest siblings. Initially appalled at the addition, he changes his mind upon meeting Miss Richardson and feels an instant (and seemingly mutual) attraction. His family is less than pleased at the attachment, hoping for a more advantageous, and prosperous, match which will set them up comfortably for life. Unfortunately for the sisters, and fortunately for us, Louis and Emily are far too in love to let anyone get in their way.

This is not Cumberbatch and Foy’s first time acting opposite each other, having played a couple in 2011’s Wreckers, and it shows. They have a rare kind of comfortable chemistry that makes their scenes together a joy to watch. It’s not hard to see how Louis and Emily could become so quickly devoted to each, as they manage to charm each other and the audience simultaneously. Unfortunately, the couple gets little to no time to settle into their picturesque cottage before illness casts a shadow over their domestic bliss and over the rest of Wain’s life. As Emily deals with the unthinkable, the newlyweds adopt a kitten named Peter to cheer her up and complete their family of three. We wouldn’t think twice of such a thing now, but at the turn of the century, having a cat as a pet was quite unusual. Cats were mousers. Cute yes, but primarily around for their ability to catch tiny and pesky rodents.

Both Peter and Wain’s sketches of Peter become a source of joy, a welcome distraction from the tragedy that awaits. The illustrations portray cats in a way they’ve never been seen and they captivate just about anyone who sees them. Emily goes so far as to say that Wain has captured the true nature of cats for the first time – that they are adorable, ridiculous, lonely, and brave. There is beauty in them, as with everything in the world. You only need to look. It’s clear Sharpe wants us to apply that to Louis as well, and we can see why. He’s a bit odd (his moments in the pool are some of the film’s funniest), somewhat naive, terribly bumbling, and seems oblivious to the social mores of the time, but he’s not without care or feeling. His fears are many and can be all consuming, but he tries just like everyone else.

Once the drawings are published by Louis’ friend, the editor of the Illustrated London News (Toby Jones), they are an immediate hit. Unfortunately, due to his naivety, Wain doesn’t benefit from their success as much as he should have and it leads to a downward spiral of familial, economic and mental upheaval. He faces blow after blow – including the death of two of his sisters – each set back pushing him further into his own mind. He spends much of his life, and the film, searching for a type of electricity, of vitality, essential to life as we know it. It’s hard not to feel as if, just as he gets close to finding that spark, life gets in the way. There are some lighthearted moments amid the dark, especially for cat lovers, but it’s hard to watch Wain’s demons slowly take hold until he finds himself in an asylum, forgotten by his family and the world he loves.

Cumberbatch plays each stage of Wain’s life with the agility and confidence we’ve come to expect from the actor. In fact, it’s fair to say we’ve seen him play all of Louis Wain’s notes before, but possibly not in one character and not with such vulnerability. Wain has a brilliant mind and the frenetic pace at which he functions is both impressive and familiar, but it’s his moments of calm, of quiet, that are the most telling and it’s in those moments that Cumberbatch particularly shines. There’s a particularly tragic moment mid-way through the film that so perfectly encapsulates the denial that comes alongside grief. It’s a stunningly acted moment that sticks with you long after the credits roll.

He’s supported by fine supporting performances all round, especially from Foy and Jones. Andrea Riseborough takes what could’ve been a one-note shrew of a woman and gives you glimpses of the fears that drive her. Olivia Colman, who previously collaborated with Sharpe on Channel 4’s Flowers, provides excellent and witty narration over top of the film and Nick Cave surprises with a cameo as Wain super-fan and supporter, H.G. Wells. 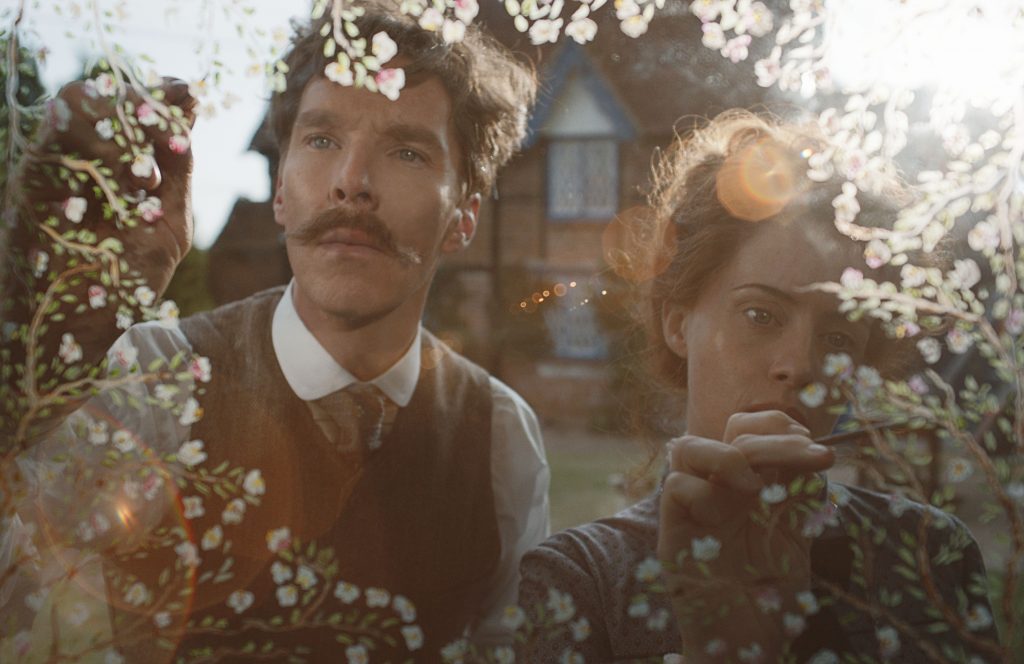 Sharpe and Simon Stephenson, his co-screenwriter, give every actor something sound to work with, occasionally venturing too far into quirk, but what really impresses throughout are the film’s visuals, notwithstanding the truly excellent abundance of cat art. To begin with, the film is shot in 4:3, a less-common ratio that effectively brings to mind picture frames and artist canvases. Sharpe and cinematographer Erik Alexander Wilson then make good use of lighting and fast-paced camera movement to help communicate the inner workings of Wain’s over-full mind. With the help of production designer Suzie Davies, his fears are given form and his inner chaos given life. It’s a beautiful film to look at, even at its darkest moments.

Though not life-changing cinema, The Electrical Life of Louis Wain is a supremely well-acted and colourful biopic that finds a way to spark something inside us all.

The Electrical Life of Louis Wain screens as a part of TIFF 2021, which runs from September 8 thru 18.

Follow That Shelf for our latest coverage including reviews, interviews and more, live from TIFF – and join in on the conversation on Twitter and Letterboxd.