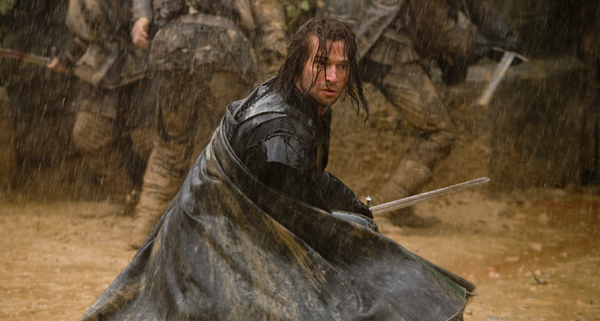 With only a few middle-of-the-road horror films to his name, Brit filmmaker Michael J. Bassett tackles sword and sorcery with his third directorial effort, Solomon Kane.  Adapted from the short stories and poems of Robert E. Howard (creator of Conan the Barbarian), Solomon Kane tells the tale of the eponymous 17th century mercenary and thief.  Solomon Kane is not a nice person, he’s a pirate who steals and kills as it suits him.  That is until he has a run in with the Reaper, sent by the Devil to collect Kane’s evil soul.  From that point forward he renounces his evil ways, devoting himself to a life of peace.  Unfortunately for him, the Devil will have his due.  Evil has a way of finding Solomon Kane no matter where he goes; he must fight it to redeem his soul.

James Purefoy, best known for his turn as Mark Antony on the HBO series Rome, plays the Puritan swordsman.  It’s not his fault, but Purefoy bears a strong resemblance to several other, more well known actors.  I kept thinking I was watching a Hugh Jackman movie, and had to remind myself that Purefoy is, in fact, not Jackman.  Make no mistake though, Purefoy is a very charismatic actor, however he isn’t really given much to do in the film.  As Lucas so aptly described Purefoy’s performance: “sneer, fight, pass out, heal, walk through rain or snow; repeat.”.  Add some contemplative brooding to the formula and you get the idea.  Purefoy can’t be blamed for this though, he does what he can with what he’s been given.  The only other actors of note in the film are the incredibly talented Pete Postlethwaite and Max von Sydow, but they only appear in a handful of scenes.  The two feel very underused, von Sydow particularly.

This is a very good looking film, the production design is absolutely top notch.  It’s obvious that a great deal of money was spent on the sets, props and costumes; it really helped to bring the fantasy world to life.  Bassett’s love for the Kane character comes through in spades, there is great attention given to the smallest detail.  The movie left me wanting to know more about the character, just so I could catch the numerous references to other things in the Kane universe.  That said, the film is not actually based on one particular Howard story, but rather pieced together by the production team from bits of Kane lore.  What hurts the movie is the fact that it’s an origin film, the story is almost entirely exposition.  I know Solomon Kane is a bad ass who kills evil people, I knew that before I even saw the movie.  In an effort to serve the reluctant warrior plot, Kane doesn’t kill a single baddie until nearly halfway through the film.  His origin is simply not something that should take an entire film.  Kane is meant to be a pulp fantasy hero; you’ve built an interesting universe for him, now dispense with the plot and get to the action!

Solomon Kane is an entertaining film, but it clearly wants to be better than it actually is.  For a character meant to be grounded in pulp mythology, Bassett plays it a little too straight at times.  A tongue-in-cheek approach may have been the way to go, he forgets that he’s making a sword and sorcery movie, not a high fantasy film.  The film would have been better if it poked some fun at itself and the genre.  All criticism aside, the filmmakers do a satisfactory job of establishing the character, and the rich and detailed world that Howard created for Kane is already there.  Solomon Kane is not a great film, in fact it’s just alright.  However, the film does one thing right: it sets the stage for what could be a very cool sequel.