With the embarrassment of riches being shown on Toronto’s multiple screens dedicated to repertory cinema, we decided it was high time to create a monthly guide for all of our local readers. Highlighting everything from the classic to the bizarre, from the backroom at Eyesore Cinema to the recently reopened Ontario Cinesphere, we’ve included dozens of screenings taking place all over the city. Find out which ones are FREE, which are 35mm prints, and which screenings are accompanied by special guests and other performances, from burlesque dancing and live bands, to the classic monthly shadowcast screening of Rocky Horror Picture Show.

Also be sure to check out some of these ongoing, extensive retrospectives at the TIFF Bell Lightbox:

1999: Movies at the Millennium

The annus mirabilis that brought us such essential films as Eyes Wide Shut, Fight Club, Being John Malkovich, and Magnolia also marked a moment when cinema changed how we saw the world.

The Ties That Bind: The Films of James Gray

The first TIFF Cinematheque retrospective of an American filmmaker whose fidelity to cinematic tradition has often placed him at odds with the movies of the moment. 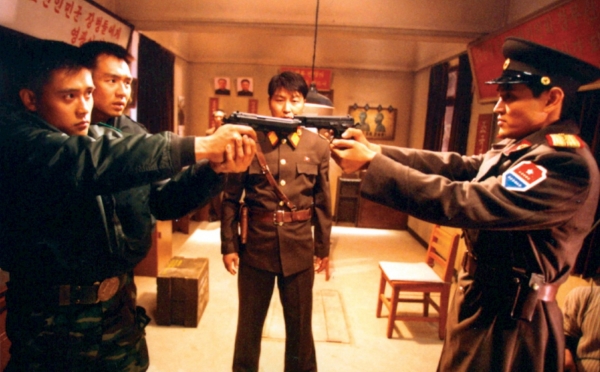 From the master auteur who changed your life with Oldboy and his vengeance trilogy, Eastern Promises is excited to present Park Chan Wook’s masterful and tragic political thriller, Joint Security Area, aka, J.S.A.

Ziggy Stardust and the Spiders from Mars (1973) @ Revue Cinema

Hale County This Morning, This Evening (2018) @ The Royal

Presented by Black Gold, a monthly film series dedicated to celebrating the best and most vibrant of Black screen icons from then ’til now.

Presented as part of the Up All Night series @ The Royal, a weekend of cult classics dedicated to the romance, calamity, and adrenaline-fueled hijinks of one-nighters.

A baby friendly screening  – house lights on, and volume not-too-loud.

On 35mm with live piano by Marilyn Lerner. Part of Silent Revue – Toronto’s only year-round dedicated selection of silent films in a theatrical venue.

Presented by the Ladies of Burlesque, featuring a burlesque performance by Hanna Dolly Bradley aka Dolly Monroe!

PROTOTYPE + a Selection of Recent Experimental 3D Shorts @ The Royal

MDFF presents PROTOTYPE, from local filmmaker and film critic Blake Williams, a work of speculative science fiction that takes its starting point from the 1900 hurricane that destroyed the town of Galveston, Texas.

Colin Geddes presents 10 of the most kick-ass kung-fu classics from the revered Hong Kong studio with Kung Fu Fridays: Fatal Fists and Crazy Kicks from the Shaw Brothers.

It’s the 60th anniversary of French New Wave auteur François Truffaut’s THE 400 BLOWS! Come celebrate in style with not one, but *two* slick digital restoration screenings of this landmark film.

Hosted and curated by local favourite and writer Crystal-Rose Madore, Throwback Cinema showcases the best of family and kid-friendly cinema from the 1970s-1990s, from blockbusters to cult classics.

Part of the This Film Should Be Played Loud series, see new, classic and rare music docs on the big screen.

Rue Morgue’s CineMacabre Movie Nights promise the best of classic and contemporary horror at The Royal Cinema – once a month, every month.

Emily Gagne and Danita Steinberg (hosts of What About Meryl?) are launching a podcast about women in film at the Revue Cinema. We Really Like Her! celebrates women in front of (and behind) the camera. Fun guests–like screenwriters, editors, directors, producers, film programmers and critics–will weigh in, too.

Colin Geddes presents 10 of the most kick-ass kung-fu classics from the revered Hong Kong studio with Kung Fu Fridays: Fatal Fists and Crazy Kicks from the Shaw Brothers.

As always, Hot Docs will be presenting the cult classic with Toronto’s own Shadow Cast who will be performing their own satirical, comedic version of the film for audiences during the show.

A special Drunken Cinema screening as chosen by the viewers!

A 40th anniversary screening of Hair paired with a beautiful restoration of Hal Ashby’s SHAMPOO!

Your ticket to this Food in Film screening includes slice of pizza courtesy Blondie’s Pizza.