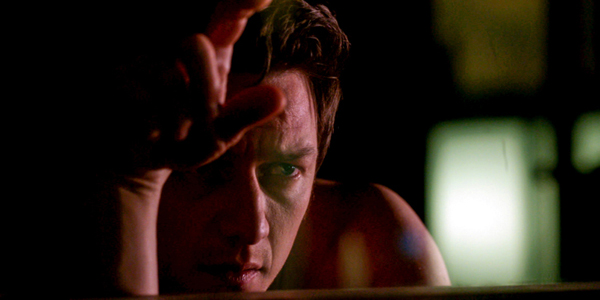 Those who were disappointed with the direction Steven Soderbergh took earlier this year with his supposedly last film Side Effects will probably be similarly perplexed and possibly put off by the latest effort from Slumdog Millionaire and 127 Hours director Danny Boyle. Instead of following in his recent spattering of prestigious awards fare, Trance goes so far back to the beginning of his career that it feels like a film that should have been made before his misanthropic crime masterpiece Shallow Grave. Or possibly even after. While it’s an unapologetically nasty piece of business that just wants to be as grimy as possibly, Trance is so sloppily misconceived overall that it feels more like a sophomore slump than the work of someone with a few Oscar nominations under his belt.

Simon (James McAvoy) works away in a London auction house while battling a crippling gambling addiction. As payback for helping to get him out of debt, he goes in with wealthy criminal Franck (Vincent Cassel) to help steal Goya’s painting Witches in the Air, which is world roughly 11.5 million pounds. Things go awry and Franck gunbutts Simon so hard that he forgets what he did with the painting. When strongarm tactics don’t cure his amnesia, an outside hypnotherapist (Rosario Dawson) is brought in to try and jog his memory.

There’s nothing particularly wrong with Boyle getting back to basics and making a film that kind of typifies the start of his career. It’s exactly what Soderbergh did with near perfect results in Side Effects, but this material seems beneath Boyle outside a slew of twists and “gotcha” moments. Based on a 2001 TV movie, Trance does mark the reunion of Boyle with Transpotting, Shallow Grave, and A Life Less Ordinary writer John Hodge, but he can’t bring too much to the table other than an ice cold sensibility.

The game afoot is thunderingly obvious from the second Dawson shows up on screen, and things weren’t that engaging prior to that. It’s not say that Boyle isn’t doing a good job or that most of the cast isn’t pulling their weight. It just feels so journeyman and unauthoratative that it could have been made by any dozen of hacks. They might not have had as great of a technical background, but it still would have been the same film in every conceivable aspect.

Dawson and Cassel are the real reasons that the film almost works, and both easily deliver the best moments. As the film goes on and her character’s motivations get more clearly defined, Dawson handles the film’s abrupt shift in tone with grace. She’s game to play along because it will become apparent that she really is the game. Don’t worry. That spoils nothing. Cassel lucks out by having the best written character in the film: a tough guy who can logically reason with you one second, beat you senseless the next, and then leave you alive long enough to find a diplomatic solution that you can probably live with.

McAvoy, on the other hand, is all wrong for this role. Maybe. Even the jury in my head is still out on this one. On the one hand, he’s doing a good enough job playing against type and he’s relishing the chance to play a scared and snivelling little shit that one would see in one of these more “classical” Boyle productions, but unlike Dawson, he can’t handle the film’s big reveal. When it comes time to make Simon the character he was always supposed to be, he drops the ball in a big way.

That big reveal that I keep talking about is the kind of twist that would barely fly in an early 90s direct-to-VHS erotic thriller, and it’s exactly the kind of thing that Boyle probably shouldn’t have touched in his career. The climax of the film is intriguing in concept, so dreadfully illogical and almost laughable in execution that it begins to feel like a parody of a potboiler that no one really asked for. It turns slimy, sleazy, and misanthropic almost on a dime, and while that’s a tone that Boyle can handle, it’s in service of terrible material here. It’s the ending that torpedoes the whole thing, raising more nagging questions than answers, but they aren’t even answers worth pursuing.

Also, for anyone who sees it, I really need to talk to someone about that whole bit with the flaming car at the end. You’ll know what I’m talking about when you do, and hopefully you’ll know while I’m still chuckling about it to myself weeks later.