3-D, Tanks, and Move Light Cycles on the PS3

Hey, you’ve heard about the new TRON movie Legacy, right? Of course you have! What about the video game, TRON: Evolution? Disney Interactive showcased the franchise at FanExpo this summer with a huge stage demonstrating the game for the PlayStation 3,Xbox 360 and Nintendo Wii versions, alongside action figures and other merchandise. I got to try out the newest build of the PlayStation 3 version amidst a handful of other guests at Disney’s Toronto headquarters, around the corner from a life-sized furry figure of Sully from Monsters, Inc.

By now you’ve probably seen some of the footage from the on-foot sections of the game, where you play as Anon, a program created by Kevin Flynn to figure out just what the heck is going on in the Game Grid. So let’s talk more about the light cycle sections!

The light cycle level we saw was mostly linear, as the player races through the metropolitan part of the Grid. The first thing you’ll notice is how fast everything moves, flying down the highways with a rickety motion-blur effect. There are more than Sunday drivers on this road; you’ll have to deal with enemy bikers looking to cut you off in a lethal manner with their light trails. Thankfully you’re able to throw discs at the riders to throw them off their path. That doesn’t stop the rest of the Recognizer armada from dropping bombs all over the place, searing the highways and toppling surrounding towers right in front of you. It might remind you of Half-Life 2, when you had to avoid the helicopter’s weapons while racing along the rivers on your air-boat. (I know I remember it, because I played it for the first time this week.)

The light cycle levels are also the only sections where you can use the PlayStation Move controller, held sideways not unlike the Wii Remote-as-NES controller setup. The Move steering was more sensitive than I had anticipated, and I was veering into the shoulders of the highways continuously until I got the hang of it. I wasn’t the only one derezzing all over the place, though, and these faster levels will probably have their fair share of Mega Man-like deaths and memory-based speed runs. But when you know the level and can zip past the exploding cityscape, it looks unlike anything else in modern gaming today; at least until Bioware adds something in Mass Effect that drives this fast. 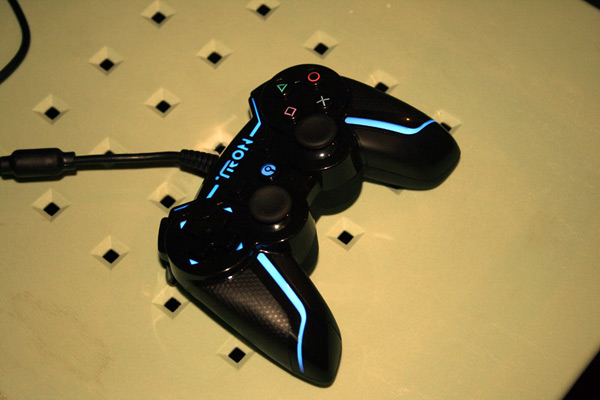 Speaking of controllers, we also get a hands-on of the TRON-branded PS3 controllers. It’s branded in black with totally awesome blue “piping” that glows in the dark. It’s also got a raised D-pad, some added grip on the handles and L2 and R2 triggers that sort of flip outward, making them easier to hit than the reference design Dual Shock. It’s incredibly slick and fits in with the TRON-branded controllers for Xbox 360 and the Wii, and the Razer keyboard for PC. An unfortunate contrast is the wired connection; you’re tethered to the Grid with this one.

In direct contrast to the light cycle sections, I also got a first glimpse at a section where you control a tank. I believe the official name for them is the “light tank,” but it’s hardly an accurate description. The tanks have undergone their expected makeover, and now look sleek and powerful at once – almost a combination of the Batmobile and a Warhammer 40,000 Eldar Grav Tank. 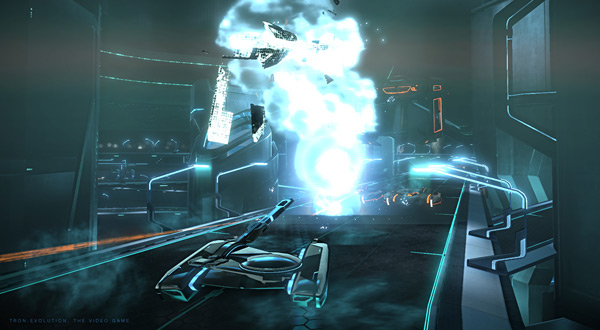 The tank sections I saw had you blasting away handfuls of enemy tanks and running over hapless enemy troopers. The cannon fires shells with formidable gravitas, each shot explodes in a blue conflagration, derezzing troopers and tanks with equal ease. There seems to be a combo scoring mechanism as well, giving you bonuses for blowing up enemy vehicles in succession. I can’t say I’ve racked up a ten-hit combo in an environment like this before.

The tank section was playable on the Sony 3-D Stereoscopic television. With a flick of the powered 3-D glasses, suddenly you’re staring down the barrel of your cannon with an army aiming their own guns at you. The additional effects weren’t as dramatic or pronounced as in some other games for the PlayStation 3, though (like Killzone 3, perhaps). The settings mainly add a depth-of-field to the towering citadels of the Grid, and give an airy feel to the highways you’re driving along – suddenly veering off track feels even more dangerous, as it’s a long drop down, indeed.

While the cycle and tank levels I saw followed a linear path (albeit with branching roads as some of them are destroyed along the way), both vehicles are usable in the online multiplayer modes. While I was talking to , game director of Propaganda Games and the overseer of the entire TRON video game gestalt, he mentioned that one of the most notable tweaks to the game in the last few months was the addition of the iconic 90-degree turns for the cycles.

“We use the Unreal Engine, and…it’s got very real-world physics, so you can imagine that travelling at 300 miles per hour on a light cycle creates unique problems when you turn at 90 degrees. So we had one of our engineers, who was very passionate about putting 90-degree turns into the game, worked all hours and that’s now in our multiplayer.” 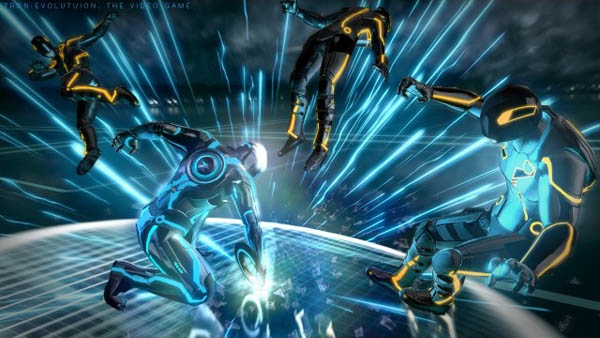 It’s worth noting that only the PlayStation 3 version of the game was playable at this event, to highlight the Move and 3D implementation. Aside from the possibly-too-sensitive steering on the light cycles for the Move, it all looks very impressive on the large and expensive televisions Disney had supplied for us. That’s not to downplay the Nintendo Wii version, subtitled Battle Grids, nor the DS version, which is different again from the console versions. Hedges calls it a “trans-media event” that incorporates every TRON property in the reborn IP.

“Each one of our games in our TRON: Evolution series tells a different tale in the TRON universe. Even from the graphic novel TRON: Betrayal tells the story before the video games. Everything feeds into the same universe, and it’s a continuous narrative. So as a TRON fan, you’re going to get the deepest, widest possible experience you can … But each one of them’s different, and then when you go and see TRON: Legacy on December 17th, you’re going to have a different storyline, but it feeds back into everything else that you’ve already seen. So from that perspective it’s really creating something that no other company has done to this date, to the best of my knowledge.”

After more than twenty-five years of near-hibernation, the slew of games to come along with a new feature film and graphic novel represents an absolute deluge of content. Whether all these disparate parts weave themselves together comfortably remains to be seen, but from the looks of it so far, the games should satisfy the trigger-fingers of long-time TRON fans when they launch across all platforms this December 7th.