There’s a feeling evoked in fiction that involves blackmail that borders on victim blaming, and it is used to teach us about living honestly. In “Black Maps and Motel Rooms,” the action packed penultimate episode of True Detective season two, this trope is deployed to highlight Paul Woodrugh’s biggest character flaw, his inability to live openly about who he is, and it gets him killed by Detective Kevin Burris. It’s one of the more dramatic blackmail parable endings, and while it is sufficient in the grand tradition of promoting honesty, it leaves one glaring question in mind: is there power in abandoning one’s life?

For Woodrugh’s war companion the initial comeuppance in the idea of Paul being blackmailed over a love life that they both recognize as false is clearly vindicating. He was right to berate him for living dishonestly and this situation is proof. If Paul was true to himself and his partner Emily, asserts the self righteous mercenary, Holloway wouldn’t have been able to force him into the Vinci tunnel system of doom.

But is Woodrugh’s blame warranted? Sure, it can’t be denied that the sexually repressed detective’s current state is partially a result of his infidelity, but the same can be said about his pursuit of the Ben Caspere investigation in every way possible. Woodrugh stole the documents Holloway wants hidden, he uncovered the leads regarding the blue diamond burglary and found out that Holloway signed off on Burris and Dixon’s blue diamond robbery case back when this whole Vinci City craziness kicked off. It’s not what Paul did that is causing this blackmail, it’s what Holloway wants.

That having been said, Holloway’s job would have been a lot more difficult if Woodrugh’s character was less assailable, and that can be achieved two ways. You can either live life in the open with no secrets or, like Ray Velcoro, you can welcome judgement.

Woodrugh is not capable of either option, and he’s not the only person facing this conundrum. Blackmail is a major aspect of the True Detective season two story. We learn through Bezzerides’ questioning of the newly rescued Vera that Ben Caspere’s favourite escort Tasha was blackmailing orgy goers (an act that earned her a visit to the torture cabin). We’re also reminded through a Vinci Gardens encounter that Frank and Ray’s longstanding professional relationship is based almost solely on blackmail. The greater thematic thread here is that the characters are all chained to their past. Like each of the protagonist’s personal traumas, the darker things that everyone in this show has done in their past holds significant sway over them.

Last week Ray Velcoro left everything he loved, promising his wife sole custody over his son Chad, and still Velcoro’s character is assaulted by invisible foes. Having been absolved of his major blackmail-able offense thanks to the apprehension of the man he thought he killed, Ray is nearly unassailable in terms of character. He has no skeletons left in his closet and has cut all his personal relationships out of his life.

Woodrugh, upon receiving his first blackmail sext, has both Emily and his mother Cynthia sequestered in a motel room until he can assure them that they are safe from family-breaking information. Bezzerides, with the help of her old partner Detective Elvis Ilinca, has her father and sister relocated to Eugene while laying low herself, dodging an APB on her head for killing an orgy guard last week. Velcoro, doesn’t worry too much about the long term ramifications in his scenario though. He offers one bit of worry concerning how Chad will take the news that his father is a wanted murder suspect and that’s all.

Velcoro  was a man who had a life, represented by countless model airplanes, and he left it all behind last week. Free of blackmail and the burden of personal happiness, he now identifies as a bad man. And therein is his true power: you can’t blackmail a person who has such a healthy relationship with the shittier parts of who he is.

Frank Semyon follows in Velcoro’s self-cleansing footsteps throughout “Black Maps” after learning the extent of Blake’s betrayal. The scene in which he confronts his head henchman is both brutal and enlightening. Thanks to the generous application of ultraviolence and some engaging blocking that sets a deliberate pace for the scene, Frank’s interrogation of Blake avoids becoming a straight up exposition dump by means of sheer magnetism. It also doesn’t hurt that the quality of the information spouting from  Blake’s bleeding face is so great.

Blake admits to killing Stan and giving up the wrong guy to Velcoro’s vengeance. He explains that Osip Argonov has bought the liens on Semyon’s clubs and is aiming to replace him in the rail corridor deal while emphasising that no one knows who killed Caspere (which is important because this season’s plot has gotten about as unforgivingly convoluted as TV gets). Frank kills Blake by the end of their conversation and then sets about dealing with his Osip problem.

His strategy is the same as Ray’s was last week, only writ large on the city he once had a stake in. He arranges for Jordan to go to Venezuela, asks the cafe owners he’s exploiting for fake passports, two clean cars and a grocery list of weapons, and then breaks all his metaphorical toy planes. After giving Osip a false taste of subservience, Frank sets the Vinci Gardens a flame before heading to the Luxe and doing the same. 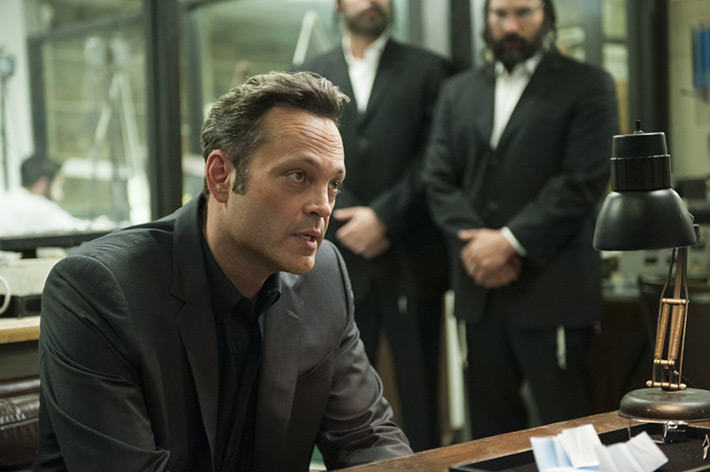 Semyon stands atop a building at night, looking down on Vinci as his assets burn. True Detective is filled with characters staring into the abyss, and this is the most sublime of those void-gazing moments. All of Frank’s talk of papier mache worlds is made reality as he tears down the superficial facade with which he used to identify himself.

Going into the final chapter of True Detective’s divisive second season, our three remaining heroes are stripped nearly down to their cores, having distanced themselves as far as possible from the only things they care about. It is an effective message about the power of personal sacrifice, but hidden in there is also a lesson about love.

Try as our remaining heroes might, it’s not possible to truly sever their bonds with others. Ray still cares about his reputation with his son, Frank still has his pride and loving wife, and Bezzerides has her father and sister. The true key to immunity from their invisible enemies is to welcome judgement, but that is most strongly supported through love and trust. If Paul had a connection with Emily like Frank has with Jordan, Ani has with Elliot, or even Ray has with his ex-wife, he might still be alive. Though they are all imperfect relationships, they each have at their core a love that allows for forgiveness. The key to surviving blackmail is not to wish that you lived your life differently, it’s having someone important to you that can say, “It doesn’t matter.”

I Want To See Your Lights Go Out – Anybody out there think there’s any possibility that Woodrugh is still alive? We certainly saw the exit wound of the first shot and it looks like Burris got him in the head the second time he pulled the trigger.

The Sweet Indifference Some Call Love – The movie Emily and Cynthia watch in the motel room is Splendor in the Grass. It’s all about sexual repression and the terrible things it makes people do. It should be no surprise that it’s one of Paul’s favourite films.

The Story’s Told With Facts and Lies – One of the main complaints I read about this season is that it’s boring, but this episode more than anything proved that important pieces have been moving since episode one. The actual mystery in season two is orders of magnitude more complex than the badass ballad of Rust and Marty, to a point where the show’s demand to catch every detail can seem exhausting. It makes me wonder if this iteration of True Detective would have benefit more from a binge-watchable schedule. It seems like Nic Pizzolatto is more interested in making televised novellas than traditional TV series.

Truth That Lives and Truth That Dies – You all will have noticed by now that, despite the epic scope of the Vinci City mystery, I have focused primarily on the themes and motifs of True Detective rather than the clues and minutiae surrounding the Ben Caspere case. Part of that is because I care way more about the show’s larger messages than I do the plot, but another is because I have a strong suspicion the mystery will end once again in an anti-climax.

Nevermind – That having been said, how do you think the whole show is going to work out? Will all the answers be out in the open? Will our heroes light up a star in the night sky? Do you think you know who killed Caspere?

Personally, I’m kind of intrigued by the possibility that next week’s finale won’t solve the case. It certainly would be on brand for the show.