Use Your Words is a new tabletop-like party game made for a digital audience. In that regard, it’s a clever little diversion. The game plays like a combination of Mad Libs and Apples to Apples in which players provide their own answers to various prompts before voting for the one they like the best. You receive points if another player chooses your answer (no, you can’t vote for your own). You lose points if you vote for one of the pre-written House Decoy answers that the game throws into the mix.

That’s pretty much it. It’s a lot like one of a dozen other games that you’ve played while sitting around the kitchen table, with the notable caveat that it’s a video game rather than a pen-and-paper game or a card game. You type in answers on a smartphone (or some other internet-connected device) while the game takes on all of the housekeeping responsibilities that go along with physical games. You don’t need to worry about setup, rules, or keeping score. You just need to make it to the title screen and then Use Your Words takes care of the rest. If you’ve ever played one of the the Jackbox Games, you should have a good sense of what to expect.

Fortunately, Use Your Words makes good use of the extra technology. The game requires very little investment, which might seem like faint praise but is in fact one of its greatest strengths. Use Your Words is designed as a casual social experience. The developers at Smiling Buddha Games know that many (if not most) participants will be playing with at least one drink in hand, and the game wisely chooses to meet them on those terms. The tone is breezy and lighthearted – the entire thing is dressed up like a 1960s game show – and never demands that you take anything too seriously.

As for the game itself, Use Your Words is comprised of four different mini-games. “Blank-o-Matic” is a standard fill in the blank. “Extra, Extra” asks you to create a newspaper headline to go along with an unusual stock image. In “Sub the Title,” you have to provide the subtitle for an out-of-context clip from an obscure foreign language film. Finally, “Survey Says” is a lightning round in which you have to come up with three quick answers to three quick prompts. In each case, the game seamlessly drops each answer into the clip (or newspaper) that inspired it.

If you can’t think of an answer, you can use a House Decoy. That’s the other major feature that sets Use Your Words apart from its competitors. It’s difficult to be funny on command. The House Decoy removes that pressure, which ends up making the game more enjoyable for everyone because the comedy doesn’t feel forced. Many of the House Decoys are hilarious, so there’s no guarantee that players will be able to spot them. It gives everyone a chance to win, and that makes the game more welcoming for all players, not just the self-styled comedians.

There is a slight learning curve. During our first round, the pace suffered because one player left the game. It was only later that we realized that we could clear inactive players and that the game would stop waiting for them to type in answers. There were a few other minor hiccups – the kind you’d expect from spotty Wi-Fi – but for the most part the game played well and everything went off without a hitch. A full game only takes about half an hour, and the pace is excellent once you get comfortable. You probably won’t play Use Your Words for hours at a time, but it is a fun way to kick off (or conclude) an evening with friends. 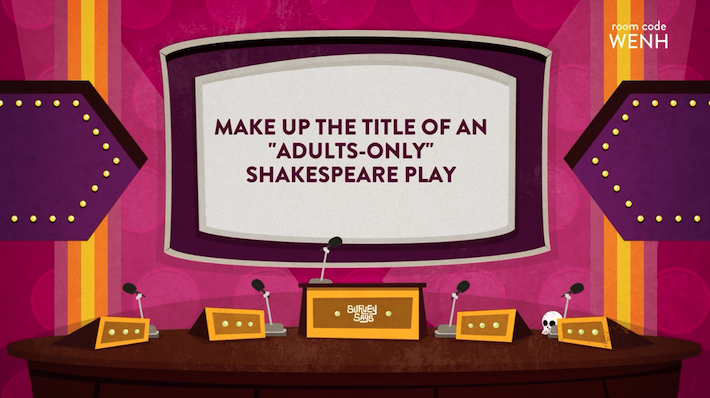 Use Your Words is ultimately the kind of social game that doesn’t require your full attention. If anything, it’s probably more enjoyable with a beer and another conversation happening in the background. Taken on those terms, the streamlined design is efficient and accessible, with no busywork to distract you from the bizarre movie clips and silly headlines. We had fun playing it, and I know I’ll have even more fun when I get the opportunity to play again.

That’s really all that matters. Use Your Words is not necessarily a main event, but it is effective social lubricant with a sound understanding of social game design mechanics. It’s always good to have a game like that on hand when it’s time to throw a party.

Use Your Words is now available for PS4, Xbox One, Wii U, and Steam. Check out our podcast with developer Julian Spillane to find out more about the game.

Next Article »
The Shelf Ep 11 - Use Your Words