Sega has released a new war game. War has always been very popular theme in video games, which makes sense since guns and killing things are also very popular in games. Halo, Call of Duty, Gears of War and Battlefield have found a comfortable niche with their typically melodramatic takes on all sorts of conflict. From the box art alone, Vanquish looks an awful lot like it’s trying to add yet another ‘androidgynous’ protagonist to the pile, which is kind of funny. In fact, the creators of Vanquish quickly and intentionally cross the line from serious to silly. Platinum Games, who have already flexed their tongue-in-cheek muscles a few times with MadWorld and Bayonetta, make a war game that is as absurd as they come. It’s a comfortable harmony of gun blazing action and severe robot casualties. Slap that open palm with some intensely solid design and it’s time to break out the Kentucky bourbon — glug, glug bitches.

It’s the future, an era chock full of amazing technology and bad ideas. The United States, led by a Hilary Clinton modeled mannequin, has started a space colony orbiting around the planet. Not a shabby idea, right? Well, for some reason this revolving metropolis has also been outfitted with a microwave laser, and this is where the worst-case-scenario machine begins to turn. Russia has been overthrown by a military coup, and to make matters even weirder this new red revolution is led by an army of robots called the Order of the Russian Star. Victor Zaitsev, leader of the Star, hijacks the satellite colony and uses its laser to fry all of San Francisco — he’s kind of an asshole like that. You play as Sam, a product tester for the US government agency DARPA, currently outfitted with a super pimped out combat suit that lets him augment time and slide rapidly across the floor like Springsteen at the Super Bowl. Some bureaucrat decided that stopping evil Russian robots from destroying America would be a perfect opportunity to see if this super-suit is as effective as it is slick.

So yes, the story is pretty goofy. I would not call it captivating, never mind the driving force, but amongst the dribble there are a handful of decent plot twists. Twists driven by either somewhat predictable backroom deals or other characters revealing their dickish personal agendas in the final act. The story is neither throw-away or offensive, but most importantly it’s non-intrusive.

While the story may not be functioning at a university level, the game’s design and mechanics are total Mensa. The game challenges the notion that all action games must revolve around context triggered events and meandering story stepping stones. Vanquish is structured around action so intense that you’ll be sort of surprised that it’s even possible for a human brain to actively process. Vanquish will let you pull off stunts so blisteringly insane that you will kind of wish you had someone else’s faraway perspective to watch yourself do them. You’ll charge into a lion’s den of enemies just to hijack their turret and ravage those who don’t run fast enough. You will slow down time, glide across the floor firing rounds madly from your assault rifle as you swoop under a massive enemy’s legs to get at the weak spot on his back. You will have firefights in a transit tube where gravity doesn’t give a shit and trains use whichever surface of the tunnel they feel like. You will snipe precise pot shots at robots who seem to really think they had you. So what does it take to make a game like this?

This is going to sound like a weird thing to have a crush on but I’m kind of in love with the weapon upgrade system. Most games will either have you focus on using a gun excessively to mount up experience points, others will have you ambitiously looting to purchase essentially useless upgrades. Vanquish has created a system that is as strategic as it is forgiving. There is a universal ‘upgrade’ item that will upgrade any weapon that you are currently using, and typically appears after defeating enemies in intense situations, but there is another more casual method. Instead of purchasing weapon upgrades like bigger clips or faster reloads, you get points towards upgrading simply by picking up extra weapons of the same type. If your ammo isn’t full, picking up a weapon will just restore your ammo. But if the clip in your assault rifle is full, and you pick up an assault rifle from a fallen foe, you’ll receive a bonus. This is a great way to ensure that your arsenal is casually upgraded. It seems like a weird thing to praise, but this weapon upgrade system illustrates the competency of Platinum Studios.

For the most part the weapons are fairly standard. The guns that shoot fast are the assault rifle and mini-gun, one more accurate than the other — I’ll let you guess which one. There is also the stock sniper weapon and rocket launcher, but then you have this saw-blade gun. Yes, we’ve seen saw blade guns before, but this one shoots discs that bounce and hover around a space like sentient frisbees, and when encountering larger foes you can lop off limbs or use it like a chain saw to slice them in half — though be careful as this tends to make them more angry than weak. 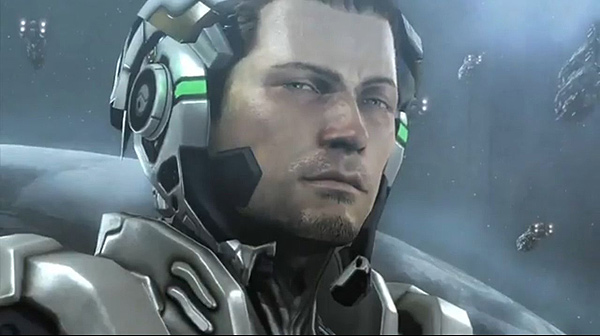 Although it’s true that Sam looks an awful lot like your average video game space marine, after spending some time with him he’ll start to appear more like a futuristic samurai. Blowing up these meddling robots is really satisfying, as bullets riddle their metal bodies there’s a good feeling of damage being done as shrapnel spatters about the screen. While the super sleek “technotropolis” backdrop isn’t the most original video game setting, Vanquish does have the courtesy to leave the on the lights. The game must take place on the bright side of the moon, as every detail is intensely illuminated like a god was messing with the camera exposure. As a result, the immense destruction that you create is crystal clear. Equally impressive is the sense of scale: because the space station is one gargantuan tube, you can expect to get that jumpy little thrill like the first time you looked up in Halo. While a lot of the levels look the same, variety is kept on the menu consistently with different scenarios constantly thrown at you. The space-bound utopia can seem generic at first, but unravels into a puzzle box of surprises. Enemy types are also greatly varied, the way that the game introduces new enemy types means that you will constantly need to adapt your strategy.

Vanquish will probably catch you a bit off guard. Initial appearances might give it a generic action bullet blaster feel, but it’s more intelligently designed than some of the genre’s more shallow entries. There are flaws: some guns are more bark than bite, there’s no multiplayer and your suit overheats faster than the game ends, but these are small sprinkles of dandruff on an otherwise very handsome package. If you’re willing to get over yourself and give Vanquish a shot, you won’t regret it. Hell, consider it a lesson in humility.