No movie franchise has ever dominated Hollywood like the Marvel Cinematic Universe. That’s a grand statement, I know, but the numbers speak for themselves.

Earlier this year, the MCU made the leap to the small screen, dropping a string of successful TV shows centred on its big screen characters. WandaVision, The Falcon and the Winter Soldier, and Loki pleased viewers by sticking to the MCU formula. These shows keep on unspooling the MCU’s long-running narrative threads while delivering mind-blowing action sequences. After 13 years and two dozen movies, the Marvel brand is still going strong, but now its time for the franchise to step outside of its comfort zone.

I don’t want to go back to the era when Spider-Man and the Incredible Hulk didn’t exist in the same universe. However, the MCU limited the type of stories it can tell by placing all of its films in a shared universe.

Entries in the MCU are individual puzzle pieces contributing to a much larger picture. This means each film’s characters, plot, and tone must connect with the stories that came before it as well as what’s coming down the line. This constraint keeps the MCU from developing an out-of-left-field flick like Spider-Man: Into the Spider-Verse. But what if the MCU threw caution to the wind and produced brain-melting original stories that changed everything you know about your favourite Marvel heroes and villains?

Disney+’s new animated streaming series What If…? puts a brand-new spin on the MCU. Based on the long-running comic book series of the same name, What If…? is a mind-bending anthology series with shades of The Twilight Zone and The Outer Limits. Each episode sees the mysterious alien being known as The Watcher (Jeffrey Wright) take viewers to an alternate dimension where events from the movies play out in strange new ways.

What If? comics gave writers a chance to let their freak flags fly. The beauty of the comic book series is that you never know where each issue may take you. You could pick up a bonkers issue like What If Wolverine was Lord of the Vampires? And honestly, who wouldn’t lose their mind discovering that issue on the comic book rack? But what I loved the most about What If? comics was how the writers weren’t afraid to take fan-favourite characters to some dark places. I still remember the bummed-out feeling I had after reading a downer issue titled What If the X-Men died on their first mission?

Series creator and head writer A.C. Bradley and director Bryan Andrews take the new What If…? to some wild places. As strange as the show gets, the duo tie each episode (so far) to an MCU film. One episode asks what if Peggy Carter (Hayley Atwell) took the super soldier serum instead of Steve Rogers. It plays out like a Coles Notes version of 2011’s Captain America: The First Avenger, but with a female lead.

Another episode blows up the Guardians of the Galaxy origin story to reveal what would happen if Yondu’s (Michael Rooker) henchmen snatched prince T’Challa (Chadwick Boseman) instead of Peter Quill. What If…?’s storytelling possibilities are endless. 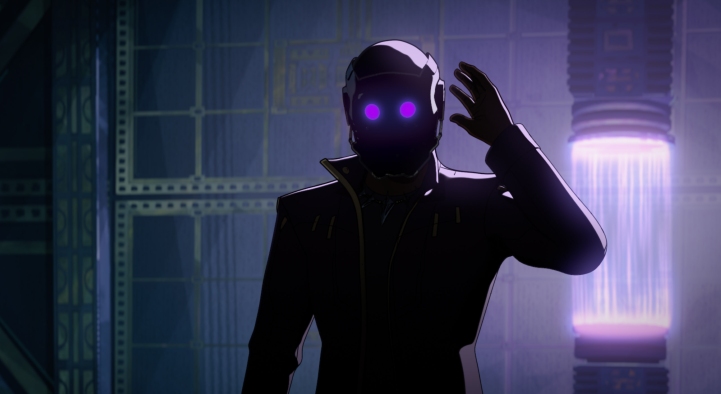 I’m betting that everything I’m telling you right now sounds either incredible or nonsensical, which speaks to what does and does not work about this series. This program works best if you’ve watched most of the Marvel movies. What If…? expects you’re familiar with these characters and their convoluted backstories. Each 30-minute episode blows through its plot at Mach 10 and rarely slows down to let newbies get up to speed.

If you’re not already onboard the MCU train, these stories won’t mean much to you. That’s not to say each episode isn’t thrilling or well-written. It’ just that episodes emphasize plot over character development – we’ve been with these characters for 13 years, after all. You can still follow along If you don’t know who Yondu or Thanos (Josh Brolin) are, but half the fun comes from seeing these established characters through a new lens.

Over 50 MCU cast members reprise their big screen roles in What If…? including Samuel L. Jackson, Benedict Cumberbatch, Don Cheadle, Mark Ruffalo, and Michael B. Jordan, just to name a few. These MCU characters are now so iconic that it’s apparent when someone’s voice doesn’t match their big screen counterpart. However, most replacement voice actors sound close enough to original star that it won’t take you out of the experience. 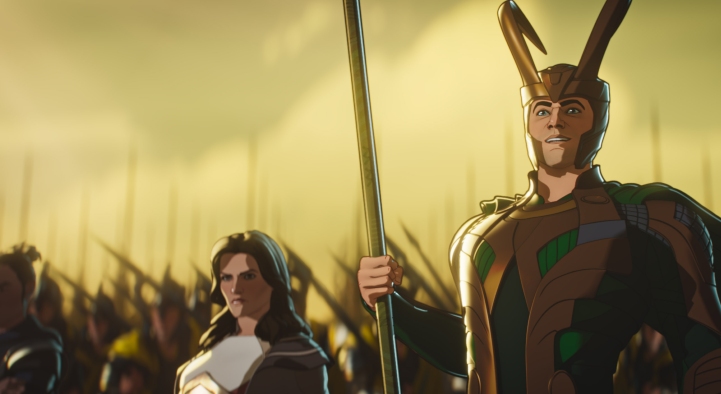 Heading into 2021, Marvel had a lot of films and TV series on its packed release slate. As much as I’m dying to see Chloé Zhao’s take on Eternals, What If…? is the year’s most intriguing Marvel release by far. So, I’m thrilled to say I’ve loved every single minute of this magnificent new series. What If…?’s T’Challa/Star-Lord episode is one of the most enjoyable episodes of TV I’ve seen all year. Don’t be shocked when this episode causes a Twitter meltdown after it airs.

What If…? is the most promising new Marvel releases of 2021. Marvel Studios finally gave the MCU the official comic book treatment by taking their beloved characters beyond the limits of the cinematic universe’s established canon.

If you’ve never experienced a What If? comic get ready to have your mind blown. This beautifully animated new series features loads of action, a dope voice cast, and an outstanding premise. What’s not to love?

Move over Doctor Strange, What If…? just kicked off the MCU’s multiverse of madness.