On a very special episode of Highly Logical – A Star Trek Podcast, hosts Angelo Muredda and Nicole Partyka had the opportunity to speak with Star Trek: Deep Space Nine star Andrew Robinson about the new retrospective documentary What We Left Behind: Looking Back at Star Trek: Deep Space Nine, his character Elim Garak, Cardassian sexuality, Doctor Bashir, the lack of irony in Star Trek, and more!

Be sure to listen to the full episode of Highly Logical here, which also includes conversations with DS9 showrunner Ira Steven Behr and star Nana Visitor (Kira Nerys).

Nicole: My first question for you is this meta thing I’ve been thinking about. I’ve read A Stitch In Time, the book about Garak, which you yourself wrote with no ghost writer —

Andrew Robinson: No ghost writer. And I appreciate and I’m impressed that you read it!

Nicole: I thought it was very good and I found a lot of the talk about the masks Cardassians wear to be very interesting. It reminds me of the conversation in the documentary over whether Garak is gay. Did this idea of Garak’s masks influence his closeted status?

Robinson: Well, I’ll tell you how that came about. I never thought of it in a binary way, that he’s either gay or straight. Because when I first got the job to play Garak, I didn’t know what a Cardassian was. I knew it was an alien race, and they were not humans. I was trying to find choices to make that went towards the alien nature of of the character. When I was introduced in that first episode in the first season, and I was seeming to get involved in a relationship with Doctor Bashir, I wondered what’s the attraction here. Why am I getting involved with this young man? Is it just as a spy, to get information from him about the Federation and so forth? And it was partly that. But that’s playable up to a certain point. I’m talking as an actor here, looking for a stronger action to play. And I thought alright, so what’s what’s the sexuality of a Cardassian? And I decided it’s not about being straight or gay, or bi. It’s about being omnisexual. That basically his sexuality is something that can happen with anyone. And there’s Doctor Bashir, being played by Alexander Siddig, who’s a good looking young man, and I thought, it’s sexual attraction that brings him to Doctor Bashir as well as the subterfuge of being a spy.

Nicole: In the film, Ira says that he wished Garak had came out as a gay Cardassian – or maybe as an omnisexual Cardassian. That didn’t end up happening, and he never was explicit about those feelings, and it was left for a lot of us on the Internet in the Star Trek is Gay group to be excited about and read between the lines about [laughs].

Robinson: I wish they had followed up on that too, Nicole. I think the times are the times. And also I think that perhaps the Star Trek universe, especially in the ’90s, was maybe a more conservative place even though it’s dealing with the future. As it’s turned out and as we’re seeing now, sexuality evolves. And perhaps the evolution of sexuality is the guiding force behind evolution and we should have been more sexually liberated, especially when we’re talking about things that happen in the future. But as I say, the times are the times. 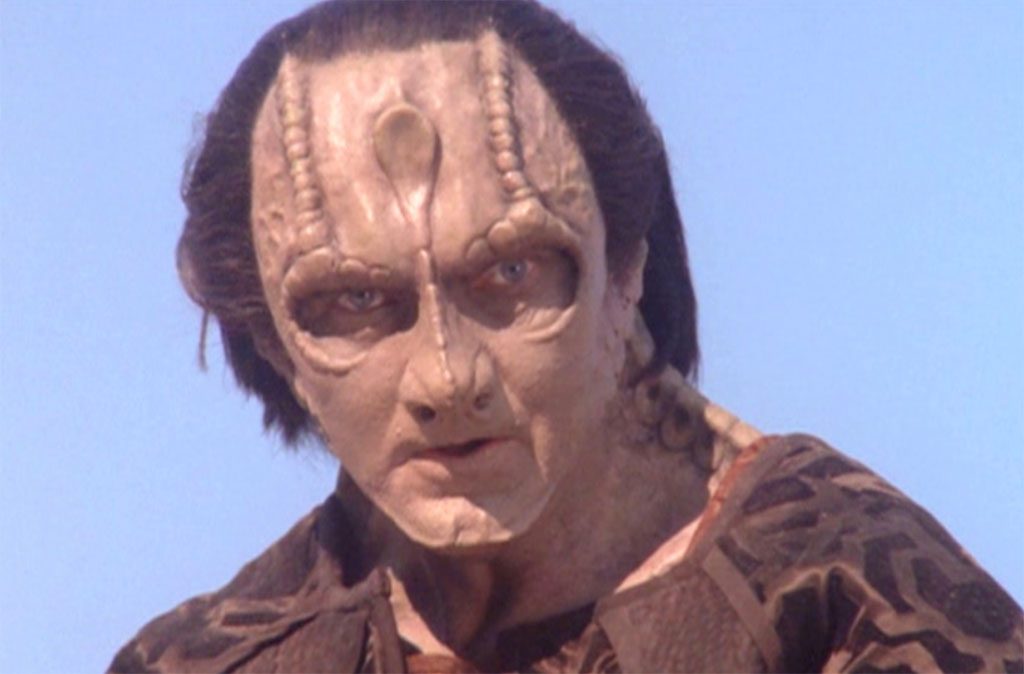 Nicole: How did it feel to play that, when it became apparent that your character wasn’t going to come out? Did it feel like you were still playing that but that maybe Garak was a bit deeper in the closet?

Robinson: I never thought about it as him being in the closet. I thought about it as though he’s in this conservative place: the Federation is less evolved sexually, and he just had to live with that. But I never let that idea go, and I think that that helped just increase the mystery of the man. When I first started acting back in the ’60s, it was very brave if you were working in a repertory theatre in Milwaukee or Cincinnati to be an openly gay actor. That was such an act of courage and I was amazed at their courage. But for the most part they had to be in the closet, and that also added to a certain kind of mystery about them. It’s very complicated. Even now I think we are only just beginning to liberate ourselves.

Angelo: I was wondering if we could talk about the the legacy of Garak and the legacy of the show, which to me seems to be kind of bound up with each other. DS9 now is seen by a lot of fans as the most morally complex Star Trek, and Garak is sort of the greatest example of that: a character who is always playing things so close to his chest, who does not always reveal his intentions. What you make of that? Is it a challenge or a great opportunity to play a character whose motivations are not so obviously spelled out?

Robinson: It’s the best. It is both a challenge and a great opportunity. You’re absolutely right I think that the moral ambivalence, the greyness – and I don’t mean dullness – of Garak is what Deep Space Nine was. It’s the idea that we’re more complicated. Morality is ambiguous. Sometimes we do things that are not clearly moral or immoral, ethical or unethical. I think for instance of episodes like “In the Pale Moonlight,” where Garak, by Federation standards, achieves an end through questionable means, as emblematic of that. That’s one of the reasons why it surprised me, as Ira said in the film, that Garak’s popularity has grown. I was glad to hear that and I started thinking about that. And I realized people are becoming more aware of how morally ambiguous this world is and how complicated it is. That’s why I think we’re still talking about Deep Space Nine and the character of Garak.

Angelo: Following from what you’re saying about greyness and ambivalence, it seems to me that Star Trek – at least outside of fan communities – is sometimes seen as a bit dour, a bit self-serious. But Garak is an outlier there. He has a certain panache about him. He has a sense of camp. He’s also an outsider figure in terms of like how he fits into the station – not a Starfleet officer, not a human, not a Bajoran. He’s a tailor and a spy. What’s the appeal for you of playing a character who is so distinct from his surroundings?

Robinson: Yes. And for all the reasons that we were talking about: his sexuality, but also his sense of irony. You don’t see a lot of irony in Star Trek, but here you have a character that comes from irony, who has a subtext that’s completely different from what he’s saying, so that you you are never on sure footing with him. I’ve spent a lot of time in in Europe and my wife is French, and one of the complaints that Europeans make about Americans is that they have no sense of irony. And I thought about that in playing Garak. Garak does have that panache that you mentioned. His humour is very different, and the writers wrote beautifully in that vein, with his quips and his one liners. But it’s about the morality of it — our definitions of what is good and bad. The line often gets blurred, and I know that that makes a lot of fans uneasy. But in terms of playing a character like that, it’s a gift, and Garak was a gift for me as an actor.

Nicole: If, as as Ira suggested, Garak had come out of the closet, do you have any idea how that would have changed his character’s trajectory? Would he be a bit more forthcoming or would he still keep everything close? How would his relationship with Bashir have changed?

Robinson: I’m sure if they had him come out of of the closet then he would have found a partner. You noticed that they tried to hook Garak up with a woman and that never works! [Laughs]  I mean that was a disaster. I really tried to think in a non-binary way about this, in a more inclusive way, which is where we are going evolutionarily, I think. There will come a time I think when we will not have these classifications. There will come a time when it will just be a matter of is there attraction or is there not attraction. And there will be no censorious judgment about our behaviour. But that’s still in the future — perhaps that’s one of the places where Star Trek can go. [laughs]

This interview has been condensed for clarity and length.

What We Left Behind: Looking Back at Star Trek: Deep Space Nine lands in theatres across the United States and Canada for one night only on May 13. Find a screening near you here.