On a very special episode of Highly Logical – A Star Trek Podcast, hosts Angelo Muredda and Nicole Partyka had the opportunity to speak with Star Trek: Deep Space Nine star Nana Visitor about the new retrospective documentary What We Left Behind: Looking Back at Star Trek: Deep Space Nine, the evolution of Kira Nerys, working with Avery Brooks, dealing with the arrival of Michael Dorn’s Worf, bringing “The Duke” to her character, and more!

Be sure to listen to the full episode of Highly Logical here, which also includes conversations with DS9 showrunner Ira Steven Behr and co-star Andrew Robinson (Garak).

Angelo: I wanted to start off with something you say early in the film about how you first encountered this character. You talk about how one of the things that you immediately liked about Kira was that on the page, she didn’t read like a woman – there was a kind of swagger to her that wasn’t there in other women characters you had read. Could you talk a bit more about meeting Kira?

Nana Visitor: At the time when it was pilot season I would load my car up with clothes because I would have maybe five different auditions for five different pilots. Mostly my clothes were such that either I would be a mouse, which meant I was going to get killed probably, or I would be a vamp, and that most likely meant that I was the murderer. Or I was a mom, or I was a bimbo — I played a lot of bimbos, believe it or not. When my hair was light blonde I’d get the bimbo roles, and those were fun for a while too because at least they were characters. So that’s what I was auditioning for and then here came this script, and it didn’t read like a woman.

But really, I need to say, it’s more that it didn’t read like a woman that was portrayed in television at the time. So it was this huge opportunity to run with something that was really pushing the envelope.

Nicole: Kira was so inspiring to so many women because she’s a fully fleshed out character who wasn’t taking shit from men on the show, and who was in a commanding leadership role. I wonder if that experience of playing Kira stayed with you, and if she was an inspiration to you as well?

Visitor: Absolutely, all the way along. Sometimes I influenced Kira, and sometimes Kira influenced me into examining parts of myself, where my beliefs play into what Kira was confronted with. The self-examination and looking at my integrity and morality and how I felt about what Kira – who had a different integrity and morality – was going through expanded me, no doubt. 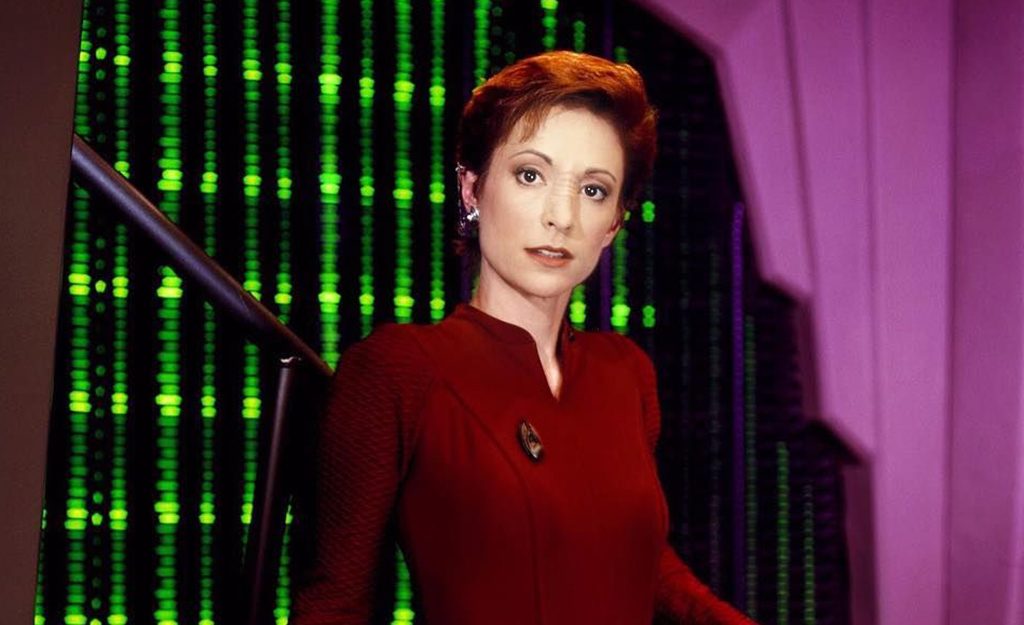 Angelo: In the film both you and Ira speak about how DS9 was rare in allowing its audience and other characters to sympathize with a character who you might either call a freedom fighter or a terrorist. That might have been difficult to get away with after 9/11, as Ira points out. How do you think Kira holds up now, given how rare it still is to see a character who’s a political agitator but also a respected member of the cast and crew, and who is in a leadership position throughout the series and who ends up in a major stewardship role, managing the station when we leave her?

Visitor: I think I could write a thesis on this subject. It’s a huge subject. Just in terms of character it’s huge that she had this arc. The way I look at it now, she definitely had post-traumatic stress. I never add the “disorder” part because I heard a Marine one time say it’s a completely normal reaction to horrific human events. I agree with that, and she had it. She was at war.

I remember being on the the lot at Paramount and they did a makeup test and did my nose and I had time to waste, so I went walking around on the lot.  No one was really aware of the show on the lot yet or what I was playing, and I got a lot of double takes and a lot of looks of “What’s wrong with her?” And it was so informative to me. I immediately got this attitude of “Why are you looking at me like I’m different? I’m not. I’ve just got a thing on my nose, that’s all.” That informed me right off the bat about Kira. And then I had to flip that, which I  had to do all the time with her, thinking that okay, people are having racist ideas about me, Cardassians are obviously racist against me, but then in “Duet” we examine the fact that Kira’s a racist, that she sees a Cardassian face and has all these thoughts about it. To take this veneer of toughness, which always has fear underneath, and to and take her through to the end of the series, where that toughness becomes true strength and true resilience, it’s just a great great character arc.

Nicole: I wonder if you could touch on how Kira has to go through this transformation of feeling so much hate toward Carsassians, but eventually Ghemor becomes like her surrogate father and she has all this affection for him. What can we learn from Kira and her trajectory?

Visitor: We can say that that no matter how painful it is, stay and figure it out. That the suffering comes from thinking that things can’t change and that things can’t evolve. Yes, things are painful, but you don’t have to suffer. I think that’s what you can take away. And that you can learn that violence is not as effective as putting down arms and having a conversation.

Nicole: Kira starts out guns blazing and by the end she’s a peaceful diplomatic figure.

Visitor: It’s all through the understanding of the other character in “Duet.” And by the way, during filming for that show, I had Kira dreams, of being in a Cardassian camp, and the fear, the nightmare, the panic of trying to get out without being caught. Your body doesn’t know the difference between you and your character. All I do is an actor is put a set of thoughts in my head to live by. And then I live. My body’s reacting as if it were real. It’s real to me. It may not be true, but it’s real. I experienced a lot of Kira’s momentary trauma at the time.

Nicole: That reminds me of something you mentioned in the film about the episode “Far Beyond the Stars.” You talk about how Avery Brooks was so entrenched in the role in this incredible episode that he also directed. What was shooting that episode with Avery Books like?

Visitor: First of all, Avery was an amazing director and he brought collaboration but also a huge point of view. It was like going to church. It was important. It meant something when he was on the set directing, and to see the importance of this episode to him just made you wanna go, “Yeah, what do you want from me? Can I do more? How can I support this?” It’s the most fun kind of acting there is and it’s also edgy acting because it it’s not safe. Where he went isn’t a safe place at all, and that’s thrilling and scary.

Angelo: Going back to something that you said earlier about the importance of change and evolution, I wonder if you could talk a bit about the addition of Michael Dorn and Worf to the cast for season four. You mention that you were sort of worried at the time that Kira might be relegated to serving coffee for Sisko and his new number one, which is not a strange thing to wonder about given that shows have struggled to reorient themselves around new cast members. I’m curious about what you make of how Kira fared after the introduction of Worf?

Visitor: I remember when Michael Piller left the show and I was I was at a party with him and I said “Michael, I’m terrified. I feel like you are my character’s keeper. You keep me safe in being able to be uncontained.” I felt like he held the space open for my character to be the way she was. He told me no, Ira Steven Behr is going to always keep Kira safe in that way.

I did feel pressure at times. I got told that I walked like John Wayne when I walked down the Promenade. Which, you know, in later years when that was looked at, we discovered that he actually had a kind of feminine walk, when you think about it. But I got criticized for the way I walked and I said, “If you don’t want me to walk like that you have to hobble me. Don’t put me in flat boots — put me in heels and I’ll walk differently.” I was a dancer, so I knew that what I wore would change the way I was. And it did. My hair softened and these things happened to try to make that better, and it worried me, and I thought, “Okay, now here we go. I’m going to be the typical female.” And I thought wait a minute, I’ve got something to do with that. Wear the clothes, wear the hair, but don’t let it affect you. Be who you are still. Don’t let the clothes wear you.

So that was part of  Michael Dorn coming in because it was part of trying to include more people into the audience. I don’t think I was hurt. I think I found new ways of doing things, and new places to be in. It was good. It was another problem to have to overcome. And then Michael Dorn arriving just meant that I had this great friend who, to this day, I have over for dinner. We had these epic Sunday dinners that Michael always came to and it was a wonderful friendship and still is. He’s one of my favourite people to hang with. So it just became another friend and it didn’t affect me the way I feared.

Nicole: It seems like the cast and the crew, like the characters, are close and pushed through a lot of obstacles to get to their mission.

Visitor: That’s very true. We were very tight. To this day conventions are a huge opportunity to catch up and to play together. Michael Dorn and I were both just outside of Pennsylvania and had the most fun dinners. I haven’t laughed so hard in a long time. It was hard to leave this show. It was very hard for those seven years to end.

This interview has been condensed for clarity and length.

What We Left Behind: Looking Back at Star Trek: Deep Space Nine lands in theatres across the United States and Canada for one night only on May 13. Find a screening near you here.