“You’ve got to put your body into it.”

In an interview about her then-upcoming sci-fi series following a group of women stuck in the prison system, Kelly Sue DeConnick talked about meeting civil rights leader Representative John Lewis. In a discussion about how armchair activism just isn’t enough, Lewis told her that she had to put her whole body into instigating positive change. Those words have been stuck in my head ever since I began anticipating another incredible comic created by one of my favorite writers in the business. Now that the first issue has officially dropped, I can see just how much DeConnick has already put her body into it.

Hopefully you’ve all read it by now, but for those who haven’t, I’m here tell you all about the Good Word: “non-compliant.”

Bitch Planet is a new monthly series written by Kelly Sue DeConnick (Pretty Deadly, Captain Marvel), with art by Valentine De Landro (X-Factor, Marvel Knights) and published by Image Comics. It’s set in a distant, dystopian future, where some of the worst aspects of our modern society both past and present are celebrated as the standard. Women who refuse to fit into “traditional” gender roles are labeled as “non-compliant” and sent to live the rest of their days on an off-world prison planet as convicted criminals. Some inmates may be there for committing real crimes in the eyes of our legal system, such as theft or murder. Others simply end up incarcerated because they dare to live a life free of submission to arbitrariness. Too fat. Too opinionated. Too something. The real crime, in the end, is being a woman at all.

The very first page opens up to a scene of a woman running through the street against a background of strategically-placed advertisements, all promoting varying degrees of unattainable perfection that perfectly illustrate the tone of the world DeConnick is sculpting. Women unwilling to reach for these societal breadcrumbs are considered pariahs, unable to fit in the way they were “meant” to as submissive, subservient things men seek to possess. On the next two pages you see a roster of, in true sci-fi fashion, women in tubes being shipped off to their new prison home. Their offenses range from being overweight to political activism to murder. According to the disembodied voice narrating their trip off-world, they are all beyond help and must be cast out of society to keep their non-compliant “sickness” quarantined.

That is your introduction to Bitch Planet, and it’s all you need to internalize going forward. 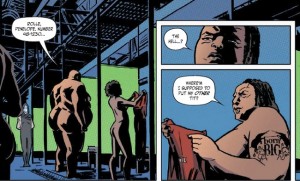 While only one issue in, this comic already illustrates so well how gender, race and class inequalities outside the penal system become even more concentrated and pronounced once inside. DeConnick talks about how she was originally inspired by women in prison films of the 1960s and ’70s, which are largely notorious for the exploitative, sexualized abuse of inmates advertised as “progressive” despite the fact that the cruel treatment was deliberately depicted as titillating. Those dated tropes immediately turn on their heads; there is absolutely nothing arousing about the violence in this first issue. There are multiple panels of female prisoners completely naked, some being physically beaten by the faceless prison guards. At no point do these scenes come off as provocative or sexy. It’s brutal, unapologetic and completely refreshing. Tasteful, but sans any sugarcoating. Cris Peter’s colors also complement both the art style and the story perfectly, with lots of blue and red tones that make me feel like I’m inside a cheesy science fiction movie.

De Landro’s art is appropriately rough and diverse. No one universal body type exists in Bitch Planet, even among the non-criminals. All of the female prisoners are drawn realistically – complete with rolls, cellulite and no thigh gaps – and their curves aren’t airbrushed. Dawn, one of the only white women featured in the first issue, is characterized as the perfect picture of compliance, and so she is drawn that way. Then we have Penny Rolle on the opposite side of the spectrum. She physically embodies everything deemed “non-compliant,” and she isn’t ashamed or shy about it. Penny Rolle is the punch-in-your-face feminism Bitch Planet seeks to land.

While comics, for the most part, are meant to be a tool for escapism, it’s important to acknowledge the real-world issues already glaringly apparent in DeConnick’s narrative. In Silja J.A. Talvi’s Women Behind Bars: The Crisis of Women in the U.S. Prison System, the author reports that by 2004, the number of women in state or federal prison had increased to more than 111,000. The percentage only goes up from there every year, at double the rate for men. One has to wonder why that is, but I feel I’m already finding some answers just within the context of this new series. Reading about a fictional world where women are imprisoned for being women, while living in one where anti-abortion and feticide laws can criminalize pregnant women for trying to have some say in their own bodies or for having a miscarriage… it suddenly becomes a concept much easier to buy.

In a remarkable essay in the back of Bitch Planet‘s first issue, writer and editor Danielle Henderson points out that Black women are also imprisoned at three times the rate of white women. Now take that 111,000, compare it to the roughly 201,000 that it is now in 2014 and factor in how many of those female prisoners are not white.

You do the math.

Because the standard of beauty disproportionately favors white women, DeConnick’s narrative includes more Black female prisoners than white; if for no reason other than simply not fitting into society’s narrow aesthetic (once again, “non-compliant” behavior). The same inequality can be – and often is – applied to women (and men) of color in the world we currently live in. Henderson illustrates this point perfectly in the Bitch Planet back matter:

“The striking thing about Bitch Planet is that we’re already on it. We don’t have to get thrown on a shuttle to be judged non-compliant – be a little overweight, talk too loud, have an opinion on the Internet – or be a woman of color.”

Other than presenting a legitimate discussion about racism as it applies to the prison system, DeConnick expresses her desire to make this a comic about exploitation without being exploitative. I think she’s already succeeded admirably. Her writing is as bold, honest and confrontational as De Landro’s art that refuses to cater to the voyeuristic tendencies of women in prison tropes. They put it all right in front of you. You can’t look away when the truth starts to make you uncomfortable. Issues inherent to inside and outside the prison system are uniquely addressed, where the ‘one size fits all’ mentality that dominates female body image in society doesn’t leave room for a woman’s breasts. The idea of men easily trading in one wife for a more compliant one comes off as disturbingly viable in this dystopian future that doesn’t actually seem all that farfetched. You know, minus the off-world prison planet part.

This isn’t just the feminist comic we’ve all been waiting for. This is the awakening.

Next Article »
The Long Dark: No Zombies Allowed