Adam Carolla explores the racing legacy of one of the greatest Hollywood actors of all time, Paul Newman, in his documentary Winning: The Racing Life of Paul Newman.

Paul Newman is known for many things. Obviously his brilliant acting career is foremost in our minds, but we also associate him with his lifelong friendship with actor and director Robert Redford, his immense charity work, and, who can forget, his range of salad dressings, Newman’s Own. But it may come as a surprise that Newman was also a world-class race car driver. And he didn’t just dabble in the way that Paris Hilton was a “singer”- he worked at it, and achieved great success on the track, winning several titles and coming in second at the sport’s most iconic race, Le Mans. Carolla, the comedian, writer and actor best known perhaps for his stint on The Man Show, and for his comedic political commentary on a range of shows, is also a bit of a gearhead, and collects Newman’s old cars. Undoubtedly this inspired him to make the film. Carolla tells the story of Newman’s racing career, following it from his early teenage interest in cars, until his retirement from races in his mid-80s. The film splices together archival footage with interviews from other car aficionados, like Jay Leno, friends Robert Wagner and Redford, and fellow racers, including Mario Andretti. We learn, ultimately, that it was racing, not acting, which was Newman’s true passion, and that this is the legacy he wanted to leave the world, and how he wanted to be identified. 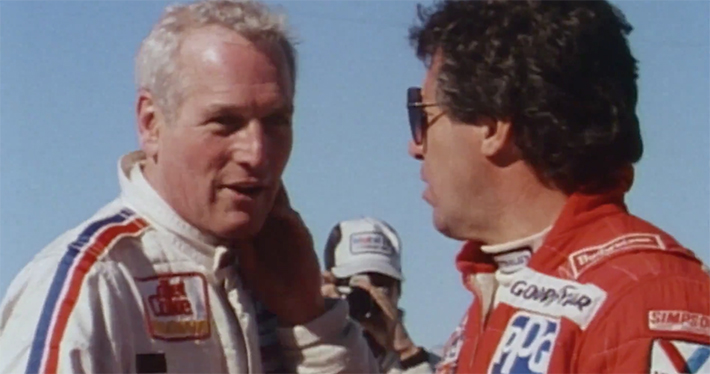 Knowing Carolla’s work, I wasn’t expecting a lot out of this. Sure, he’s hilarious, but a man who can deliver a well-placed fart joke does not an excellent documentarian make. Which makes it all the more pleasantly surprising that Winning is actually a fascinating and well-made film. There isn’t anything innovative here in his approach, but the exploration of a side of a famous man that we haven’t seen before is fascinating. The film is incredibly personal, with insightful interviews from his friends and those who raced with him. We gradually get a picture of the man himself- a rarity for someone who famously shunned the limelight and publicity. It’s easy to conjure up an idea of Paul Newman from his many great films- Cool Hand Luke, The Color of Money, The Sting, Butch Cassidy and the Sundance Kid, Road to Perdition, just to name a few. A stoic man’s man, but approachable and down-to-earth. It’s all the more fascinating when we recognize that he was this same person in real life; a normal man uncomfortable with his fame, for whom racing was an escape from the lights of Hollywood. We see a laid-back guy who liked cracking off-colour jokes, who blended into the crowd of mechanics and drivers by never putting on airs or pretensions. His greatest joys were found when people recognized him as a great racer, not as a blockbuster star. It is a fascinating side of Newman, and is explored with emotion, candour and deep respect. The ultimate goal of a biographical documentary should be to tell us something new about a subject, and Carolla exceeds in this regard.

If I have one criticism of the film, it would be the flow. The film jumps around quite a bit, from theme to theme, seemingly disjointed. It’s a bit jumbled, as though it was made by someone with many ideas but no distinct direction for putting them together. The choppiness of it made it difficult to follow a chronology, and though there is a loose direction, the film sidetracks too frequently to make following it very easy. Carolla needs some further time in the editing room to hone his craft, but he’s off to a good start.

You don’t have to enjoy racing or Newman to like the movie. Though I’m definitely a Newman fan, Carolla doesn’t assume you know everything about the man, and he gives you enough information to gain a primer on Newman. The same goes with racing. Though Carolla is clearly knowledgable about racing, he doesn’t assume you know as much as he does, but the film doesn’t talk down or condescend either. The takeaways are far more universal; everyone needs that outlet away from their day job, but what happens when that becomes your true passion? The tug-of-war between acting and racing was clearly an issue for Newman, and this struggle is borne out nicely by Carolla. But the film could easily have been about other hobbies, like writing or painting. Newman is portrayed so well as an everyman, that it’s easy to insert yourself into his position. It’s very entertaining, informative, fascinating, and an excellent early feature from Carolla.