“I See Darkness” is the aptly titled tenth episode of what has been a sophomore season filled with tremendous twists and turns. The aforementioned darkness is both literal and figurative with a lover’s wish casting a spell of epic proportions.

Wynonna visits her faceless friend Mercedes in the hospital where one can only wonder what kind of life she’s expected to lead. The normally quip laden Wynonna is decidedly more stoic and serious, although she does go for the jokes about her belly being about to pop.

“Trying not to think about the reasons, just the retribution.” — Wynonna “Surprisingly Serious” Earp

After smooching with Revenant Rosita and narrowly escaping being Tucker’s personal plaything, Waverly goes to Haught’s house to kiss and make up. Haught’s presently taking in some company with the face lifting Mercedes grilling Haught for the location of the final seal, and Waverly breaks things up with a very impressive stick fighting action.

Although that’s not enough to keep her from getting pinned down, and in an effort to save her GF, Haught is bitten by the venomous vixen. The evil spirit realized Haught is telling the truth that she does not know the location of the third seal, but she’ll be back as her demon husband promised the person who knows the whereabouts will soon return, and will be associated with the law.

The laws of the fatal injury are clearly laid out for Waverly once she has a brainstorm session with Wynonna, Dolls, and Jeremy who deduce via the unfortunate demise of Juan Carlo that the bite is a fatal poison no modern medicine can cure. Jeremy is usually the punching bag when it comes to the group of demonic hunters, and he is explicitly insensitive to the fact Waverly’s girlfriend is dying, but instead of being told to keep his trap shut, Waverly is surprisingly kind to him. It’s a very tender moment.

“Can we all just act like we’re winning for a chance?” — Waverly “Once A Cheerleader Always A Cheerleader” Earp

Waverly will do anything to save her love, and whilst the crew is working on an anti-venom, she is approached by the Beth impersonator who promises to save her love in exchange for the seal. At first Waverly says no, but we can see her mind working overtime on whether or not this might be a good idea.

The Cards You’ve Been Dealt

“This just keeps getting worse and worse.” — Xavier “Eeyore” Dolls

Doc engages in a drunken game of poker with a Revenant named Stevie, but is roused from his (losing) game when Wynonna recruits him to help with the case. Speaking of a raw hand, Wynonna is none too pleased when she is informed by Waverly that Doc’s special friend Rosita is in fact a Revenant — you know a demon she is cursed with sending back to hell.

Wynonna makes a deal with Rosie. She will send her back to hell last if she uses her body as a guinea pig to test the effects of the sisters’ venom. Under duress, Rosita complies. I wonder how Wynonna is going to react when she realizes her own sister is half Revenant…

“I am gonna milk that bitch like a snake.” — Wynonna “Good With The Visuals” Earp

The douche brothers over at “The Order” incinerated Juan Carlos’ body so the crew won’t be able to get any scientific evidence from there. Although they do gift Dolls the magic plate (powers TBA).

Calamity Jane is a great name for a cat, but the feline namesake might be more an omen for one Sheriff Nedley. He’s kidnapped from Haught’s house when he goes to grab the kitty by the Mercedes witch and taken to an abandoned barn where he is tortured for the location of the final seal. But that ol’law man ain’t giving up any information too quick.

“You think this is my first demon rodeo? We actually had a demon rodeo.” — Sheriff “Funnier Than You Remembered” Nedley

Waverly is tortured by the fact she might lose her one true love. To throw some more issues into the mix a doctor shows up at Nicole’s bedside. However, this physician is not here to treat Haught, but is her next of kin, aka HER WIFE. The woman claims it was a Las Vegas quickie marriage and there’s no love between them any longer. NEW CAST MEMBER ANYONE? ‘Cause if we know anything about Wynonna, the Ghost Triangle loves a good love triangle. 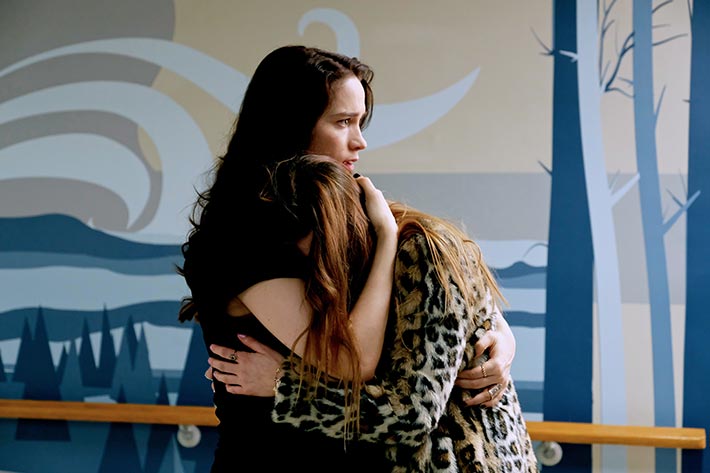 Waverly doesn’t think it’s fair for Wynonna to pressure Rosita into being a test subject and neither does Dolls. He uses his own special form to be test upon and guess what IT WORKS! Happy ending right?

“I will never love anyone the way I have loved you.” —Nicole “You’re Killing Me” Haught

The road to hell is paved with good intentions and in this case also includes a pact with an Iron Witch. The registered nurse/sister of the murdered sorceress from season one  makes a deal with Waverly that she will do anything the woman wants in exchange for the thing that will cure Haught.

It’s a dirty trick, with Waverly’s path leading her to the seal, which apparently the genius Sheriff thought best to hide in a fucking coffee mug on his desk. So Waverly does have to make the deal with Beth after all that fucking goddamn work.

Why wouldn’t she wait for her sister to save the day? It might be because since getting her DNA results, Waverly no longer feels quite like and Earp, compounded by the fact she had JUST kissed another woman after sending Haught a fairly nasty text. It’s not like her girlfriend dying of phantom’s venom ever had an ideal time, but this was definitely not it.

After making literally the worst deal ever in the history of deals, Waverly owes the Iron Witch a favour (who ever makes an IOU deal with a witch?) we are returned to the cursed trophy the witch makes a wish upon (remember she will have to pay that freaky guy her guts in like 10 years).

Her wish vanquishes Wynonna from existence and sends Doc back down the well.

Usually when I write about television I take it on as my job to think critically about the motivations and possible outcomes of plot and characterizations, but literally, WHAT THE FUCK IS EVEN HAPPENING?

Out On Ghost River

WhyNoNa? – It’s going to be super interesting to see how this plot line plays out, I wonder if the showrunners will do an alternative title sequences given that Wynonna is now literally vanished into thin air.