Your Highness Review - That Shelf Skip to main content 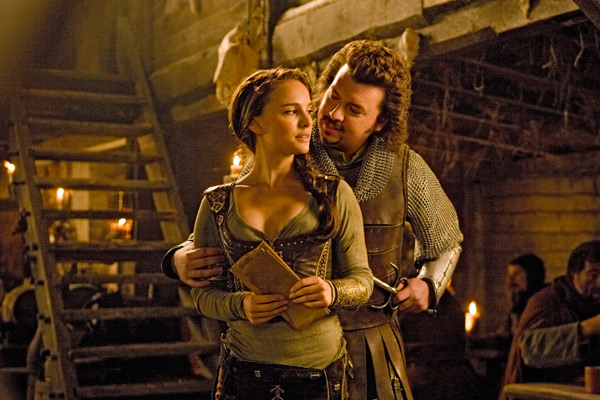 I didn’t walk into Your Highness with high expectations, that would have been silly, but I was looking forward to it in a way that defies my general like of good taste (not unlike my relationship with Jackass.) Maybe it was just the vibe I was feeling, after seeing High School last year, upping the ante with a stoner-fantasy genre hybrid suddenly felt like exactly the nosh I was hungry for. If you have always been more of the “let’s rip hits and play D&D” than the “let’s eat marshmallows and work on our stat sheets” kind, then Your Highness would seem like a pretty obvious outing for the weekend. But as easy as stoner comedy, mixed with any genre, seems like it should be, even it has a gracefully hazed sophistication that has to be clued in on: the reason that Evil Bong has never once been equated to Up in Smoke. There isn’t a formula for this sort of subgenre as much as there is a vibe, and I’m sad to say no matter how much you tint your eyes rose coloured before entering the theatre, Your Highness doesn’t do a great job flowing with it.

Fabious (James Franco) is a handsome, dashing and skilled prince, known for journeying on brave quests and vanquishing terrible foes. This is unlike his younger brother Thadeous (Danny McBride) who’s a slacker, at best, more known for lazing about with goat men and pestering dwarves. Fabious is now about to wed Belladonna (Zooey Deschanel), a gorgeous virgin he had rescued from the clutches of the evil, magical and awkward Leezar (Justin Theroux.) Any separation anxiety is cut short when Leezar takes back his choice virgin to fulfill a dragon bearing prophecy. And finally get laid.

Fantasy fiction and stoner audiences are a really great relationship. The two styles can be so synchronic that it’s difficult to say which of fantasy’s greatest champions weren’t, ahem, inspired by the other. From Avatar to Wizards, plenty of actual fantasy films can circumstantially become potent comedies through, ahem, ‘inspiration’. Admittedly, that’s probably an active element in Wizards. So this film should have been a real cinch, simply push the naturally absurd elements of the fantasy genre, removing any subtle silk screen between it and it’s greener counterparts should make for a good, if not blunt, time. While the stoner goof motif is certainly used as an excuse for the freedom of its fantasy silliness, its balancing of priorities between the two genres is unusually mixed. And not in the way you’ll expect.

The fantasy, surprisingly, holds its own. While in this context it had all rights to just jerk about with every Tolkien trope, they shockingly worked beyond it and some legitimately neat concepts peak through. A tribal warlock who can turn his hand into a beast of snakes by dipping it in a vat of what appears to be mustard, and even Leezar’s goal, to impregnate a pretty virgin with a dragon seed, isn’t even that far out of the question for a mystical paperback. This sounds like a pretty big upside, yet it actually begins to take away from the more hoped for comedic elements. Franco and Natalie Portman (who plays a vengeful archer) play their characters a bit too straight; surrounded by plenty of others who do practically the same, it feels like they are dulling the sharper objectives of the movie. Even more hampered by similar woes is the action and fighting scenes, which are all done fairly conventionally. Ask any Jackie Chan fanatic and you would know that having funny fights can carry the comedy by itself, so to have choreographed the sword play be so narrow feels like a huge missed opportunity. And this just leaves us with the intended comedy, which doesn’t fare much better.

I am sure that finding out the humour is entirely juvenile won’t surprise or disappoint you, but what you don’t know is just how flat it all felt. Almost every punchline was about dicks, and if it wasn’t a punchline it was just throwing the word ‘fuck’ around the script hoping it would sometimes click with the audience. Even weed, yes, weed, which by the very title should be the assumed uniting force is barely present at all. Complaining that ‘they weren’t high enough’ isn’t a very typical grievance, but in a self labelled stoner comedy it is pretty surprising that there are only two brief encounters with lush dank in the feature length film. Get off your high horse and just get high, stoners are hilarious and you know it. This film, sadly, isn’t as funny as a pothead trying to justify his own actions.

I was hoping for a re-enactment of playing Dungeons & Dragons with your most blazed and vulgar friends, pushing a quest forward without taking it very seriously, instead what we have is more akin screaming wiener while The Black Cauldron plays. The gags all seem similar and by the second act it neglects to either introduce a new angle to the humour or even let any of it accumulate into a larger jest. The best jokes were used up in the very first trailer (that got me so dang excited too!) If you think getting ‘inspired’ beforehand may aid you in this quest, I regret to inform you that the fantastical of Your Highness never taps into that chaotic fiasco which usually unleashes such guttural giggles. It seems to worry about respecting its own fantasy elements too much to respect its comedy.