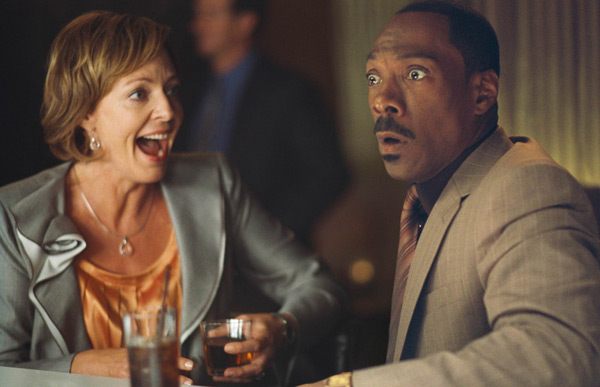 Oh Eddie Murphy, what the hell happened? The man was once one of the greatest American comedy stars. He starred in 48 Hours, Trading Places, Beverly Hills Cop, and his hysterical stand up film Delirious before he even hit 25, not to mention his work on SNL. That kind of period of absurd success tends to isolate major talents with stardom and set them down a path to disappear. Murphy could still be relied on for the occasional pleasant surprise like The Nutty Professor, but over the last decade he’s sleepwalked through a series of the worst mainstream comedies imaginable. His latest project, A Thousand Words, just might be the lowest low of a derailed career.

How bad is the movie? Well, Paramount has been sitting on it for four years, too embarrassed to release it. To put things into perspective, Meet Dave, Norbit, and Imagine That were all deemed passable for release during that time and yes, this pseudo spiritual claptrap is actually worse. The only reason it’s hitting theaters at all was because in the fall Tower Heist was hyped as a return to foul-mouthed form for Murphy and he planned to host the Oscars. Well, neither worked out and now A Thousands Words slips onto screens with even greater Murphy apathy amongst audiences.

The film takes one of the finest verbal comedians alive and crams him into a concept that takes away his ability to speak. Murphy stars as a literary agent who never reads anything and tries to sweet talk a spiritual guru into letting him publish his first book. Inexplicably, a magical tree pops up in Murphy’s yard that day and it loses leaves with every word he speaks. It will kill him once those leaves run out. Why, you ask? Who knows? It’s never explained, but it does mean that Murphy has to do some hilarious shtick like order a triple espresso in mime.

But don’t worry, this isn’t just about slapstick. The filmmakers actually take the concept seriously and force Murphy to fix his marriage, rebuild his relationship with his Alzheimer’s suffering mother, and discover his spiritual side for the first time. Vomit bags were not offered to audiences at the preview screening, but it wouldn’t be a bad idea for the film’s general release.

The script comes from Evan Almighty’s Steve Koran, promising the same gratingly sentimental spiritual messages only without any mention of Jesus this time. It was directed by Meet Dave’s Brian Robbins, Murphy’s new directorial collaborator of choice, which guarantees a collection of the blandest possible slapstick sequences geared to disappoint audiences of all ages. It’s a perfect storm of the worst types of Hollywood filmmaking: the sentimental, awards bait, spiritual awaking picture and the lowbrow family comedy.

It’s one of those movies in which every scene feels like it was crafted for focus group quadrants rather than an actual audience. Like it was created through software that can take any premise and build the most obvious Hollywood narrative clichés around it. This is the type of comedy that people like Steve Gutenberg are supposed to do in the direct-to-video portion of their career, not as a vehicle for one of the biggest comedy stars of all time. When Murphy was doing early interviews for his aborted Oscar hosting gig, he claimed that he was tired of starring in big movies for profit and now just wanted to develop his own projects. Hopefully that wasn’t just talk because it’s hard to imagine that anyone actually enjoys seeing Murphy in dreary comedies like this. It’s been so long since he actually cared about filmmaking that there’s a chance he won’t be able to get his groove back, but even a failed attempt from the comedian actually trying would be better than 2 Thousand Words, 2 Furious.