Band of the Month: Dusted - That Shelf Skip to main content 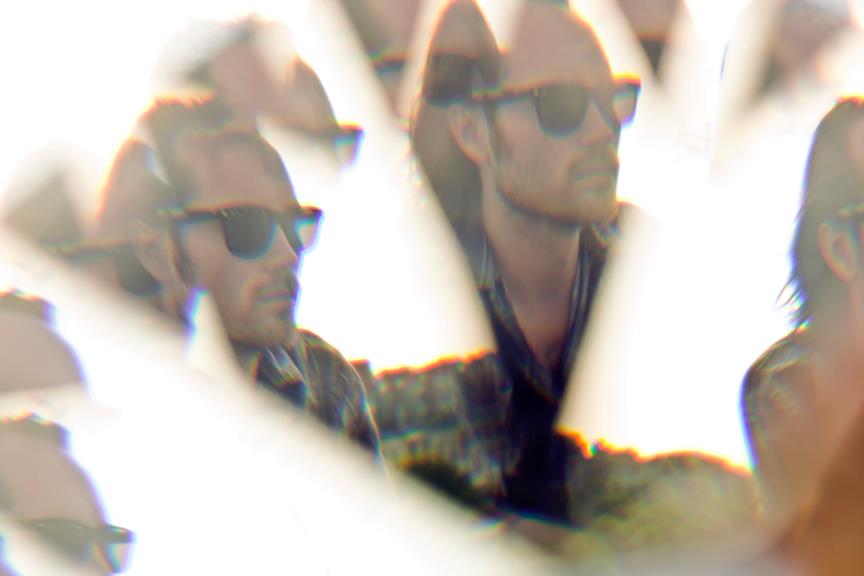 You know how it’s been so humid lately? (Am I the only one whose eyelashes have even been sticking together?) It’s so hazy in Toronto these days, as storm clouds tempt to thunder and then don’t really come at all, hair frizzes to a scary level and the sun looks down on you with the biggest smirk. If you’re looking for something to calmly lift you into a comfortable zone, then new Toronto band Dusted‘s new album, Total Dust, will do the trick.

Dusted is the duo of Brian Borcherdt (of Holy Fuck) and Leon Taheny (affiliated with Final Fantasy, Germans, Rituals and Bruce Peninsula). Their soothing soundscapes of haze and fuzz compliment the sweet melodies that feel like they’re coming from the earth. It’s the euphoria of the wind in our faces we feel when we cross over to the islands on the ferry, it’s the lying on your back in a park watching the tree leaves rustle, it’s the late night bike rides when you feel on top of the world soaring through empty streets. “Toronto rules, if you like hangovers and hot summers,” says Borcherdt. You’ll forget about the uncomfortable sweat and be stopped in your tracks, but you might not even realize it at first. Borcherdt’s voice is a constant hum that sounds like it’s playing off a tape recorder along his sometimes amped up, sometimes stripped down guitar, while Taheny’s drumming is more the quiet, laced backbone on record, but live he lets loose.

You can catch Dusted playing with Cousins and Chad VanGaalen on Thursday at the Mod Club. First, find out in this Q&A with Borcherdt how they quickly came up with their sound, how he thinks Dusted will last a while and what Holy Fuck’s up to.

Dork Shelf: How and when did Dusted start?

Brian Borcherdt: Our first show was for SXSW this year. But Leon and I got together in the studio, winter, early 2011, with the focus of working on a record.

DS: Can you explain the story behind ‘Total Dust’ and the process of making it?

BB: I recorded a couple tracks, prior to meeting with Leon. Sort of as an attempt to get things started on the right foot. As well I played a show, solo, same bill as Leon’s other band, Rituals. So by the time we sat down in the studio, we had a reference point from which to start. We began with an aesthetic in mind, starting with live off the floor recordings of vocal and guitar, sung through small blown out amps. After day one we had the album in sight, not exactly done, but the blueprint was there.

DS: Did you write the music together, or does the partnership come together live and during recording?

BB: I had the songs previously conceived. Dusted has come about, more fully realized as a live band, in the months since finishing the record. It was more of a production team kind of collaboration. Now it is a a band band.

DS: How have you developed your sound? How would you classify it?

DS: What’s it like being a musician in Toronto? And being in multiple projects simultaneously?

BB: Toronto rules, if you like hangovers and hot summers. There’s lots of cool bands.  Lots of unique scenes within a scene I guess. Dusted don’t exactly fit with one particular thing, thankfully. It’s not unusual to play in multiple bands. It keeps things exciting.

DS: Brian, you’ve been involved with numerous projects besides Holy Fuck (I’m recalling Fields of Fur), what’s made this one stick? Do you see this band being around for a while?

BB: I definitely see this being around for a while. It balances well against the very different sound Holy Fuck are doing. Plus I really need an outlet for actual ‘songs’ that I write. I see this as being a symbiotic relationship for Leon and I. We are both getting what we want from it. That’s important; and that’s what will make it last. If time permits, I’ll still squeeze in other projects. I’m stoked about LIDS, a band with Alex from Metz and Doug from Constantines. And Leon is super busy still producing other records.

DS: Where do you like to play in Toronto?

BB: We don’t have a favourite place to play. There are classic venues and sweaty little spots with crummy PAs. But it’s always fun to share the bill with bands we like to hang out with as people.

BB: Assuming a dork shelf is a shelf in your home, a place where you put your nerdy favourite things?  I have three important dork shelves, books, LPs, and misc (DVDs and stuff).

I have very few DVDs- Classic Simpsons, Hitchcock Boxset, Tarkovsky’s Solaris, etc.  Books, I have many many, and most still unread. I’m excited to continue reading Part 2 of Cervantes’ Don Quixote this summer (saving it for vacation). Currently I’m reading Ray Bradbury’s Dandelion Wine, simply because sometimes I need to be reminded why summer is so special regardless of traffic and heat, and why I should always keep myself healthy enough to be able to run fast for no reason. My turntables and all my vinyl are buried in boxes in the basement, as my wife and I just moved in to our new spot. I can’t wait to dig ’em out though. It’s a bummer being without my favourite things. And right now it’s my records and music equipment that remain unpacked.

BB: Holy Fuck just began recording yesterday. But we suspect that will take a while yet as we are just getting started on a record that we haven’t gained perspective on yet. Like I said, I’m excited about LIDS. I really want to begin tracking some songs for release soon.  Otherwise Dusted have started writing new songs and are totally stoked on working on them in the studio. We want to tour. And we want matching robes with our monograms on them.

DS: What else should we know about Dusted?

BB: Our eyes shoot lasers, well, really just red beams of light. We can’t actually melt anything with them. We can point at stuff though, which is helpful.