Blood Quantum Review: A New Twist On An Undead Tale - That Shelf Skip to main content 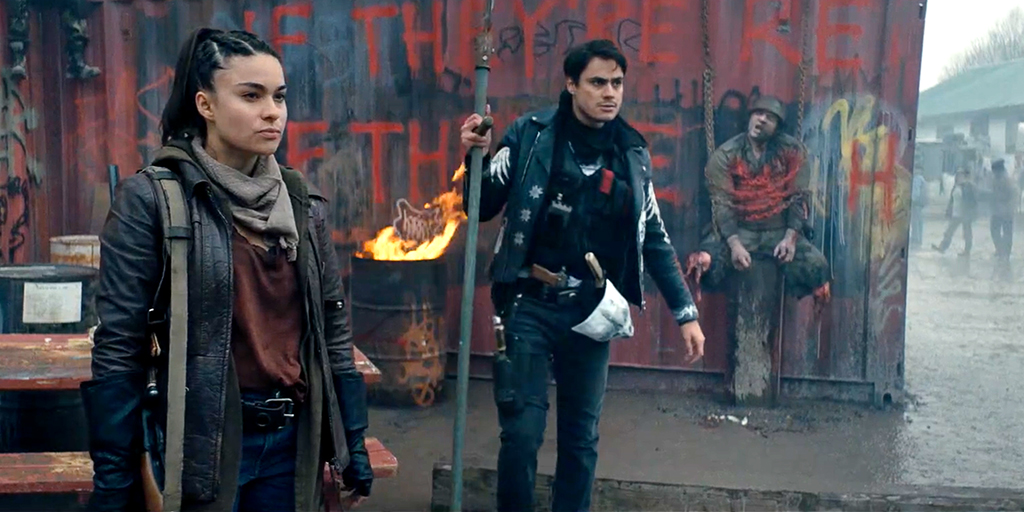 Always on-brand, zombie movies refuse to die, and with good reason. These undead, hungry creatures are a projection of the worst parts of our humanity and there will never be any shortage of those. Blood Quantum takes an older monster, puts it in an even older cultural war, and attempts to present this as a new take. The end result is a gory, uneven zombie film that mostly works when it realizes its own intelligence.

Blood Quantum (reviewed here and here out of TIFF 2019), wastes little time in getting to it. Taking place on the Red Crow reservation, things are fishy from the beginning. Namely, the fish. Salmon caught in the river just won’t stay dead. Just as people and dogs are following suit, it is clear to police chief Traylor (Michael Greyeyes) that something big is going on. Unfortunate timing as his son Joseph (Forrest Goodluck) and Joseph’s half brother Lysol (Kiowa Gordon) have just been arrested after a night of debauchery. This wouldn’t be too disappointing for Traylor and Joseph’s mother Joss (Elle-Máijá Tailfeathers) if it weren’t for the fact that Joseph’s teenage girlfriend Charlie (Olivia Scriven) is pregnant. After some moderate family drama, both Traylor and Joseph are bit by zombies, and we are brought six months into the future.

Now, all of society has fallen. To the point where there are oil drums filled with fire and spray painted storage lockers lining what used to be this quiet reservation. Perhaps the only original thing here is the fact that Traylor and Joseph are still alive. It appears that in Blood Quantum’s version of the zombie outbreak, indigenous people are immune to the epidemic. They are trying to keep their families safe however they can, and are trying their best to help the white people who appear uninfected safe too.

This concept of the selectively resistant to becoming the undead is a fascinating take on the potential for new zombie mythology, and Blood Quantum is truly at its best when it is exploring the world that premise would create as well as the world that bore that possibility. Seeing white people beg these indigenous saviours for help, only to become a threat themselves feels like a sharpened knife at the throat of what is the true reality of our own world. Horror often makes it possible to see history through a cleaner lens and this here is a perfect example of such. Though the film itself thankfully never makes that subtext a part of the actual text, these critical arguments are bubbling violently just below the surface.

And speaking of violence, there are some excellent kills and gore gags in Blood Quantum. No one will accuse this of being a metaphorical but bland horror film, as there is no shyness about dismemberment and mayhem. Some of the best acts of acute brutality are early on, as the outbreak is in its infancy, and they are delightful. I am talking bloody vomit and chainsaws to heads, and other treats. The camera does occasionally shy away, and instead show us a character’s reaction to the carnage rather than the carnage itself, but this only makes the grand reveal of a future assault that much more jarring.

Blood Quantum also does its due diligence to offer nods of appreciation to the deep history of zombie cinema. Themes of pregnancy and the re-establisment of the nuclear family are prominent from both Romero and Snyder’s Dawn of the Dead, and that is maintained here as an exploration as well. Violence, the police state, and deceit are also carried into the world of Blood Quantum as proud and cognizant elements of zombie tradition.

Unfortunately, Blood Quantum also relies heavily on one-dimensional characters and forced family drama to advance the human plot within the film. As much as I have been singing the praises of the world creation and flesh flaying, too much of the film’s actual running time is dedicated to character conflicts that I barely care to follow. Lysol is a pillar of toxic masculinity and his unnecessary displays of such are tedious and distracting from all of the good bits of the movie. Also, the jump from the early outbreak to mid outbreak feels like a lack of focus rather than a spread of storytelling.

There will always be something new to scare us about zombies because humanity will always be scary. Blood Quantum adds a new, compelling facet to the lore of zombies, and does so with skill and guts.