My column for this month is a special edition in honour of the upcoming Canadian Music Week: a five-day festival showcasing great Canadian music acts as well as conferences, lectures, award shows and films. It’s going to be a wild ride, and I want to show you which events will make you lean forward, flail your arms and smile.

Canadian Music Week (and Fest – the music portion) requires that you purchase passes to attend events (obviously). You can purchase weekly or daily passes. For more pass information, go here. However, if you want to go to just one concert, individual tickets can be purchased here.

CMW runs March 10-14, with events during the days and concerts/films in the evenings.

This is the first part in a trio of articles in preparation for CMW. Today, I’ll tell you which films I think are worth seeing.

Streets of Fire, National Film Board of Canada, 7 p.m.

This looks like the Watchmen of rock operas (excuse my lame comic book joke. Or don’t, and send me hate mail). Just read the following sentence and see for yourself why Streets of Fire is ridiculous and awesome at the same time: “A mercenary (Michael Pare) must act to free his rock star ex-girlfriend (Diane Lane) from the clutches of The Bombers, a motorcycle gang led by Willem Dafoe in one of the most charismatic roles of his career.” What?! This sounds too epic to be true.

The website says this is a re-working of the Phantom of the Opera, except as a 1970’s rock opera and with a musician getting mad at his producer. Paul Williams stars in the film, composed and made the soundtrack. Williams will also be speaking during the conferences.

Made by Gruff Rhys, the front man of Super Furry Animals, this is a journey through Welsh communities in South Africa as a portrait and a discovery.

It’s a documentary about The Doors. Narrated by Johnny Depp. It also promises to have “hundreds of hours of rare, personal footage.” 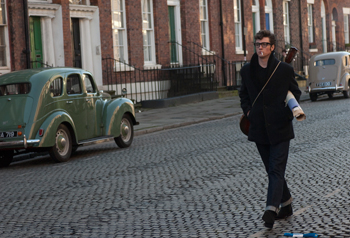 Sam Taylor-Wood, a photographer, is making his film debut in a big way, by profiling the “early story” of John Lennon before The Beatles. I’d say this would be great to see, but of course I still love Across the Universe.

For more information check out the CMW Film Festival page.