It’s time to step up Canada, your Captain needs you.

Captain Canuck, the hero of the Great White North created by Richard Comely and Ron Leishman in 1975, is being resurrected as an animated web series. He can’t do it alone though, which is why there’s the Captain Canuck Indiegogo Campaign, and upcoming fundraiser on April 27th. Brought to you by an all Canadian creative team made up of Paul Gardner and Dean Henry (Creative Directors), Sam Chou (Director of Animation, credits include work for Disney, Warner Bros and Dreamworks), Kalman Andrasofszky (Character Designer/Concept Artist, freelance illustrator and cover artist for Marvel & DC), Mike Valiquette (Director of Development, Smiley Guy Studios), and Jeremy Diamond (Writer, Smiley Guy Studios), and spearheaded by Fadi Hakim (Executive Producer and restauranteur/owner of The Lakeview). A relatively small team for what will hopefully become a huge deal, we sat down with Gardner, Valiquette, Andrasofszky and Comely to talk more about the project.

Although there was interest in adapting Canuck in the past, this seems to be the right team and the right time for the iconic character. “As early as 1980 I was approached about doing an animated series,” Comely says, “[eventually] by about ten people over the years but nothing ever happened. It never got anywhere. I wanted [the animated series] to be of a high enough caliber that I wouldn’t be embarrassed by it, no matter how much money resulted from it. Something that older fans would appreciate, would feel was doing the property justice.” After seeing a test animation by Sam Chou, Comely recalls thinking, “this is [what] we’re looking for.”

This isn’t quite the Canuck you might remember though. Keeping his origins and history in mind, Cap has a new, modern look, thanks to Kalman’s redesign. The armoured suit offers better protection than Cap’s previous spandex outfit, bringing this Canadian icon to life in a more realistic way than ever before. Appealing to a wider audience through making the series more believable is important to the team, as is treating the original with respect, Valiquette explains. “Richard brings this iconic property to the table that has that recognition— we talk about it as sort of our cultural wallpaper. Everybody knows it from somewhere, even if you don’t know it as intimately as some of us do. We’re all very respectful of the property, we all want to see it become something.” Fan reaction has been positive to both the test animation and promotional poster, according to Valiquette. “People are responding really, really well. It’s been tremendous. We’re not wrecking this thing that people remember from their childhood— that’s the litmus test. It may take a little longer because we’re not just doing the first thing that comes out of the box, but I think the key thing here is to do a really good project. The voice talent is lining up, we have a great artistic team on board, now all we need is a little cash.”

On the topic of voice talent, fans of the Lost Girl series will be thrilled to hear the voice of Kris Holden-Reid as Captain Canuck, with co-star Paul Amos voicing the villainous Mr. Gold. Past friends and foes of Canuck’s will also make an appearance in the web series, with redesigns of their own— some more dramatic than others. “One of the old enemies, Blue Fox, is going to be a female.” Gardner confesses, a huge change from the previously all male cast. “We want to reach out to a wider audience… [women] want to kick butt as well! So it’s important to represent that. Dean and I were able to take something from our childhood and update it for a new audience by looking at what made that series work for us as kids, and what will work for this next generation. I’m selfish, I want to make it for me as well,” Gardner admits with a laugh, “but I have two young boys, and when they saw the drawing that Kalman did, they said ‘Dad, this guy kicks butt!’ Yes, he’s going to kick butt!” 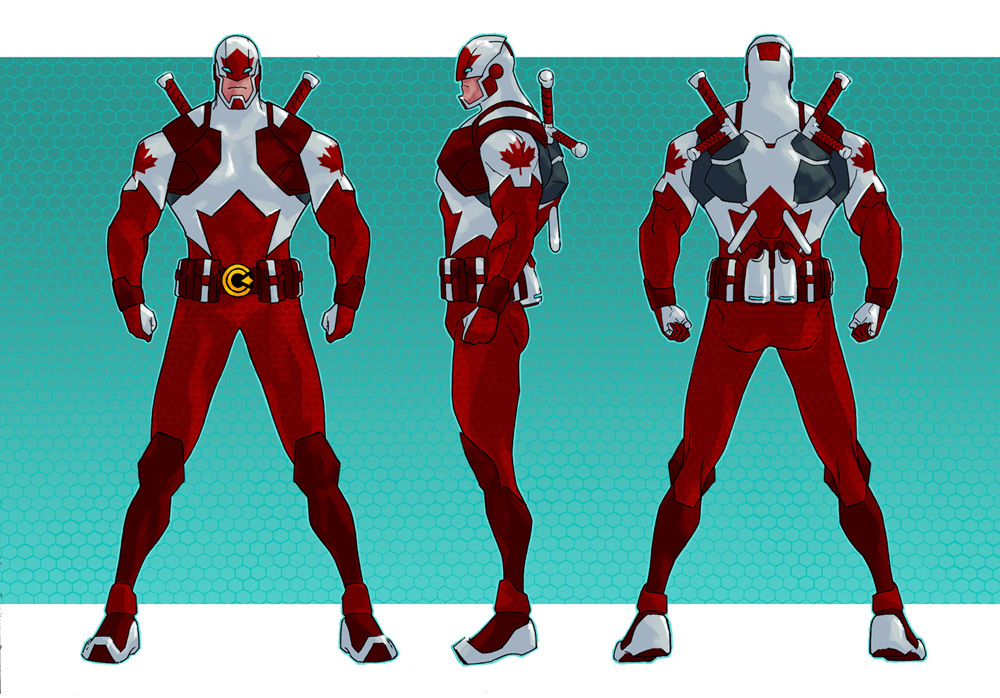 Kicking butt on his own terms has been a staple of Captain Canuck since his inception. “Distinct from corporate icons like Wolverine, Captain America and Spider-Man,” Andrasofszky explains,  “Captain Canuck has always been an independent property. Richard created him in Winnipeg in 1975, and he printed, self published and distributed that all himself. It’s a Canadian product, through and through. Made by Canadians, produced by Canadians, distributed by Canadians. We’re trying to continue that same legacy by keeping it a small production, by doing this our way and doing it the way it was done before.” That’s important, to Andrasofszky and the entire Canuck team, but that’s also where fans need to step up. “We don’t have the funding that something like an Iron Man or Spider-Man movie would, so if you want to see more Captain Canuck, show that it’s something you care about and want to see. There is a multi-tiered plan: the webisodes are just the first part.” Andrasofszky confesses excitedly. “Help us do it our way, do it right, and keep it Canadian.”

So come out to the Canuck fund-raiser on April 27th, or donate online through the Indiegogo campaign. Show your support for this Canadian icon and set the stage for more Captain Canuck for everyone.