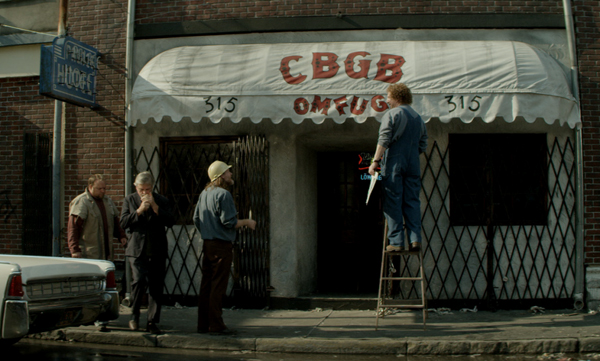 The abysmal CBGB is about as appropriate and fitting of a tribute to the sadly lost NYC Bowery dive and punk rock Mecca as playing a Jock Jams album over pallbearers carrying a casket to a hearse. There isn’t a punk rock bone in Randall Miller’s incredibly off base and annoying movie. Even worse, it doesn’t even matter that the story itself isn’t exactly accurate or filled with believable performances from one of the most wasted all star casts to be assembled this year. With this script and this approach it would have been unsalvageable even as camp. I would say it’s the Rock of Ages version of the birth of punk rock, but that would be an incredible insult to Rock of Ages.

An astoundingly miscast Alan Rickman stars as famed punk rock pioneer Hilly Kristal. After a few failed previous attempts at operating bars in New York in the 1970s, he buys an almost literal shithole in the Bowery with the intention of turning it into a country and blues joint. When that fails, he starts booking new and edgy acts that begin to transform his bar not into a nicer place, but into a cultural hotspot playing some of the hottest up and coming acts.

Only mere seconds into the film, and Miller (Houseguest, Class Act, The Sixth Man) has already let things go off the rails, not able to decide if he and co-writer and frequent collaborator Jody Savin want to tell the story of Hilly’s upbringing or the founding of Punk Magazine, founded by John Holmstrom (Josh Zuckerman) and Legs McNeil (Peter Vack), and helped by writer/future director Mary Harron (Ahna O’Reilly). Right off the bat, Miller makes Punk Magazine seem like a big deal, when it could all be cut. It’s only there for “colour,” but why even add it if it can’t bother to tell the story in a straightforward manner. They have no bearing on the story except to underline how Lou Reed hung out at the club and to explain away the God awful and over stylized editing.

Miller makes every transition and montage happen in overly cutesy and comic book panelling designer to look like the pages of Punk, but even worse. It’s insufferable seconds after its first employed and downright torturous as it goes on. It’s a ludicrous homage that makes Walter Hill’s original comic inspired vision for The Warriors look restrained and reasonable. It goes as far as including sound effects, stage direction on screen the suggests the obvious (“THIS WAY, HILLY!,” like I can’t already see him going down the fucking hallway), and even a rat who voices his disgust at the squalor around him via a thought bubble. Yet that same rat in an R-rated movie about punk rock still has to say “effing” instead of just saying “fucking” like everyone else around him.

These comic book sequences never stop and neither do the useless montages, like watching Hilly walking his constantly shitting all over the place dog or following someone as they buy a pair of boots like it’s a major plot point. People and famous bands are introduced with musical stings or sound effects. These famous figures and bands are then whittled down into smaller montages where more miscast people lip-sync and air guitar to famous tunes unconvincingly. I have never done cocaine in my life, but I can only imagine that Miller’s sole goal with this film wasn’t to tell a story, but to as closely approximate what it’s like to do an 8-ball in a single sitting by yourself. And it’s just as nauseating.

No one here is able to give an actual three dimensional performance because outside of Hilly, all of these people, famous or otherwise, are complete ciphers that just have things happen to them for the sake of them happening or because the film begrudgingly decides to hit the occasional historic beat. It’s actually astounding to even believe any of these people could even be drawn to Hilly the way Rickman portrays him, in what is beyond any shadow of a doubt the worst and laziest performance of his career. Not bothering to change his voice to sound like a small town New Jersey Jewish farm boy (even though his co-stars playing family members make the effort) and desperately hoping that his perm will trick people/cover up the flop sweat, Rickman phones this one in so completely that if this really was the 1970s the long distance charges would be unpayable even by the film’s team of no less than 23 (!) producers. Rickman previously worked with Miller on the equally terrible films Bottle Shock and Nobel Son, and now I can only assume that he does movies with him blindly as a good friend or that Miller has excellent blackmail material.

Donal Logue gets to play Hilly’s closest confidant, but outside of always wearing a hard hat, having a vaguely Amish accent, and getting a couple of moments to brusquely admonish his boss for running the club into the ground, he’s useless. Ditto Ashley Greene as Hilly’s daughter and soon to be bookkeeper, who is again, only there to tell Hilly that he’ll never be able to pull off running this club. Good on Freddy Rodriguez, though, as a neighbourhood junkie and the club’s head cook, who at least has some fun with his role.

As for the bands that show up, it’s not really worth caring who is playing who in them or what significance they even have. Malin Akerman makes an unconvincing Debbie Harry on stage, but off stage she’s better. Mickey Sumner probably comes the closes to capturing the essence of Patti Smith in her brief appearance. Foo Fighters drummer Taylor Hawkins might be the worst choice to play Iggy Pop that anyone could have settled on, blonde hair and washboard abs or not. I don’t give a shit about anyone who played the members of The Ramones or Talking Heads, which is a huge problem. Actually, the only person to even come through the club who I wanted to see more of was Bradley Whitford’s coked to the gills A&R man, but sadly he gets maybe 45 seconds of total screen time.

But aside from Whitford’s great cameo, the film only comes briefly to life through yet another digression in the story when Hilly decides he wants to manage up and coming shock act The Dead Boys. Now this band, comprised of actors Justin Bartha, Rupert Grint, and Bronson Adams, are actually magnetic to watch, especially Bartha, who really brings it as frontman Stiv Bators. I wanted to see the movie about these guys rather than the cornball comedy that’s going on around them.

It’s not that there can’t be a good comedy that could be made about the founding of CBGB’s. It’s not even that upsetting how silly it is. What is upsetting is just how unfocused and tossed together it all is. It thinks in its heart of hearts that punk rock is a cartoon and an excuse for a stacked soundtrack of hits. It isn’t. There’s a real story that could have been told here and Miller blew it. Clearly he had to be interested in it, but much like how every few minutes Hilly has to stop and wonder aloud “There’s something here,” Miller never puts his finger on what he wants to do. The debate as to whether or not punk is dead rages on, but this movie never had a chance at life.