I can’t stress how important VHS box art was to the children of the late 1980s.

My brothers and I used to scan the video store shelves for hours, waiting for something suitably lurid to jump out at us. This was well before I had any interest in horror or exploitation, so we were searching for more elementary thrills: guns, explosions, and ninjas.

It was extremely democratic. We had no notion of what was a success or failure at the box office, or what sort of budget the film had, or even a coherent idea of star power. In our minds, Sho Kosugi stood equal with Chuck Norris, Arnold Schwarzenegger, Michael Dudikoff, and Sylvester Stallone. We would just as happily devour some patched together Godfrey Ho ninja nonsense as we would Commando or Predator. As long as the cover featured fireballs erupting into the sky, we were in.

But then it appeared. A Han Solo-esque rogue pointing a pistol. An Asian martial arts master with a samurai sword. A butt-kicking beauty holding a shotgun. And at the center? The mandroid. Half man, half tank. The Eliminators poster was my first experience with Empire International Pictures, and I was a fan well before I ever saw the movie. 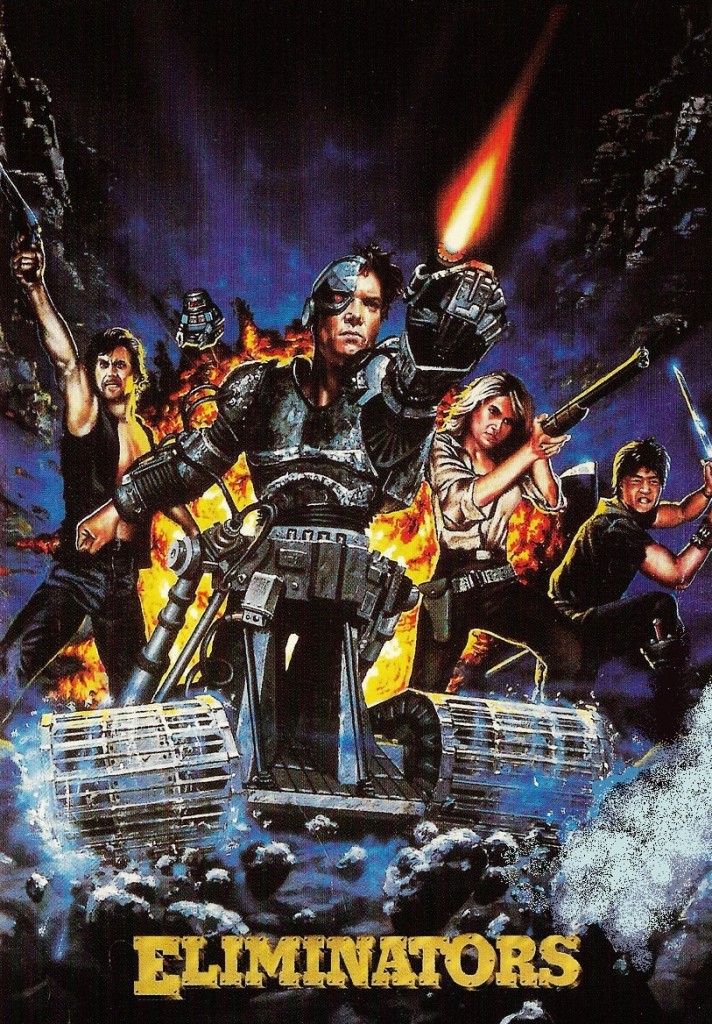 But Empire was more than just colourful poster art. It was an entire universe of horror, fantasy, and science fiction. And while the films it distributed often lacked the polish of Hollywood studio fare, you weren’t likely to see a man on tank treads rolling around in a Steven Spielberg movie. These were movies by fans, for fans, while still including a number of legitimate classics among their 40 or so releases.

Over the next several months, I’ll be taking a look at the films that led up to the formation of Empire International Pictures, as well as the films they released throughout their ’80s heyday. I’ll also be creating short videos that go along with each review, giving a brief overview of the film’s plot, as well as any of the more fun, crazy or ridiculous moments. I don’t pretend to be a fan of everything the company released, and much of my response will necessarily by tinged with nostalgia, but I hope to give a detailed and coherent look at a studio that burned brightly for six short years and influenced a generation of genre filmmakers.

Before Evil Bong, or Gingerdead Man, or Puppet Master, or Trancers there was Crash!

The husband here is played by José Ferrer, doing some admirable slumming, as antique expert – and king prick – Marc Denne. He’s a thoroughly contemptible character, attempting to imprison his (much younger) wife Kim (Lolita‘s Sue Lyon), before throwing her out of the house and arranging her bizarre accident. She ends up bandaged and unconscious in hospital, clutching the idol she had purchased for her husband earlier, and occasionally muttering “Akaza”, which is apparently the Hittite god of revenge. Uh oh!

But the plot is just an excuse to see some twisted metal, even if it makes little damn sense. Before Kim even purchases the Akaza idol, it’s already causing trouble; starting with a hippie couple getting rammed off the road and into a tree, which immediately turns their vehicle into a fiery inferno. I’m not sure what they did to deserve Akaza’s revenge, aside from being in the wrong place at the wrong time. In fact, the convertible just seems to want to create a little free-floating carnage, running people off the roads or into each other without much rhyme or reason. 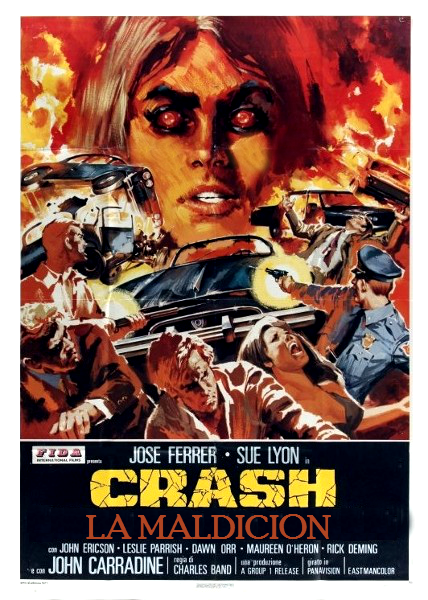 Kim eventually wakes up, but is unable to remember anything about her life before the accident. She befriends Dr. Gregg Martin (John Ericson), who is curious about her interest in the bizarre idol and brings it to Dr. Wesley Edwards (John Carradine, in a brief appearance) and he directs him to.. Marc Denn. Denn begins to grow concerned about Kim’s memory returning, and becomes increasingly suspicious about the power of the idol, particularly after his motorized wheelchair springs to life and kills his dog. Yes, this is something that actually happens.

Meanwhile, the killer car is murdering police officers and tourists in a plethora of fiery crashes, including a spectacular gas station explosion that Band (and cinematographer Andrew Davis) smartly lingers on. Occasionally we’re treated to the image of a possessed Kim, still covered in bandages, her eyes blood red as she psychically guides the vehicle’s destruction. It’s the film’s creepy highlight, and is a fun counterpoint to the more grounded scenes of destruction. Eventually Denn convinces Kim to return to his house and confesses his evil deeds before locking her in the sauna. She’s rescued by Dr. Martin, but not before she sends the car to finish off Denn. If you’re guessing it ends with a fiery explosion, you would be right.

It’s all completely ludicrous, but remains a lot of fun despite some weird pacing issues. Kim’s initial market visit to purchase the idol seems to take forever, and a montage of crashes that come right before the ending seems like some obvious padding. We also spend a little too much time with Dr. Gregg and his policeman buddies, and Ericson’s bland performance is a downer compared to the supernatural shenanigans that liven up the rest of the movie.

While far from a lost classic, Crash! remains a unique highlight in Charles Band’s early career, and is worth seeking out for fans of mass destruction. While it might seem at odds with the colorful horror and fantasy that Empire would later churn out, it shows a filmmaker already adept at delivering the carnage and (sorta) chills that audiences crave.

While the film was previously only available on VHS or via an import DVD, in 2015 it was finally brought to DVD through Full Moon Direct.