Spoiler Warning: “The Rebel Flesh” (6.5) and “The Almost People” (6.6). Also, I wouldn’t read any further into this post unless you’ve watched the entirety of “A Good Man Goes To War” (6.7) right to the very end. I mean to the last second. You’ve been warned, alright? Spoilers.

After being kidnapped sometime between “The Big Bang” (5.13) and “The Impossible Astronaut” (6.1), Amy has given birth to a baby girl named Melody. She and her baby have been held against their will by the Clerics (originally from “The Time of Angels” (5.4)). Ten thousand light-years away, The Doctor and the Last Centurion are assembling an army to recover her. This army includes the Silurians — how they were convinced is beyond me — Sontaran Commander Strax, Madame Vastra and her human companion Jenny, Captain Avery and his son Toby, and the black market trader Dorium Maldovar. After destroying a great many Cybermen, The Doctor and his army arrive on an asteroid called Demon’s Run, the headquarters of the Clerics. It’s here that “A Good Man Goes To War” becomes bombastic and messy, nowhere near the clean writing to which we’ve become accustomed.

And that’s just it — We’ve been spoiled by the Moffat-era of Doctor Who.

Showrunner Steven Moffat has conceived a TARDIS team with charisma to burn, whose adventures in time and space are now-classic episodes of Doctor Who. You only need to look as far as “The Time of Angels”, “Vincent and the Doctor”, “The Pandorica Opens”, “The Big Bang”, “The Impossible Astronaut” or “The Doctor’s Wife” for evidence. We’ve become spoiled by quality to such an extent that, when met with an episode that is less-than-spectacular, Whovians get angry. If “A Good Man Goes To War” was in the Russell T. Davies era of Doctor Who or a different sci-fi television series altogether, I probably wouldn’t have felt outright affronted and miserable at the end of the episode. This reaction is largely because of the treatment of two once-spectacular women: Amy Pond and River Song.

Where have you gone, my magnificent Pond? In Series Five, Amy was strong and brave and sexy and crazy — by far my favourite companion of Doctor Who. Now she is solely defined by her relationship to Rory. There isn’t an episode in this season where Amy doesn’t scream her husband’s name incessantly; “The Almost People”, “The Rebel Flesh” and “A Good Man Goes To War” were particularly guilty of this. To my outright horror, Amy Pond has been walking through Series Six like a plot device, screaming and crying on cue, hugging as directed. The scene in “Curse of the Black Spot” (6.3) where Amy grabs a sword and starts fighting pirates — all while wearing bright pink tights — is a tease of how great this character once was. As of “The Rebel Flesh”, she’s just another female in a sci-fi franchise who undergoes a freak pregnancy and needs to be saved by the men in her life. To say I’m disappointed would be an understatement. My Amy Pond action figure has now been removed from the coveted spot on my desk with the plastic TARDIS and is now slumming with some random Lego minifigs. Take that, Moffat!

And now some meandering thoughts regarding River Song and her parentage:

River Song works best as a character when she is completely independent. It’s in this way that she can maintain her mysteriousness as well as her credibility as a character. River Song is a gorgeous, gun-wielding archaeologist who is also The Doctor’s out-of-sync companion. Why does she need to be Amy’s daughter as well? By making River Amy’s daughter, Doctor Who treads into “space soap opera” territory, making the plot and character relationships unnecessarily difficult. River is a million times less interesting when you know the truth of her origins. Couldn’t we have just left her all mysterious, and let her kill someone important later?

There are many questions that arise with the revelation that River is Amy’s daughter. Let’s look at a few of the more-pressing questions: 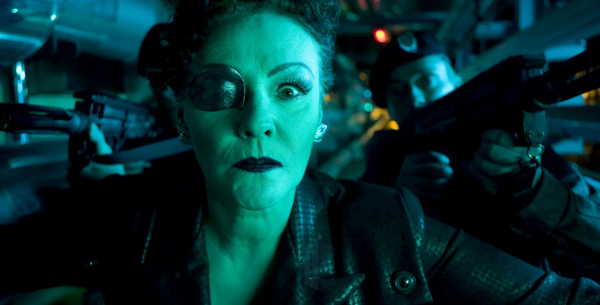