It’s difficult to imagine how a show like Fuller House can captivate an audience who, if it ever watches its parent show, is doing so with a refined sense of ironic nostalgia. I for one was expecting it to be contrived horseshit.

Despite inclinations to eye roll away from earnest emotion, live studio audiences, and Dave Coulier, the architects of Fuller House just may have gathered the right materials of self-referential humor, heartfelt emotion, and great baby acting to solidly construct a series worthy of our attentions — or at the very least, not worthy of our immediate dismissal.

Laugh, Even Though You’re Crying

Some say that comedy is tragedy plus time. A kind of fast-forwarding in action, skating over the heartbreaking and devastating, opting instead to magnify the absurdity and randomness of this world. Fuller House depends on this equation inviting us back into that House brimming with coming-of-age tales and family love and devotion, but there are still the cold hard facts to contend with.

Candace Cameron Bure returns at DJ and sure, she can Pollyanna the shit out of this, claiming her deceased partner died “doing what he loved” as a firefighter. But she has three small boys to raise. There’s very little time for us to contemplate the logistics of her tragic circumstances: Was she carrying her child at the time of her husband’s death? Did he ever get to hold his youngest boy? Did her breast milk mix with her salty tears as she grieved her loss?

Kimmy Gibbler (Andrea Barber) is getting a divorce (OR…NOT?).

She’s the quirky neighbour the Tanner men love to degrade and abuse, and she’s made her name as a successful party planner. However, her martial situation is worthy of an “It’s Complicated” status on Facebook. Her estranged ex is a philandering fool, who’s portrayal one fears, with his Latin heritage, could perhaps tip in to a tokenistic role (How Rude!)

Michelle is too good for the family.

In the first episode of Fuller House the writhing studio audience scream, clap, and jeer with wild abandon as each of the beloved characters from Full House enter the sound stage. One by one, we are introduced to our cast of characters who bring with them the information we need to know about how the cruel mistress of time has ravaged the Tanner gang.

After we are debriefed that Danny Tanner (Bob Saget), Becky (Lori Loughlin), and Uncle Jesse (John Stamos) are heading to L.A., Stephanie (Jodie Sweetin) is a DJ (the other “DJ Tanner”) making a name for herself and partying like an animal all over the world, and even Uncle Joey (Dave Coulier aka the inspiration for Alanis Morriestte’s You Outta Know) is slaying it with his comedy act in Las Vegas, but there’s still something missing: where is Michelle? Daddy Tanner fills us in stating she’s in New York to “pursue her fashion career.” The line of Tanners turn out to the audience, busting through the fourth wall and the Crowd. Goes. Wild.

Fuller House is not just a modern look at the Tanner family, it’s a Janus-faced postmodern spectacle looking both back to the past and forward to the future, all the while looking straight to the viewer to deliver a wink.

For we know the Olsen twins did not want to be part of the show, the gesturing to the audience is a meta moment — one of many.

“We look good” says John Stamos, known for his portrayal of the rakish Uncle Jesse. Who, in fact, is he speaking this line to? It can’t be for the family, for they’ve seen each other grow old, but it’s a line meant to echo the sentiments of it’s audience.

Yeah, the over used catch phrases are sprinkled throughout, but Fuller House goes way further than that. John Stamos, remarks on how things were in the 80’s; Specifically, that whenever there was a lot of hugging, he could hear the sound of violins. The string section is just as lively in this reboot with a heartfelt moment and group hug underscored by this familiar music. He looks up to the heavens directly referring to the fucking music — he is no longer held captive by the laws of his character; he is both Uncle Jesse and John Stamos simultaneously.

The New Kids On The Block 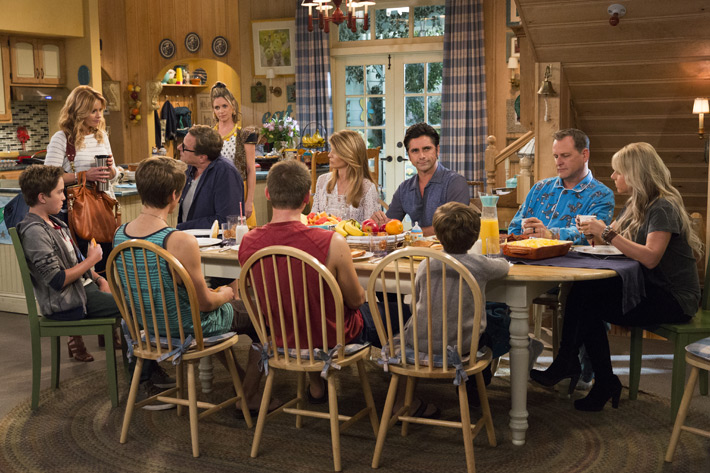 The first episode features a going away party for the patriarchs of the house. The expansive home is to be sold, and DJ is going to have to figure out single motherhood. She claims she can do it alone, but when she comes to the bedroom of her baby and confesses to him her fears about the realities of a single parent household, the whole family is listening on the other end of the baby monitor.

Danny, Jesse, Becky, and Joey volunteer to stay back and help her through this — but they’ve had their time in the limelight haven’t they? Instead, the premise of Fuller House is that Danny Tanner leaves his house for DJ to live rent free (“Do you know how much this house is worth now?), Stephanie agrees to leave her party days behind her to stay and raise the kids, and Kimmy moves in as well with her prepubescent daughter Ramona (Soni Bringas).

And so, the circle of life continues as the show ditches its original theme song and intro and instead emerges from its cocoon of 80’s infamy to give us a new set of Tanners and their children to watch grow up. There’s the eldest boy, Jackson (Michael Campion) reluctant to change, the middle son Max (Elias Harger) a precocious young lad with his grandfather’s penchant for cleaning, and a new baby Tommy Fuller Jr. played by the Messit twins.

One cannot darkly think if these two very intriguing baby actors will come to resent their fame as the Olsen’s seem to – the show points us in that direction with a split screen of baby Tommy Fuller Jr. (they just should have called him Fuller House Jr. and be done with it) and footage of baby Michelle (on of the Olsens) as the family serenades them with “Meet the Flintstones.”

The Women of The House

In third episode into the series, Stephanie and Kimmy drag the reluctant DJ out to the to get their freak on at the club. Macy Gray sings at the club, planting the thought into one’s mind: “Oh, yeah. What happened to Macy Gray?” She knows what you’re thinking. Ms. Gray shrugs after serenading us, “I won a Grammy what am I doing here?!”

Because this is Fuller House, there is a drama at the club and Kimmy is bummed out her ex-ish husband is there with another woman. Stephanie and DJ ditch the cuties they’re dancing with to help her out, and DJ calls back to her and Kimmy’s Dirty Dancing routine, in a bid to win a dancing competition.

These women celebrate one another, they do not judge, or slut shame, or ignore the feelings of others. What could my stone cold heart do but melt when they are awarded first prize by Ms. Gray? I do not have children but I want young girls to see this. I would enjoy watching this with kids: I would be laughing at the meta jokes about the past show (it looks like Danny, Jesse, and Joey are going to be “guest stars”), while I think a child has enough physical humour, realistic conflicts (running away from home, sharing a room etc), and family dynamics to enjoy. (I can’t speak for their experience though, perhaps we need an 8-year-old contributor here at Dork Shelf).

Some may ask, “Who is this show for?” with a skeptical eye. It’s for the WHOLE FUCKING FAMILY, that’s who, and shame on me for forgetting that.

And so, if you think you’re too cool to watch Fuller House, it’s my humble opinion that you should CUT. IT. OUT and see if it will be able to continue without letting what seems to be a pretty solid house deteriorate.