The first hour of the new series Gotham’s final act begins with an encounter between crime boss Carmine Falcone (John Doman) and Detective Jim Gordon (Ben McKenzie), the future man to stand beside the Bat-Signal. Gordon, the young and ideal too-good-for-this-city gumshoe has had his life saved by the deadly mafioso and finally come to some hard conclusions: he’s been chasing false leads all episode, and this guy controls everything.

Falcone lays down the rules of the game: yes, he runs the police; yes, he rules the mob; organized crime is his business and it depends on law and order.

“I love this city,” says Falcone, as if trying to hypnotize the audience into believing the same thing before wishing him luck with a good old fashioned, “In bocca al lupo.”

It’s almost as if, during this confrontation, Carmine Falcone is trying to tell us that Gotham City is a character. This city that will give birth to Batman, Joker, and a million different punny readings of the phrase “Boy Wonder” is its own living breathing character, and even though the wolf’s jaws could snap shut at any moment, goddammit, don’t you just have to love this skeezy bastard of a place?

The answer is no. You don’t have to love Gotham City.

Gotham is not a character, it’s a place. The reason that this pilot fails as a compelling piece of storytelling is because somebody on the other side of the TV screen believes that personifying a city gives him or her leeway to forego actual compelling character development. The whole hour, Jim Gordon keeps encountering familiar, albeit re-imagined personalities from the Batman rogues gallery – Selina Kyle, Ed Nigma, Oswald Cobblepot, Ivy Pepper (the new name for Poison Ivy’ s alter ego) – and all we get are brief winks as if to say, “Bet you can’t wait to see more of this guy.”

The thing is, it’s true. I can’t wait to see more of my favorite comic book characters in a re-imagined live action setting. The problem is that I’m not convinced by Gotham’s pilot that those characters are in the right hands.

Gotham opens with Selina Kyle, the eventual Catwoman, parkouring her way through a cold-open around the titular city, stealing milk and pickpocketing businessmen before accidentally playing witness to the Wayne family murders. The killing is played out in exacting detail, with a lot of gun barrels staring straight down the camera and little Bruce watching the life escape the dying eyes of his father.

Gordon is introduced in the next scene, defusing a volatile scene in the police department with a bottle of aspirin, quick thinking, and his mits. When he gets chewed out by his surly man-of-town partner Harvey Bullock (Donal Logue) the message is clear: the Gotham police are way more into shooting dudes than looking for less-lethal ways out of sticky situations. 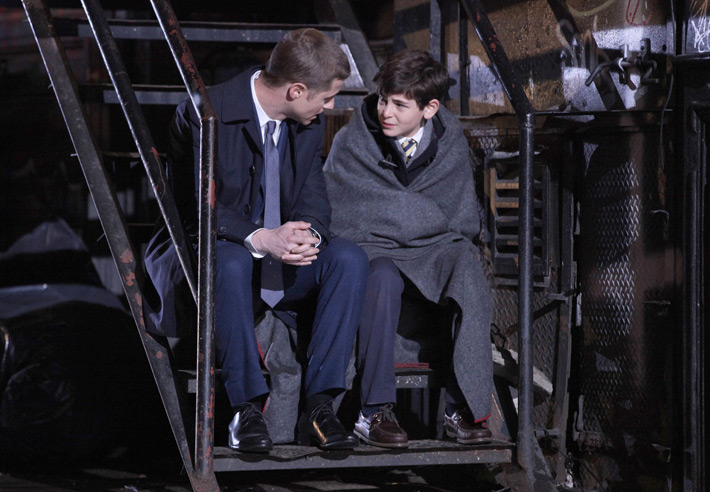 The detectives get called away from this introduction to the theatre district where Gordon and Bruce first meet, and Bullock sees big trouble – enough for him to want nothing to do with the case. Sadly for him, Jim’s compassion toward the little rich orphan got them stuck with the robbery gone wrong (or did it maybe go exactly right?) and we get a title card.

After commercial, the dysfunctional duo meet their nega-cop rivals from major crimes division who want to take the case off of their hands. Bullock gets selfish and spiteful, so the case stays with him and Gordon despite the more seasoned partner’s reluctance.

Back at the station, Bullock tries to ditch Gordon, but it turns out this down and out vet is stuck with this wide eyed new guy regardless of how well they work together. The first big red flag for Gotham is in this scene and it kills the tone. A Batman story lives and dies on its atmosphere, and while the lighting and wardrobe would all be spot-on for some Se7en style noir, an electric guitar wails in the background underlying the genre cliches instead of embracing them.

At this point, Gordon says, “You’ll get used to me,” and we’re launched into a mugger-shakedown montage set to even less appropriate music.

Thankfully, all of this tone deafness leads us to the episode’s most genuinely delightful scene and the best case to stick with Gotham for a few more episodes in hopes that it will find its footing. The detectives bring evidence to their forensics expert Edward Nigma (the Riddler) and instead of just letting the cops know what it means, he keeps trying to get them to guess his conclusions. Cory Michael Smith plays Mister Question Mark perfectly, making his riddling seem genuinely compulsive in a way that made me believe that Nigma is totally on the long road to Arkham Asylum if he doesn’t seek therapy soon.

Everything that follows is equally inconsistent. Bullock and Gordon are sent chasing leads set up to introduce more familiar villains in less exciting ways. Oswald Cobblepot (Robin Lord Taylor) is a lackey in the Falcone crime syndicate, serving new series baddie Fish Mooney (Jada Pinkett Smith), and he attempts to orchestrate a powerplay by tipping off the major crimes unit that the man who initially takes the fall for the Wayne murders (abusive father to little Poison Ivy) was framed by Gotham’s finest. 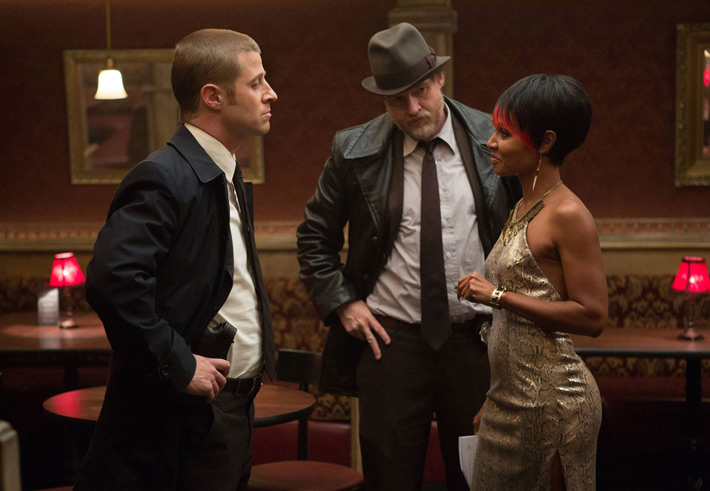 All of this – along with a few uninspiring action scenes, some checking in on Bruce, and a red herring cameo that’s supposed to have you gasping “Maybe that’s the Joker!” – lead up to the confrontation between Gordon and Falcone. At this point, ideally, you and I should be agreeing that Gotham City is a character. But it’s not.

Gotham made me angry because it takes advantage of its high profile intellectual properties in an attempt to elevate what would otherwise never grab the attention of a critical TV viewer. Having a license to use characters and settings from Batman is not permission to get away with mediocrity (though it can be argued that this happens far too often). Being able to write about Batman is both a responsibility and its own reward.

Trying to personify Gotham City is a cheap way around writing about Batman, who is the only reason this show should exist at all. Every villain in Bat-canon worth giving a damn about is a reflection of some part of the Caped Crusader’s personality reflected back at him through a violent funhouse mirror. Through an exploration of these various reflective fragments, we should be able to see the Dark Knight even in absence. There is no reason that this show, despite being before Batman, shouldn’t still be about Batman.

The final scenes of Gotham’s pilot episode perfectly illustrate problem. Bullock and Gordon drive out to the pier after barely surviving the encounter with Fish Mooney’s goons, being given a seconds chance from Falcone on the condition that Jim murders Cobblepot. He walks Penguin to the water’s edge, tells him to never come back to Gotham and pretends to shoot the villain in the head.

After a short scene at Wayne Manor in which Bruce declares that he’s trying to conquer fear, we are taken back to the river as Cobblepot surfaces. This would be the perfect time for some symbolism, threatening imagery, or any sort of beat that positions the first live action incarnation of the Penguin since Batman Returns as a character worth caring about. Instead, Oswald limps up to a fisherman, slices the man’s throat and stuffs his face with the victim’s sandwich. The final image before credits roll: a wet man in a tuxedo stuffing his face with the contents of a bagged lunch.

What does this say about Penguin? He doesn’t value anyone’s life and would literally kill for a sandwich.

What does this say about Gotham? It better have a real banger of a second episode.

What does this say about Batman? Absolutely nothing. And that’s a real shame because, to quote  Neil Gaiman’s Whatever Happened To The Caped Crusader:

“Do you know the reward you get for being Batman? You get to be Batman.”

Despite my extreme dislike of Gotham’s first episode there is still reason to stick around. The premise does have potential if the right minds turn to telling stronger character stories versus this kind of bland, tonally confused mess. My excitement is particularly stoked for episode six which IMDB lists as written by Ben Edlund, whose previous credits include an excellent episode of The Venture Bros. and a lot of episodes of The Tick.