“It seems that bad things truly happen when they happen to important people.”
– Stan Potolsky, an unimportant person

As the curtain pulls back on the massive spectacle that is Gotham City’s corruption, one thing is starting to become abundantly clear: names that you won’t find in comic books aren’t worth caring about on Gotham. In “Viper”, the currency of a personal mythology is made all the more apparent when the villain of the week points out, once again, that the real enemy in Gotham is the major wealth disparity perpetuated by the Wayne family legacy.

Lots of characters die in “Viper,” only two of them are evildoers, and none of them evoke even the vaguest inkling of audience sympathy. It’s odd, because the rest of the death toll in episode five is comprised of the homeless victims of a brutal terrorist campaign.

I’m not saying this as a criticism. Gotham doesn’t need to be The Wire in order to be good or to make salient points. I’m suggesting that a mythic class system exists in Gotham because this week, with episode five, it is finally clear what kind of story this show can tell really well. Gotham is making like an epic poem, where names are more powerful than anything else.

Dividing up into its three regular plot lines – the crime of the week, the depressing adventures of young Batman and the mob war that stands to finally make Penguin a relevant bat-villain – “Viper” has two major strengths. First, it shows us just exactly how much more we care about a mass murdering duck-footed psychopath over the nameless innocent masses of the streets. Second, “Viper” plays it clever with what could have easily been a lazy retread of a plot we’ve seen done to death (or at least certifiable insanity).

A mysterious drug plot, in modern Batman storytelling terms, screams Scarecrow. So when the case of the week sees a mysterious narcotic causing insanity, super strength and death among the homeless, the knee jerk reaction is that Dr. Jonathan Crane is going to make an appearance sometime within the hour.

The big surprise is that instead of retreading those popular waters, “Viper” gives us the early beginnings of Bane, or at least the military biochemical program that gave birth to the man who will one day break the Bat’s back. Viper, it turns out, is the unstable prototype of Venom: the mega steroid that gives Bane his bulk.

Stan Potolsky, a former employee of Wayne Enterprises subsidiary Welzien, was the lead engineer of the militarized drug. He quit the company and now, with a chip on his shoulder and a mutilated ear, he’s trying to expose the terrible things rich people are funding by unleashing the deadly prototype on the homeless population of Gotham City.

He starts with a busker named Benny, who goes on to raid the dairy section of a convenience store before using his newly found super strength to rip out the joint’s ATM and run away with it on his back.

Jim and Bullock really won me over on this case. First with their utter disbelief in regard to Benny’s superpowers and second with their buddy cop chemistry that’s finally starting to show. The detectives are hitting beats that fell flat a few episodes ago, with banter that wins legitimate laughs and some endearing honesty on Bullock’s behalf. Donal Logue is being given his time to shine with some slick one liners and an opportunity to relish in his character’s righteous ignorance and callousness that feels like it’s coming from the genuine place of having had the good beaten out of him over the course of his career.

The way that Bullock and Gordon react to the Viper victims is key to the mythology arc. We know that things get way crazier in this city, and the fact that the GCPD is floored by the suggestion that a guy could run away with an ATM is deliciously rich with dramatic irony. When Bullock’s like “No way” everyone in the audience is totally like, “Wait until you get a load of Clayface.”

Gordon and Bullock track down Benny just in time to see him succumb to the more grisly aspects of Viper, collapsing into a sack of boneless meat before being able to launch the stolen ATM at his pursuers.

That night, Stan distributes vials of Viper to all of the nameless Gotham City homeless people and sex workers. The chorus of super strength street people are all apprehended and start tearing apart the GCPD.

Traces of the drug are taken from the busker’s used vial and analyzed by Ed Nigma, who is way too excited about the whole “everyone is dying” debacle. The soon to be Riddler lets everyone in on the effects of Viper, mainly that it’s a synthetic compound converts bone mass into super powers, eventually leading its hosts to suffocate after their rib cages collapse.

The woman who gave Jim and Bullock Benny’s name, a completely kind person under the influence of a horrible drug, interrupts the planning session between the detectives, the captain and their criminally under-appreciated forensics guy, posing as a false threat to Gordon’s life before dying a boneless death.

The beat is almost comical, but it’s certainly not framed like the poor woman was worth caring about. She and the rest of her superpowered untouchable class are a collective symbol of wealth disparity, not actual people. 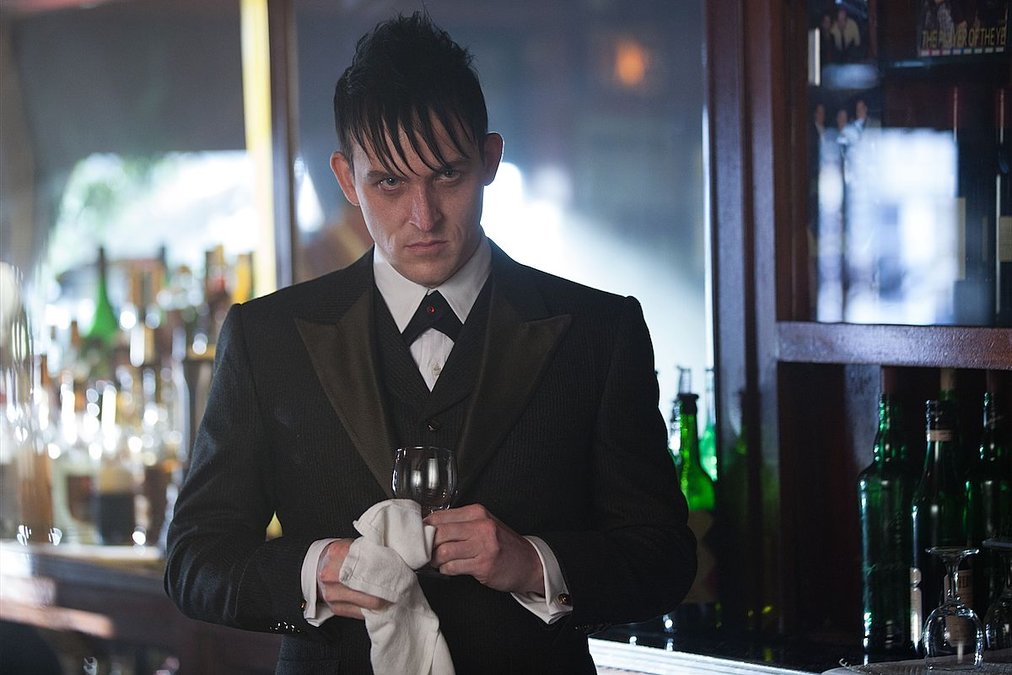 At this point, Jim Gordon is pulled into the mob war story arc when Frankie, Sal Maroni’s number one guy, requests the too noble detective join him at the restaurant where Penguin recently spilled the beans on his former Falcone associations.

In contrast to the death of the woman at the police department, in which the character was framed as just one harpie from a horde, the confrontation between Maroni and Gordon makes each of the main cast members look like Greek gods. David Zayas sits front and centre, dominating the frame and eating a lobster so big it might as well be the legendary kraken.

Maroni needs to know that Penguin isn’t infiltrating his operation, so he has a goon put Cobblepot’s head to the meat slicer while Jim corroborates the botched assassination attempt from episode one. The stories check out, Penguin is inducted into Maroni’s inner circle, and Jim has found himself in the pocket of the mob.

What’s remarkable about this scene is that the stakes are Penguin’s face. Maroni gives Jim the ol’ prisoner’s dilemma, and if he chooses self-preservation over honesty then Oswald gets sliced. That’s it. None of these characters can actually die, and in the end Gordon actually loses, ending up under Maroni’s thumb. Minutes before this, dozens of innocent people actually died terrible deaths, and its didn’t matter.

Gordon rejoins Bullock, who has been pulling his share of the case and going through Stan Potolsky’s personal effects. True to form, in one look Jim finds a lead, which when investigated brings the detectives to a mad philosophy professor at Gotham University. The villain was working with Potolsky, it truns out, and he drops the fun tidbit that Viper is the prototype of Venom. He then takes the drug himself before getting shot to death by Gotham’s finest.

The encounter leads Jim and Bullock to a Wayne Foundation fundraiser where Potolsky intends on gassing all the rich people to get the reaction he wants. A rooftop confrontation has Stan espousing on the wealth disparity of Gotham, madly (and accurately) preaching that bad things in this city only ever happen to the important people. Shots are fired, drugs are inhaled and Potolsky jumps to his death.

The case of the week ends as the detectives check out a warehouse that Stan mentioned in his ramblings only to find nothing. A Wayne Enterprises suit – the show’s new Cigarette Smoking Man character type, Molly Mathis (Sharon Washington) – watches from a car, making a mysterious phone call, positioning the billion dollar company as another faction in the war over Gotham.

Of course, that’s what little Bruce Wayne has been figuring out all episode. Still upset about last week’s Arkham compromise, the Batboy starts making a pin board of all the information needed to weed out the corruption in his parents’ company. It leads him to the fundraiser, where he meets Molly Mathis, claiming to be middle management. He presses her for answers, but is interrupted by Stan’s terrorist attempt.

It isn’t clear if “Viper” intends to have us care about the rich people in danger at the fundraiser. If it does then it fails for the same reasons that the street people are made into a horde of monsters. Stan’s assertion that bad things only happen to important people is correct, proven by his inability to target anyone of actual consequence (other than Bruce, I suppose, but that’s incidental). He got the big picture right, but he’s using the wrong metric of importance. In Gotham, the important people are the ones with cool names like Penguin, Batman and Mister Freeze, not monikers like Luncheon Guest (my condolences to the uncredited Phil Oddo)

Sadly, Fish Mooney falls somewhere in the limbo between mythic personality and chorus member. She is a fuse, burning toward what will likely be an explosive demise when she inevitably fails to kill Carmine Falcone with her secret weapon: Liza. “Viper” sees Mooney arming the girl with enough social ammo to seduce Falcone, but even when the henchwoman catches the boss’ attention by humming his favourite opera, it’s clear that none of this planning matters.

Everyone in Gotham City exists within a rich, pulpy tapestry of mythos. Unaware of the dark fate that awaits their home, each person lives to serve a handful of larger than than life crazy people who will one day don costumes and take hostages. There’s a theatrical class system in this town, and if you’re not a main player then you’re part of the chorus.